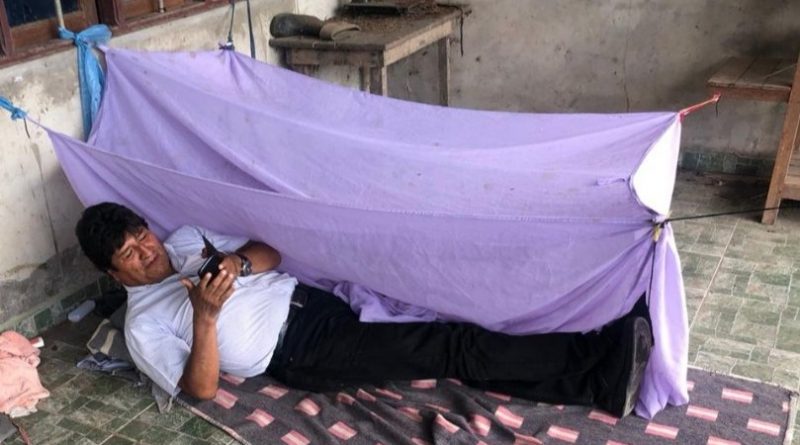 Almost 24 hours have passed since President Evo Morales was forced to resign by a coup movement led by Carlos Mesa and Luis Camacho with the complicity of the head of Bolivia’s National Police, General Yuri Vladimir Calderon and the Army Commander General Williams Kaliman, both serving for several years as police and military attaches in Washington, DC.

This is how I spent my first night after BEING FORCED to resign by Mesa and Camacho with the help of the police. I remembered old times as a union leader. Very thankful to my brothers of the Tropico federations in Cochabamba for giving us security and care. https://t.co/dMoVHzprfe

During this time President Morales posted a few tweets on his twitter account but a few minutes ago, he posted a photo showing how he spent the previous night and another one announcing that he is on his way to Mexico. Saddened by the decision to leave Bolivia but promising that he will be back with more strength and energy.

Evo Morales: sisters and brothers, I’m on my way to Mexico, grateful for the detachment of the government of that fellow people who gave us asylum to take care of our lives. It hurts me to leave the country for political reasons…Soon I will return with more strength and energy https://t.co/0KQCYAvJZR

Mexican government announced early today the granting of the asylum requested by Evo Morales following their international relations doctrine and the fact that there is a coup d’etat underway in Bolivia.

The current political status in Bolivia is very unclear at this moment but the only fact is that thousands of Bolivians demanding the return of Evo Morales are at this time on the streets of La Paz facing imminent police and military repression from those two bodies that 48 hours before refused to act against the coup plotters, but now are willing to repress the humble Bolivian supporters of Evo Morales.