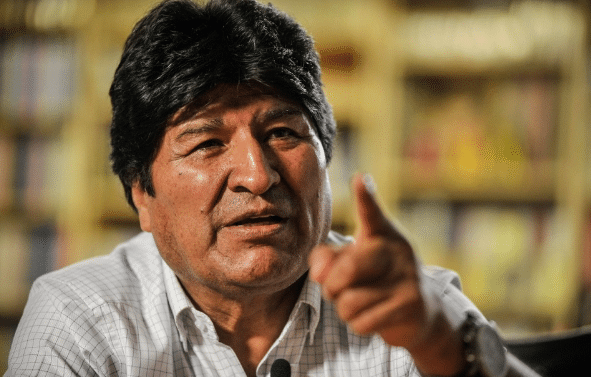 In one of his last interviews before traveling to Bolivia—the return to his homeland is scheduled for November 9—Evo Morales stated his opinion on the United States elections, where there is still no confirmation on who will be the next president. For the ex-president, however, “it does not matter who wins… The North American people vote, but do not rule. Transnational corporations rule,” Morales said.

Referring ironically to the coup that he suffered as president of Bolivia in 2019, Morales added that “if there is fraud, Donald Trump should go to Luis Almagro” (Secretary General of the electoral monitor Organization of American States, OAS). In relation to the query on the judicial move by Donald Trump’s lawyers, the leader of the Bolivian Movement for Socialism responded: “when the right wing loses, it makes accusations of fraud,” he remarked during an interview with the television network RT.

In addition, the ex-president stressed that for Bolivian society “nothing changes in economic terms” if Joe Biden or Trump wins. “The only difference would be that a fascist and racist right will lose to a moderate right,” Morales added.

The return
Morales’ return is scheduled for next Monday when the former president enters his country by land from Jujuy. In this context, Morales began his farewell to Argentina: yesterday, he had lunch with several Argentine union leaders.

Once installed, the former president of Bolivia stressed that one of the plans will be to reactivate “all the construction of so many paralyzed works.” It is also intended to “inject bonds and resources to face the economic crisis left by the de facto government.” Of course, Evo repeated again that he will not be part of the government of Luis Arce.

According to reports, on Monday morning the 9th, Morales will leave for Jujuy and then cross the land border from La Quiaca to Villazón. Once in his homeland, Evo will make a “historic trip” that will last three days by road to Chimoré “where there will be a great ceremony of welcome, and gratitude to the people for the triumph of October 18,” according to the former president’s colleagues.

The decision to travel to Chimoré is not accidental, much less the date, since Morales plans to return to that town on November 11, precisely one year after his departure to Mexico from the Chimoré airport after the coup.