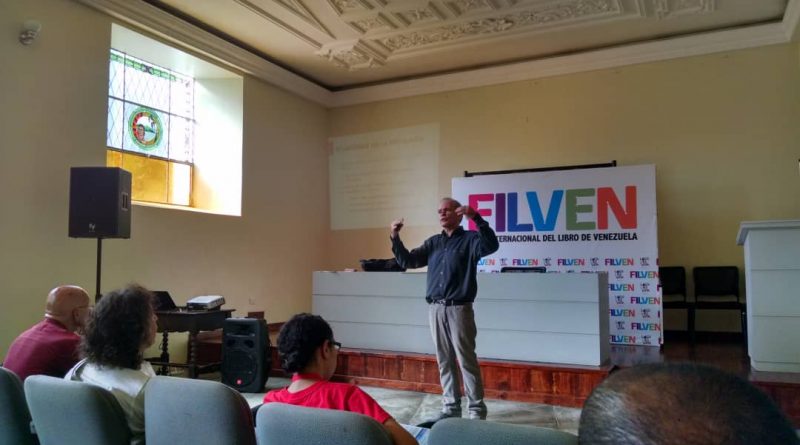 Last Friday, November 15, professor of the Simón Bolívar University (USB), Emilio Hernández, had a talk “Wikipedia: collective content development and ideological bias” as part of the forum on reading, social networks and digital media that was taught at the International Book Fair of Venezuela (Filven 2019).

In his talk, he explained the operation of the well-known collaborative web encyclopedia, its advantages and disadvantages, the hierarchies of available users (among them the famous “librarians”), the experiences, some of its rules, the ways of editing content, the cases of “wars of editions”, among many other peculiarities.

He pointed out that in the Wikipedia articles on natural sciences (biology, mathematics, physics, chemistry, etc.), based on scientific topics, experimentation and elements that can be verified, they are more or less adjusted to reality and are good quality.

However, articles on social sciences (politics, economics, sociology, etc.) and those related to some current struggle (for example, political events in countries such as Venezuela, Bolivia or Chile) are generally very biased by the same passions of the moment. “People get to edit them. As Wikipedia is a collective creation, it is edited by anyone who wishes. It’s like a semiotic and ideological battlefield,” he explained.

He indicated that “in general it is because, in social sciences, there are no absolute truths but ideological struggles . It should be a reasoned argument and not a fight of lies and fake news .”

“The Wikipedia organizers themselves have tried to fight against this phenomenon, but it is very difficult,” Hernández explained. “There have been cases in which the Wikipedia administrators themselves cannot stop expressing their own point of views and also has their own ideological bias.”

In his talk, he noted that there have been cases in which it was detected that Wikipedia editions came from IP addresses linked to companies editing their own profiles, something that contravenes Wikipedia’s standards, as well as US government agencies (including the CIA ) .

He recommended that people participate in Wikipedia, editing the articles that are wrong, “to write other complementary versions without deleting what is there, but with links to recognized sites where that version is obtained. That is part of the rules of Wikipedia, and in principle they cannot push back”.

There are people who have suggested using MediaWiki or other free software for the creation of wikis, in order to create their own Wikipedia, an experience that Cuba has tried with the EcuRed website . In this regard, Hernández said that “it is something that does not have much effectiveness in the media battle, because Wikipedia always appears in the first places of the Google search, and any page that one is going to make will not appear in the search results” of said search engine.

He gave as an example that, when searching for «José Martí» on Google, the first results are from Wikipedia, and the EcuRed articles appear only on the second or third page of results, which are usually not reached by people who search. “Then, you have to fight in Wikipedia,” he recommended.

Nor does he agree to sabotage or vandalize Wikipedia articles, because “doing that has no effect: the previous version is quickly restored.”

To those people who are afraid or annoyed by participating in Wikipedia because of the complexity of its rules or to edit the articles in it, he pointed out that “everything is achieved with practice, with perseverance, with study. You have to see other articles on Wikipedia, learn how certain things are referenced and start with very small changes and see how that evolves. Sometimes one makes a very small change and one is reversed. It is reversed by another person who is aware of what that article says.”

He explained that, if one is sure of what one is saying, “one can argue with other people (on Wikipedia) about what you mean,” and look for a serious or recognized means to use it as a reference to the argument one is giving.”

Hernández was told about the evolution in access to encyclopedias, which until only 30 years ago were only on paper, but very few families could afford their high cost and were considered a luxury. Then, the mass access to computer science allowed the appearance of encyclopedias on CD-ROM, such as the Microsoft Encarta, which allowed access to encyclopedias for many more families than before. Today, the existence of Wikipedia as a great world encyclopedia allows many more people to access immense amounts of information, provided they have access to the Internet, even with doubts about quality and bias that may exist.

For Hernández, this evolution has been positive, despite the bias that can occur in all types of encyclopedias. “Even with bias, the information can be useful for you. There are things that have bias, and things that don’t have so much bias. One has to use research on technical or scientific topics (…) that appears on Wikipedia and is well documented. But, if one is going to look for something political about a situation that is happening hot, one has to read things very carefully.”