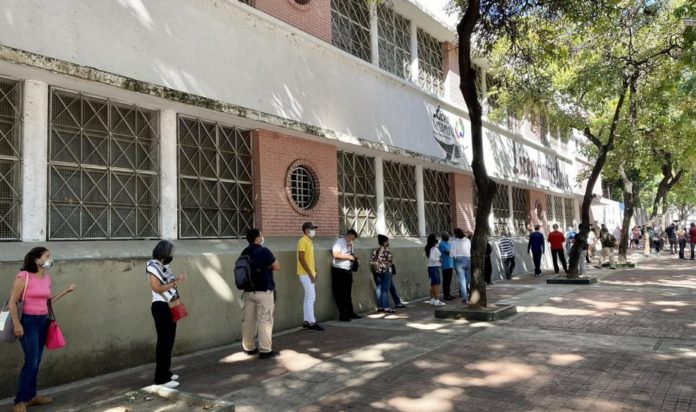 At 2:12 a.m. this Monday, August 9, the Vice President of the United Socialist Party of Venezuela (PSUV), Diosdado Cabello, presented the first results from the party’s primary elections, including those for the governorships of Venezuela’s 23 states and the Mayor’s Office of the municipality of Libertador in Caracas. Carmen Meléndez, Rafael Lacava, Héctor Rodríguez, Jehyson Guzmán, and Freddy Bernal are among the candidates whose victories are assured.

The results were announced at a press conference, after the national board of directors and the electoral commission of the political party received partial results from the National Electoral Council (CNE).

Cabello apologized to party members because, due to the CNE’s logistical limitations, 5,108 centers and only 5,116 machines were assigned (10% of those assigned in a normal election). He explained that 98% of the centers had a single machine and many centers were integrated into one. “In normal conditions, each center has three, four, five, or six machines, but in this case they had only one machine,” Cabello said, noting that the CNE is preparing for the November 21 elections.

Deputy Cabello also thanked voters who, in some cases, remained in queues for several hours for their patience and perseverance.

He noted that “capacity was overflowed.” He indicated that more than 5.5 million people passed through the electoral centers and were registered using electronic means. Of these, more than 3.5 million people exercised the right to vote. The others withdrew due to queues, fatigue, time constraints, and other factors.

Cabello recalled that winning the primaries does not necessarily mean selection as the candidate, since the National Directorate can make decisions according to the number of votes, and other factors defined in the party rules. This party rules specify that if the difference between candidates is less than 10% and the leading candidate did not receive more than 40% of the votes, the results will go to evaluation. “Here the strategic thing is the preservation of the Bolivarian Revolution and its continuity,” he stressed.

As planned, the process called not only upon the members of the revolutionary political organization, but also opened its doors to all citizens on the electoral roll—more than 21 million voters according to the latest CNE update.

Partial results
These are the results announced by Cabello, for 23 governorates and the Mayor’s Office of Caracas:

Thanks from President Maduro to the people and the UBCh
Later, in a telephone call broadcast during the PSUV press conference, President Nicolás Maduro thanked the Venezuelan people for their perseverance and their patience waiting in lines despite the limited voting machines.

He called for total unity within the party. He indicated that now comes “the unifying embrace of all the candidates, as they agreed. Whoever turned out to be a candidate must be the flagbearer for all of them.” He noted that if any rivalry is created, “they must turn the page immediately. Maximum magnanimity! If someone had a word or two, as is normal in the campaign, we must forgive, turn the page and unite in our hearts!” said Maduro.

“They ran a great campaign,” acknowledged the Venezuelan President. He also thanked the UBCh (Bolívar-Chávez Battle Units) for their efforts during the primaries.

Regarding the remaining 334 municipalities, Maduro explained that information will be officially released on Monday according to the electoral commission’s capabilities.

President Maduro also recalled that this is a week of radical quarantine, and urged Venezuelans to continue exercising caution. “The threat of the Delta variant is still present,” he said. “Today there were 100,000 cases in the US, despite the vaccination of half of its population. We cannot let it leave our mind that we are in a pandemic!”

#SeEstanMatando (#TheyAreKillingThemselves)
From Sunday afternoon through Monday right wingers promoted the hashtag #SeEstanMatando on Twitter in an attempt to discredit the great democratic process of the PSUV, in which the party leadership focused on securing the strongest candidates for the regional elections and municipal “mega-elections” scheduled for November 21.

Twitter users sharing the hashtag took three or four videos of isolated incidents in some parts of the country, and tried to present them as a sign of a division within the PSUV. In reality the videos showed some discontent related to long lines, which were limited in scope and related to voting center access.

A political analyst consulted by Orinoco Tribune let us know that “it is evident that Chavismo comes out of these primaries more robust and better prepared to run for the 21N regional and municipal elections. The heated campaigns in some areas of the country only shows that there is a healthy internal democracy, and also provides evidence of the PSUV’s adherence to the decisions of the majority, and respect for the party’s rulings.”