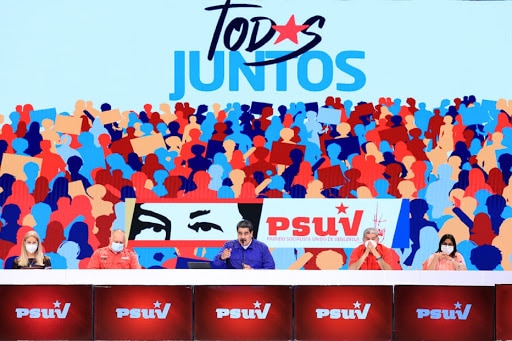 This Thursday, August 5, the United Socialist Party of Venezuela (PSUV) concludes its internal campaign process among 60,000 pre-candidates, selecting who will stand for the primary elections to be held on August 8, in preparation for the elections of governors and mayors scheduled for November 21.

The President of the PSUV, Nicolás Maduro, explained this Sunday the steps followed for participation in the August 8 Open Primary Elections (EPA) of the revolutionary organization.

For this purpose, 5,108 electoral centers have been set up throughout Venezuela so that PSUV members can choose their candidates for the regional and municipal mega-elections of November 21.

These are the details of the #EpaPSUV2021 procedure:

• Voters registered in the electoral roll must send their ID number via text message to 2406.

• Then the #EpaPSUV2021 automated system will send a message back to the voter specifying which center they will be able to vote in.

• The CNE’s integrated system will have a horseshoe shape to make the process quick and efficient.

• At the voting center, the voter must present their card to the operator of the system.

• The operator will enter the voter’s data into the authentication system and the voter’s biographical data will automatically appear onscreen.

• The voter must verify that the data is correct, the biometric verification will be performed, and the system will request the placement of the right thumbprint. It will be accepted only if the information corresponds.

• The verification process will take place onscreen and when it has been correctly captured, the machine will allow the voter to vote.

• The voter will receive the voting receipt.

• Subsequently, the voter will go to the ballot box to deposit the voting receipt and finish this process. Finally, the voter must go to the electoral registration book, which they will sign to complete the voting.

Meanwhile, during this weekend, pre-candidates in Caracas toured different areas of the capital city, sector by sector, parish by parish, to develop the Government Plan for the Mayor’s Office of Caracas, together with social movements.

Pre-candidate Jacqueline Faria stated that during this campaign she has been moved by the challenges and difficulties in the capital of the Republic, regarding the commitment to create a reinvigorated political framework that will benefit all Caracas residents.

“We toured the parishes of our capital,” wrote Faria on her Twitter account, @JacquelinePSUV. “We are acquainting ourselves again with their great strengths, and probing closely their challenges and difficulties, with an eye on providing agency to the People’s Power of Caracas.”

Likewise, Faria exchanged ideas with the inhabitants of El Junquito, aimed at establishing a strategic plan to transform the area into a productive communal development. This parish “is a territory with great potential in the tourist and productive areas,” she emphasized. “Together with its organized citizens, we will design strategies to turn it into an example of communal productive economy.”

On the other hand, pre-candidate Carmen Meléndez had the opportunity to visit another parish of the capital city, La Pastora, where she held an Assembly with the community to sound out the residents.

“Caracas is a city full of rhythm, where communities with great ideas live!” Meléndez highlighted on her official Twitter account @gestionperfecta. “In the Camino de los Españoles sector, in the parish of La Pastora, we held an assembly in which we were presented with interesting projects and needs. Count on me, let’s work together.”

In another tweet, she pointed out that “we have traveled the capital city, sector by sector, parish by parish, building the Government Plan for the Mayor’s Office of Caracas, together with the social movements, with all those who wished to approach us, and most importantly, communicating and listening.”

It is worth mentioning that last July 15, all the pre-candidates signed an act of nomination, aware that the spirit and raison d’être of the Bolivarian Revolution is based on a participatory and protagonist democracy.

Featured image: PSUV Wraps Up Internal Campaign to Elect Precandidates for 21N Mega-Elections. PSUV leadership, including President Maduro with the banner designed for the primaries. File photo by Prensa Presidencial.