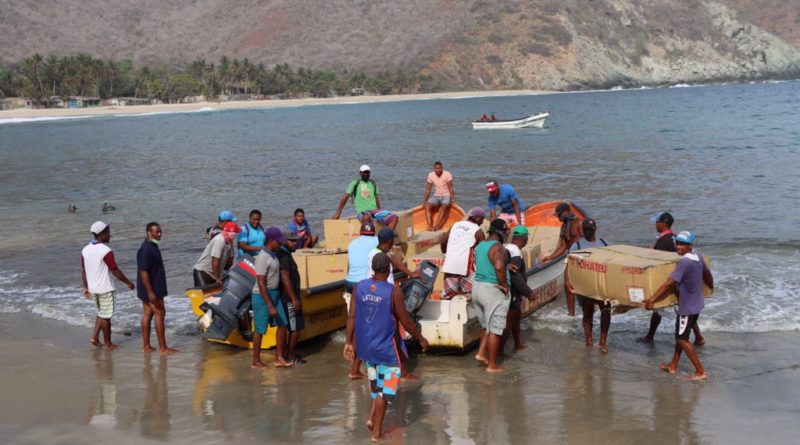 This Thursday the government of President Nicolás Maduro delivered fishing equipment to fishermen from Chuao in the Aragua state, reported the minister for productive agriculture and land Wilmar Castro Soteldo.

“In extreme economic hardship, we do not hide, with the little we have we have come, we did not come to offer yachts, nor one motor per person,” he said, delivering 10 40HP motors for boats, 50 life jackets and 10 boxes of hooks to the “Asociacion Unica de Pescadores de Chuao” also know as “Los Compas”.

Minister Castro Soteldo, in the company of the governor of the Aragua state, Rodolfo Marco Torres, explained that the act in defense of the homeland of the people of Chuao against the plans of invasion and coup d’état against Venezuela, must transcend in human terms; with work, will and brotherhood.

He asked fishermen to make a production proposal that would allow a percentage (10%) of the fishing to be allocated to the different state nutrition programs. He highlighted, Fairs of Sovereign Field and School Feeding Program, among others, “it won’t be a payment, it is a compensation for the equipment delivered.”

“This is sent to you by President Nicolás (Maduro), we must take care of it and preserve it, and more is coming, we have little and we are going to distribute it to everyone. The best way for it to yield, is for us to organize ourselves,” the agricultural minister added.

Featured image: Fishermen in Chuao, Venezuela, unload a gift from President Chavez as a gesture after their heroic neutralization of mercenaries last Monday. Courtesy Ministry of Agriculture.