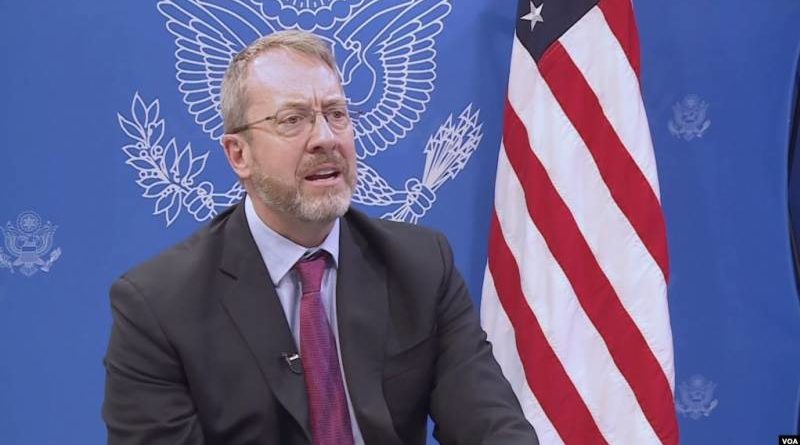 James Story – Donald Trump’s newly appointed Ambassador to Venezuela – named as one of those responsible for the failure of the frustrated terrorist incursion last Sunday, May 3, in Venezuela, came out to defend his accomplices in the Colombian and US government.

As the president of the republic, Nicolás Maduro, indicated this Thursday, this unsuccessful conspirator insists on trying to intimidate the legitimate government of Venezuela, assuming that his country is too powerful to be defeated and trying to make unaware people believe that the US is not capable of doing such covered operationes, when they are in reality the ones that invented them.

“James Story is the last Charge D’Affaires of the US in Venezuela. We expelled him. He has an office now in Bogotá, Colombia, he is based there. I can tell you and this is going to prove that James Story is responsible for the failure of this armed mercenaries incursion that was defeated militarily in the bay of Macuto. Jame Story has his feet, his hands and his whole body in this armed raid, ” said the Venezuelan head of state, Nicolas Maduro in a special interview with Telesur.

We call this in Venezuela "correr hacia adelante" sort of "distraction maneuver" The covered mercenary operation failed so let's do something fast to distract public opinion. James Story first US Ambasador 2.0…that means without hosting countryhttps://t.co/Y4XTkJAj0q

“James Story, Elliot Abrams and Mike Pompeo are responsible for the failure of Macuto Bay and what (Donald) Trump (US President) does is reward him,” added the national president. Referring to the recent announcement from the US Department of State appointing him as the new US Ambassador to Venezuela in a distracting US maneuver to cover the fiasco of what has been called by several analysts “the Venezuelan Bay of Piglets” mercenary operation.

“The US diplomatic history is very problematic due to their racist and supremacist approach to dealing with other countries, invading countries or promoting coup d’etats, but I believe this is the first time the US appoints an Ambassador without having a hosting country, meaning that he won’t be able to work in Venezuela where the legitimate president, Nicolas Maduro, is not recognized by the US regime,” a diplomatic expert said to Orinoco Tribune.

“Story repeated the arrogant Pompeo approach saying that “if we (the US regime) had been involved it would have gone differently.” But he forgets to say that even in the Cuban Bay of Pigs, the US promoted invasion, the US regime and the CIA denied their involvement until 1990 even after losing four military officers. And he even dared to mention Osama Bin Laden as a trophy of purity forgetting to say that it was the CIA that created that monster, using him and the Taliban in Afghanistan to counter Soviet presence in Central Asia during the 80’s,” he added.

Featured image: Story came out to defend his accomplices in the government of Colombia and the US after the resounding defeat in Macuto and Chuao