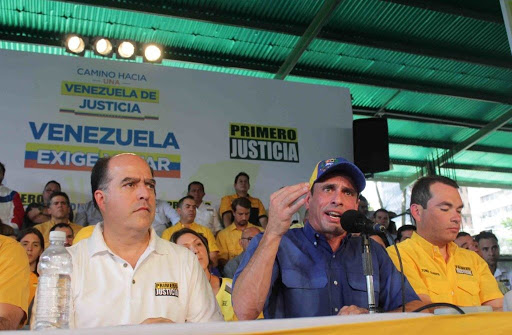 Venezuelan opposition party Primero Justicia (PJ), one of the core anti-Chavista political parties in Venezuela forming what is called the G-4, condemned this Friday through a statement published on its account twitter account, the events registered on the coasts of La Guaira and Aragua state, a mercenary action called “Operation Gedeón” where the government captured several subjects involved in violent plans against the country.

The party demanded Juan Guaidó dismiss the officials responsible for “Operation Gideon” and to reform the “Center of Government” in a statement published on May 8. Currently hard core anti-Chavista Henrique Capriles Radonski and Julio Borges are the leaders of this political party.

The “Government Center” is controlled by Leopoldo López as coordinator of the organization and Julio Borges as presidential commissioner for external relations. It is a sort of cabinet for Guaido’s virtual presidency.

The party, led by Borges and Capriles, listed three specific demands in the document:

1.- Immediately dismiss the officials who, on behalf of the “Presidency of the Republic”, associated with these actors from illegal groups.

2.- Reframe the decision-making mechanisms in the opposition and the role of the Government Center so that unity is truly respected and the focus of the political struggle is again placed on Maduro’s departure from power. We are concerned that the energies are placed on creating a bureaucratic caste and not on political change.

3.- Carry out an independent investigation by the National Assembly so that it is possible to establish responsibilities. It is not enough to point out that the operation of illegal groups was infiltrated by the intelligence services of the Maduro regime.

RELATED CONTENT: Why is Juan Guaido not in Prison?

“As Venezuelans we demand the truth of what happened, these types of actions violate the confidence of the people and those who seek to fight for political change,” they said.

This political move within the G-4 represents a strong signal of a long standing division inside the hard core political nucleus of anti-Chavismo, erupting just less that 5 days after the neutralization, by President Maduro, security agencies and local militia, of a US backed mercenary operation in the South American country.