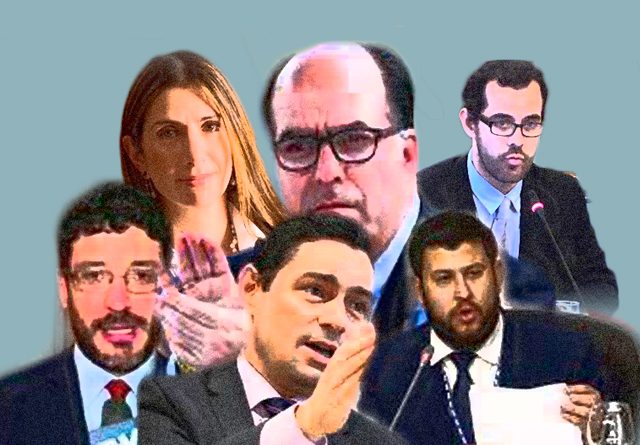 Five men and one woman are the operators designated by the self-proclaimed “president” Juan Guaidó to take control of the assets of Venezuelans in the United States.

They are directly responsible for the illegal coercive measures (such as the seizure of assets and the commercial blockade) that the Trump administration approved Monday night, which threatens to sharpen the scarcities in the South American nation.

This is Julio Borges, Carlos Vecchio, David Smolansky, Francisco Márquez Lara and Yael Marciano Cohen, who have publicly participated since January in negotiations with US government officials such as Vice President Mike Pence.

To these should be added José Ignacio Hernández, appointed at the end of February as alleged special prosecutor abroad.

With the exception of Smolansky, all are lawyers, trained in the United States and Europe and the only ones that do not belong to the “Voluntad Popular” party, are Mrs. Marciano, Hernández and obviously Borges, “Primero Justicia” coordinator.

Vecchio was designated as “ambassador” in the US and has as direct advisors, Francisco Márquez and Yael Marciano.

Borges and Smolansky are responsible for maintaining links with the Lima Group and the OAS.

While Hernández is in charge of legal operations.

Who is who?
Carlos Vecchio, 49, a lawyer and politician educated at the Kennedy School of Government at Harvard University. He is one of the leaders of the Popular Will party and lives as an exile in the south of the state of Florida, USA, since 2014. He was associated with an opposition activist named José Pérez Venta, accused of dismembering an opposition woman (Liana Hergueta) whom he lent him money during the expressions of violence in 2014 (Guarimbas).
Julio Andrés Borges, lawyer of the Andrés Bello Catholic University with studies in political and social philosophy at Boston College, in the United States and in public policy and studies in Latin America, at the University of Oxford in England. Founder of the Primera Justicia party, financed with US funds provided by the National Foundation for Democracy (NED) through an NGO for its maintenance and actions. A few months ago a video circulated on social networks in which Borges appears fleeing after hitting a child (that eventually died) and not helping him. The then deputy of the National Assembly never denied it or spoke about it.

Borges has always been linked to conspiracy activities and in 2015 he was involved in the plan to overthrow Nicolás Maduro in the so-called “blue coup”, according to confessions of Brigadier General, Oswaldo Hernández Sánchez, who said it was he who drew the tactical points that would be bombed by the military in Caracas. (He is also allegedly the mastermind of the assassination attempt on President Maduro with drones last august 2018).
David Smolansky: Journalist and Politician, leader of the Popular Will party (of Leopoldo López and far right). Former mayor of El Hatillo. Active participant in the acts of violence that occurred in the country in recent years and in August 2017. He was sentenced by the Constitutional Chamber of the TSJ to 15 months in prison and was banned from leaving the country. He was appointed by Guaidó “coordinator at the OAS for the Venezuelan refugee crisis.”

RELATED CONTENT: Guaido Planned and Led CITGO’s Looting and Now: “It’s Not my Fault”?!
Francisco Márquez: Popular Will activist and member of the Harvard Ash Center for Democratic Governance and Innovation. He graduated as a lawyer from UCAB and completed a Master’s degree in Public Policy at the Kennedy School of Government at Harvard University. He is a political advisor for Carlos Vecchio with whom he has participated in meetings with the Vice President of the United States, Mike Pence, where the sanctions against the country have been studied and analyzed. He is currently an “official” at the supposed Guaidó embassy in Washington.
Yael Marciano: is the only woman in the group of negotiators and managers. She is a member of the GCL Advisory Committee. She graduated as a lawyer and is the founder of Strathos Consulting. Member of the Advisory Committee of the Latin American Leadership Program at Georgetown University. She has been presented as an advisor to Carlos Vecchio. She was the wife of financial speculator Moris Beracha, whom they relate to irregular power groups. She is the daughter of an alleged arms dealer of Hebrew origin, as noted by anti-Cuban right-wing Robert Alonso on his Twitter account.
José Ignacio Hernández González: is a 44-year-old lawyer graduated from Andrés Bello Catholic University. He was appointed by Juan Guaidó as special prosecutor. He studied at the Complutense University of Madrid. He is part of the law firm Grau, García Hernández & Monaco, which represents Empresas Polar. He is a member of the Center for International Development led by economist Ricardo Haussmann at Harvard University.