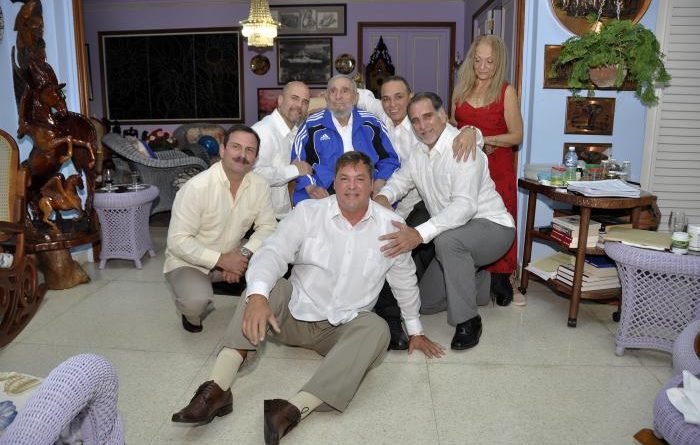 It was December 17, 2014. The entire town, fighting for and demanding their return, became witness that the prediction of the Commander in Chief was fulfilled. The Five, all, were returned to their Homeland.

It was a day of celebration and tears. The latter very difficult to contain before so much emotion. The television captured every moment, since the airplane that brought Gerardo, Antonio and Ramón approached the space of the José Martí terminal, in Havana, until the door opened and Gerardo showed up on the stairway, then Antonio and finally Ramón. How to forget the hugs of the heroes with their relatives there! The emotional embrace of Raul, who was waiting for them in the name of Fidel and all the people.

RELATED CONTENT: The Freedom of the Cuban Five Will Never be Reversed

The convictions came true. The Five, fulfilling their duty to the Homeland, knew that the entire people wanted to hug them, that the children would hurry to kiss them, that the young people are more committed by the example they radiated.

When this Tuesday 17 marks five years after that happy arrival in the Homeland, the Cuban Five strengthen their worth as patriots and undertake tasks, perhaps less risky, but also heroic, as professionals who are, as ever revolutionaries, and as children of the Homeland that was lacking something five years ago, when they were still in dark US prisons.

They knew how to serve those long and unjust sentences with dignity and were always sure that only about 90 miles from that dark precipice was a country completely mobilized to demand their return, and a leader who, with the conviction and security of always, had declared: “They will return.” And so, Raul fulfilled it.

But the battle for the return of the Five, in addition to becoming increasingly massive in Cuba, crossed seas and oceans to become a banner in a solidarity movement from hundreds of countries, including the United States.

The return of Gerardo, Antonio and Ramón completed the happiness of a people that before, on October 7, 2011, endorsed the emotion of René’s liberation, and on February 27, 2014, that of Fernando.

These are five young ordinary people, formed entirely by the Revolution, all prepared to fulfill any mission in favor of their homeland.

They are men consecrated in the work we build and always put their faith in victory ahead of them, which is accompanied by a noble and sincere smile, typical of the heroes they are.