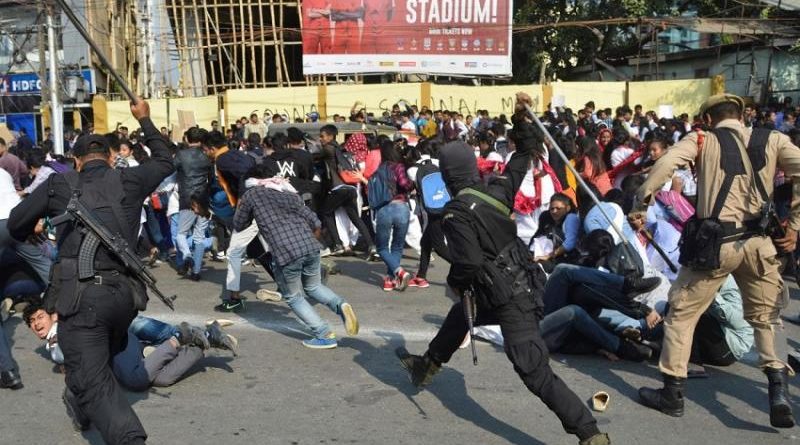 Increasingly violent protests are sweeping the self-professed “world’s largest democracy” as its people fight to protect the secular nature of their state following Prime Minister Modi’s decision to push forward with a religiously discriminatory citizenship amendment, with this national uprising being met with the disproportionate use of force by law enforcement authorities who are showing zero concern for the collateral damage that they’re causing, especially after they stormed the Jamia Millia Islamia (JMU) university on Sunday and injured at least 100 students.

Who Really Wants A “Hindu Rashtra”?

The author wrote last week that “The ‘Indian Balkans’ Are Burning & It’s All Because Of Modi”, but following this weekend’s events, that title should be changed to read that India as a whole is ablaze after protests against the religiously discriminatory “Citizenship (Amendment) Bill” (CAB) spread from the Northeastern “neo-colonies” to the so-called “mainland” after sweeping through West Bengal on the way to the capital of New Delhi. The increasingly violent protests that are spreading across the self-professed “world’s largest democracy” are driven in a large part by a significant segment of the population’s rage at their government’s efforts to change the secular nature of their state, which the ruling BJP never shied about doing and proudly boasted about in its re-election manifesto earlier this year. They of course didn’t word it that way but their entire platform could be read as pursuing the de-facto imposition of a so-called “Hindu Rashtra” (Hindu fundamentalist state) despite approximately 20% of its over one billion people being religious minorities.

Some Indian media have attempted to falsely portray the protests as being entirely comprised of disaffected Muslims, which while true to an extent, fails to account for the critical mass of native Assamese in the “Indian Balkans” who are protesting against it as well as the many secular citizens of the capital, all of whom are united in their belief that India should stay true to its secular constitutional roots. It was only a matter of time before large-scale unrest of this nature exploded inside the country, but the BJP has been playing with fire for so long and rarely met with any significant opposition that it felt entitled to push the limits of acceptability by passing the contentious CAB which for all intents and purposes turned India into a de-jure Islamophobic state. For those that aren’t familiar with what’s going on or are still a little bit confused about everything, CAB facilitates the granting of citizenship to all non-Muslim (mostly illegal) migrants currently living in India so long as they came from Afghanistan, Bangladesh, or Pakistan and claimed to be fleeing religious persecution.

The Roots Of A Revolution?

It not only violates the 1985 Assam Accord reached between the central government and anti-migrant protesters from that state during that time (thus explaining the indigenous population’s outrage there), but it also allows all other non-Muslim migrants from those countries a fast-track to citizenship under the same pretext, which has raised serious concern among the Assamese (which are the majority ethnicity in the ultra-diverse “Indian Balkans”) that Bengali (mostly illegal) migrants will continue to overwhelm them whether they’re Muslims, Hindus, or whatever else. India is therefore in the midst of multiple converging identity crises concerning the fear that the indigenous people of the Northeast (mostly Assamese) already have of their culture being overwhelmed by Bengali migrants (whether Muslim or non-Muslim) as it is, the Muslim minority’s fears that their government is preparing to ethnically cleanse them (considering its recent annexation of Kashmir, its plans to intern nearly two million mostly-Muslim “illegal immigrants” in “concentration camps” prior to deportation in the coming future, and their already miserable existence as second-class citizens), and secular-constitutionalists’ fierce objection to the ruling party turning their country into a “Hindu Rashtra”.

This is a Molotov cocktail of socio-political destabilization if there ever was one, and the fact of the matter is that the ongoing violence could have been avoided had Modi not gone forward with his radical religious “reformation” of the country. Nevertheless, what’s done is done, and India is now forced to contend with its most serious nationwide crisis since its infamous state of emergency from 1975-1977. Train stations are ablaze, vehicles have been torched, curfews have been imposed and the internet has been shutoff in parts of the country, and several people have already been killed. To make matters worse, the police stormed the Jamia Millia Islamia (JMU) university on Sunday and injured at least 100 students, with video footage of the raid going viral all across Mainstream and Alternative Media since then. India’s law enforcement officers have shown that they have zero concern for the collateral damage that they’re causing, which dangerously risks exacerbating the protests even further per the typical dynamics inherent with these scenarios. Making matters worse, the Indian Foreign Minister refuses to recognize the legitimacy of the protest movement, instead fearmongering about “jihadists, Maoists, and separatists getting into student activism” in what might hint at a violent crackdown.

Modis has therefore found himself in a dilemma purely of his own making and one from which he can’t extricate himself without some serious self-inflicted collateral damage to his reputation. On the one hand, doubling down and throwing his full support behind the police’s evident abuses of their authority will pour fuel on the fire that’s spreading all throughout the country, as well as risk international condemnation (most likely led by the majority-Muslim countries of the “Ummah” such as the global pivot state of Pakistan and potentially even involving India’s “junior partner” Bangladesh too, with unpredictable consequences for domestic stability in that increasingly authoritarian second-mentioned state) that might even reach the UN General Assembly level if the crisis isn’t contained soon enough. On the other hand, however, condemning the police for injuring innocent students who weren’t even involved in the protests and signaling an intent to backtrack on CAB would enrage his ultra-nationalist base and risk splitting the BJP and its myriad allies, thus leading to a political crisis in the ruling elite.

The Indian leader must therefore weigh the consequences of each choice, though given his “strongman” style and idolization of “Israel”, it’s likely that he’ll opt for the first-mentioned course of action despite it running the risk of perpetuating the self-sustaining cycle of violence that could prospectively lead to the forthcoming imposition of another state of emergency in the worst-case scenario. No matter what happens, though, India has debunked its own self-professed claims of being the “world’s largest democracy” after the international community became aware of its religiously discriminatory citizenship amendment and is seeing with their own eyes the government’s proclivity to use disproportionate force against its own citizens, including students who weren’t even involved in the increasingly violent protests but were simply collateral damage when the police aggressively stormed their university and started firing tear gas and whacking their batons every which way. Looking forward, while the protests might eventually be contained by whichever means the government ultimately resorts to (including the most violent), the shift in international perceptions about the true state of India might be just as irreversibly negative as it’s been for “Israel”.