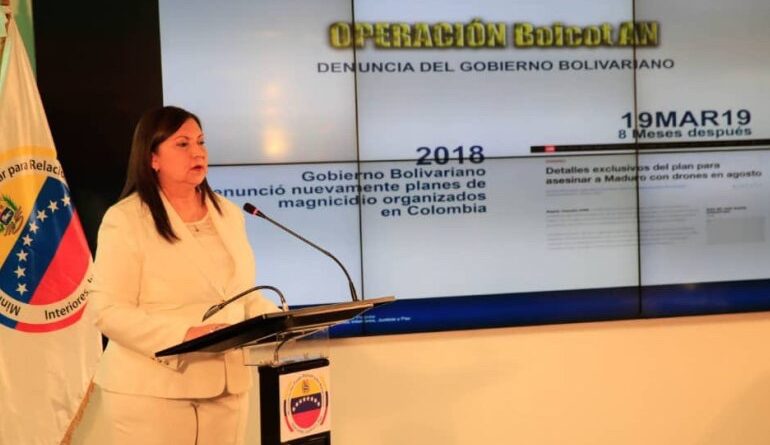 Venezuelan authorities managed to neutralize a new terrorist operation, orchestrated by the national and international right wing, that planned to sow chaos in the Caribbean country and prevent the installation of the new National Assembly (AN), scheduled for next January 5.

This was announced by the Venezuelan Minister for Interior Relations, Justice and Peace, Carmen Meléndez, during a press conference offered this Tuesday, December 29. Meléndez stated that the operation was headed by the fugitive from justice Leopoldo López, and financed by Iván Somonovis with international support.

According to Meléndez, the attack was scheduled to take place between December 27 and January 5.

She commented that among those involved is a subject identified as Ronald Enrique Flores Rivero, alias “Fido Dido” or “El Flaco,” detained on December 24 in the state of Trujillo.

According to the minister’s statements, Flores Rivero confessed that he met with a group of Venezuelans and Colombians, including three alleged agents of the National Intelligence Directorate of Colombia, in Riohacha (Colombia) on December 21, for the planning of the terrorist plot.

Meléndez said a number of operators and financiers of the operation have been arrested. The plotters planned to penetrate Venezuela’s Zulia, Tachira, Apure and Bolivar states with subversives trained in  Colombia.

Venezuelan authorities are offering rewards to anyone who has additional information regarding the plot.

“We have frustrated and neutralized it, but we have to be vigilant, on alert… We remain alert to any threat from the daily right-wing siege against the peace of the Venezuelan people,” she stressed.