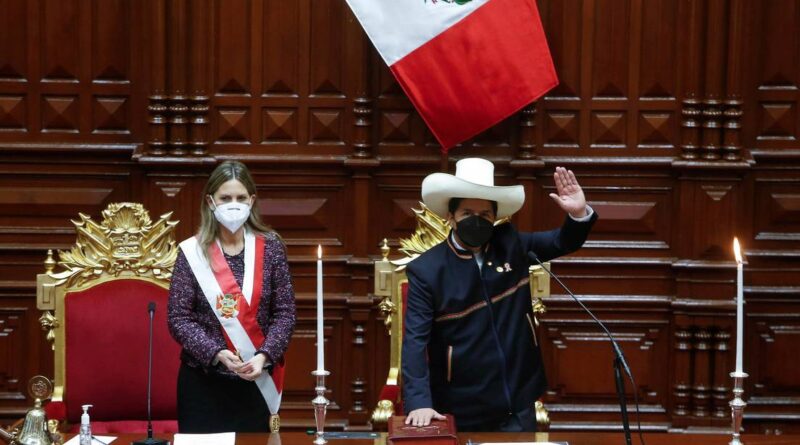 José Pedro Castillo Terrones, a 51-year-old teacher of a rural school, assumed the charge of the presidency of Peru today, July 28, a day full of emotion when the country also celebrated 200 years of independence.

“I swear by the peasants, the indigenous peoples, the ronderos, the fishermen, the teachers, the professionals, the children, youth and women, that I will hold the office of the president,” said Castillo as he took oath in the parliament. “I swear by the peoples of Peru, for a country without corruption and for a new Constitution.”

The union leader who ran as a candidate for the leftist Peru Libre party thus began his tenure for the 2021-2026 term, with missions of controlling the spread of COVID-19 in the country, reducing poverty after more than 3 decades of neoliberal policies, and providing political stability to a country that has seen four presidents in just five years and a rain of corruption charges.

The inaugural ceremony was held at the headquarters of the National Congress, where its president, María del Carmen Alva Prieto, placed the presidential sash on Castillo, who was then sworn into office and offered his first official message during the solemn ceremony.

“I begin by greeting my brothers and sisters the indigenous peoples, my brothers and sisters the ronderos, the teachers, the Quechuas, the Aymara, the Afro-Peruvians, I speak to you on the 200th anniversary of the declaration of independence of Peru, two centuries of republican life. It is an honor for me to be at this place,” said Castillo in his first speech as the president of Peru.

The new president explained that, although this commemoration is highly symbolic, in reality the history of the nation comes from strong, ancient and millennial cultures.

“During four and a half millennia our ancestors found ways to live in harmony with the rich nature that providence offered us,” continued Castillo. “It was like this until the men of Castille arrived, who, taking advantage of a moment of chaos and disunity, managed to conquer the State that until that moment dominated a large part of the central Andes. With the defeat of the Inca Empire started the colonial era.”

Memory
The viceroyalty, added Castillo, allowed the establishment of castes and differences that persist even today. “The three centuries that this territory belonged to the Spanish crown, they exploited the minerals that sustained the development of Europe, largely with the labor of the grandparents of many of us,” he said.

In a detailed historical account, Castillo highlighted that the independence of 1821 did not bring any real improvement for the majority of Peruvians, since the so-called aboriginals continued to be exploited and treated as second-class citizens. “Over time, the old Afro-Peruvian community that had been forcibly brought was added to that from China and Japan, whose blood enriched our veins but who also suffered the same pain as us,” he added.

The president clarified that he was not referring to a remote past, since regimes of slavery and violence persisted until late 20th century, since many farms were sold along with peasants who worked there, and thousands of Peruvians lived in servitude until 1979 when the entire population obtained the right to vote.

However, added Castillo, the social advancements achieved by the people were truncated with Alberto Fujimori’s coup in 1992. “After that, our country has grown under various governments that came to power with the popular vote, however, they have all disappointed us. This time there is a government of the people that has come to govern with the people and for the people,” he promised amidst huge applause.

Castillo stressed that this is the first time that Peru will be ruled by a peasant, a person who belongs to a sector that has been oppressed for so many centuries.

“This is also the first time that a party formed in the interior of the country has won the elections and that a teacher, more precisely a rural teacher, has been elected to be the president,” asserted Castillo. “The pride and the deep pain of Peru runs through my veins. I am a son of this country that was founded on the pain of my ancestors. The history of this silenced Peru is also my history. I want you to know that you have my word: I will not disappoint you.”

Priorities
Castillo explained that the priorities of his government will be attention to the COVID-19 pandemic and the economic reactivation of the country.

Regarding the pandemic, he assured that efforts will be maximized to guarantee total vaccination of the population in the shortest possible time. In addition, he promised that during his administration he will promote the creation of a universal, free and decentralized public healthcare system.

With regard to the economy, he regretted that in the last 30 years the shortcomings of the neoliberal model implemented in the 90s have been discussed without any government listening to the majorities who demanded change.

“The population demands changes,” said the new president. “Is it true that these changes imply putting the achievements of the last decades at risk? No, it is not. It is possible to carry them out responsibly, respecting private property, but putting the interests of the nation first.”

In this regard, the president sent a clear message to his opponents who promoted a “campaign of fear” in which they claimed that he was a communist leader who would expropriate savings, houses, cars and factories.

“We will not do any of that,” President Castillo stressed. “We want the economy to maintain order and predictability, which is the basis of investment decisions… We do not intend to even remotely nationalize the economy or apply an exchange control policy. What we want is that the families, especially those with lower incomes, are more stable and prosperous,” he clarified.

Reforms
During his speech, the president referred to Lava Jato, the international corruption scandal that, in Peru, involved former presidents Alejandro Toledo, Ollanta Humala and Pedro Pablo Kuczynski. Yet, paradoxically, no businessman has been arrested. “That cannot not correct,” said Castillo.

He also declared the creation of the Ministry of Science and Technology of the government of Peru, the renaming of the Ministry of Cultures so that the diversity of the country is recognized, and making military service mandatory for young people who neither study nor have work. He also insisted that he will lead an effective fight against corruption and promote a new Constitution.

“Everyone knows that one of our main campaign promises, which is also a principal demand of most of the people, is the convening of a Constituent Assembly for changing our political and social reality,” Castillo added. “We will insist on this proposal within the framework of the law. We will present before the Congress a bill to reform the Constitution that, after being analyzed and debated by parliament, we hope can be approved in a referendum,” explained the president.

Before the swearing in ceremony, interim president Francisco Sagasti had handed over the charge to the Legislative, since he, not being the elected president, could not hand over the presidency directly to Castillo.

Later, Castillo went to the Lima Convention Center to greet the Latin American presidents and delegates who attended the inauguration ceremony.

US already pressuring Peru for destabilizing agenda in Latin America
In a letter published on the US Department of State website and that of the US Embassy in Peru, the US hegemonic diplomacy once again evidenced its true nature by trying to push the new Peruvian administration of Pedro Castillo towards destabilizing US agenda against Venezuela, Nicaragua and Cuba.

Great to speak with Peruvian President-Elect @PedroCastilloTe and offer my congratulations today. We're grateful for our enduring partnership with Peru on inclusive economic growth, education for all, increased citizen security, and defense of democratic principles.

The US State Department sent a belated congratulation to Castillo for his victory that was plagued with several weeks of sabotage and violence promoted by Peruvian right wingers allied with the United States, and the Biden administration raised zero criticism on the delay of Peruvian authorities to recognize his victory. Without mentioning any of this, the press release stated that “the Secretary of State Antony J. Blinken spoke with Peruvian President-Elect Pedro Castillo and offered congratulations to the people of Peru for an electoral process indicative of a strong and vibrant democracy.”

“He thanked Peru for its support in addressing the Venezuela crisis, and expressed his hope that Peru would continue to play a constructive role in addressing the deteriorating situations in Cuba and Nicaragua,” continued the document, clearly trying to exploit Castillo’s legislative weakness to US advantage, and to force him to go against the most progressive Latin American countries that are demonized and sanctioned and are suffering constant US-led destabilization operations just for being independent and maintaining relations with China and Russia.