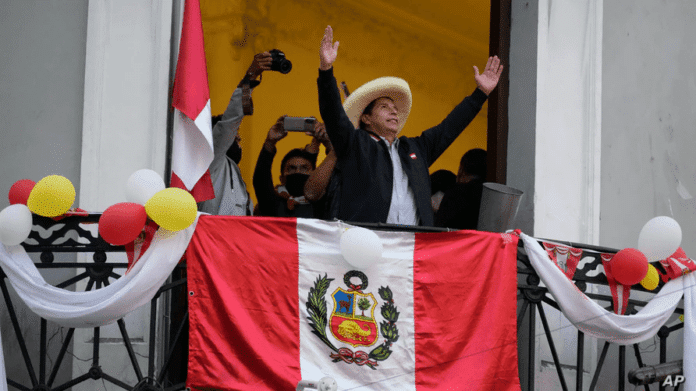 Monday, July 19, after 43 days of waiting since his victory in the second round, Peruvian authorities of the National Elections Jury finally proclaimed Pedro Castillo president of the Republic of Perú.

This was announced by the electoral jury through a statement that confirmed the final calculations. The president received 8,836,380 votes, for a total of 50.12% of the vote, against 49.87% of his rival, Keiko Fujimori. Castillo won the election by approximately 44,000 votes.

As it will be recalled, Keiko Fujimori, the candidate of the extreme right, daughter of former president Alberto Fujimori, tried to overturn the voters’ expression by challenging the minutes. However, these legal challenges did not advance to the jury.

On Monday, Pedro Castillo participated in a videoconference with the electoral authorities of Perú to confirm the decision of the National Office of Electoral Processes of Peru (ONPE), following a very unusual delay of more than five weeks.

Despite the many violent incidents led by Keiko Fujimori’s followers, Peruvians thronged into the street to celebrate the long-awaited decision and express their support for the new leftist president, as reported from the city of Chota by the Argentinian journalist Marco Teruggi, in a video posted on his Twitter account.

Venezuela congratulates the Peruvian people
Upon hearing the proclamation of Pedro Castillo as Peruvian head of state, Venezuelan Foreign Affairs Minister Jorge Arreaza published a statement, on behalf of the government of the Bolivarian Republic of Venezuela, commemorating the victory for democracy that took place on June 6, the day of the historic vote.

“The massive participation of the Peruvian people at the polls is a sign of their undeniable democratic will in defense of popular sovereignty,” wrote Arreaza’s official statement. “The humble, the men and women of the countryside, the male and female teachers, the working class, the young people, the indigenous peoples, have decided to be protagonists and have marked with their votes the course that Perú must follow, towards a new horizon of hope, justice and equality.”

Likewise, the government of President Nicolás Maduro sent its wishes that the new management of Pedro Castillo and his Perú Libre party assume with great wisdom and success the direction of the sister nation’s destiny.

Maduro ratified his willingness to “work hand in hand with the new Government of Perú, in order to develop a bilateral relationship of comprehensive cooperation, thus honoring the memory and immortal example of Father Liberator Simón Bolívar, the Grand Marshal of Ayacucho Antonio José de Sucre, and that heroic generation of brave men.”