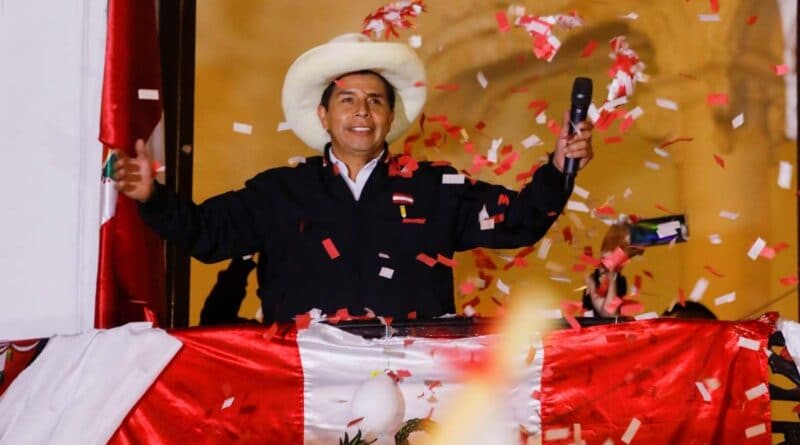 Due to her false allegations of electoral fraud seeking to annul votes from rural areas where Castillo won with wide margins, the prosecution has initiated an investigation against Keiko Fujimori for crimes against the right to vote and false statements.

Peruvian electoral justice authority finished reviewing, and rejected, due to lack of evidence, all the claims of right-wing candidate Keiko Fujimori to annul the votes obtained by Pedro Castillo, a method by which she had tried to snatch the victory from the leftist candidate. Thus, after a long wait of more than a month, it has been confirmed that the rural teacher and trade unionist who comes from one of the poorest Andean areas of Peru will be now proclaimed as president-elect. He will take office on July 28.

The right wing has responded with violence in the streets and with one last maneuver to delay Castillo’s proclamation, but it will not be able to reverse his victory now.

After all the claims of the right-wing candidate were rejected, on Friday, July 16, Fujimori lawyers filed new appeals on a group of minutes, this time alleging counting errors. The total number of votes appealed through these actions is significantly less than the margin of over 44 thousand votes that Castillo has on Fujimori. Therefore, whatever the outcome of these appeals, which electoral experts estimate will most likely also be rejected, the result of the elections will not change.

Due to her false allegations of electoral fraud seeking to annul votes in rural areas where Castillo won overwhelmingly, the prosecution has launched an investigation against Fujimori for alleged crimes against the right to vote and for making false statements. With all legal paths exhausted, the right wing grouped around the current head of the Fujimori clan is now playing the card of delegitimizing the next government and boycotting its administration. If they cannot prevent him from taking office, they will try to remove him from power. Since Castillo’s victory at the polls last month, the right wing has been promoting a coup to annul the elections. Now, as the victory of the left has been confirmed in the last electoral stage, Fujimori and her allies have gone from verbal violence to physical violence in the streets.

This week, fascist Fujimori supporters, armed with sticks, tried to reach the Government Palace in the center of Lima, shouting insults against President Francisco Sagasti, repeating the accusations launched by Keiko against the present head of state, accusing him of having sided with Castillo. All evidence, however, demonstrates the neutrality of the government. The Fujimori mob unleashed its fury against the businesses in the nearby streets. A photographer for the newspaper La República, one of the few media outlets that has not supported the claims of the right to ignore Castillo’s triumph, was thrown to the ground and beaten by several mobsters. In their unbridled anger, the Fujimoristas launched it against everyone, including journalists from the media who have been supporting the false discourse of electoral fraud. A television reporter and her cameraman were surrounded, insulted and threatened. Another reporter was attacked from behind by a woman, who covered her head with a flag and began to pull at her. The mob surrounded the car of the Minister of Health, Oscar Ugarte, who was going to a meeting of the Council of Ministers, and began to push the car and beat it with sticks. The same happened to the Minister of Housing, Solange Fernández. About fifteen minutes passed until the police was able to disperse the attackers and the ministers were able to resume their journey to the Government Palace.

The group that unleashed the violence calls itself “The Resistance” and for years it has been acting as Fujimori shock force. Now they have renamed themselves as “The Insurgency.” In the past, they had attacked the prosecutor who has investigated Keiko and accused her of money laundering and criminal association, and also journalists critical of Fujimori. Those of “The Resistance” like to take photos doing the Nazi salute. In the acts of violence this week, some wore vests with the fascist slogan “God, Country, Family” written on the back.

Keiko Fujimori tried to distance herself from the violence unleashed by her followers with a tweet in which she criticized those actions, but her long relationship with that extremist group cannot be hidden. Her speeches calling on her followers to mobilize against an electoral fraud that is non-existent and to “confront communism” have created the conditions for the outbreak of this violence. Another person close to the heads of this violent group, the former ultra-right presidential candidate Rafael López Aliaga, known as “Porky,” now an ally of Keiko, permanently encourages violence. “Death to Castillo”, “death to communism,” “damn communists get out of here” are some of the slogans that the fascist López Aliaga raises in every public demonstration in support of Keiko.

What happened this week is the biggest outbreak of violence since the elections and the refusal of the right-wing to accept its defeat and its calls against democratic legality, but not the only one. Previously, the extremists of “The Resistance” attacked with sticks a group of Castillo sympathizers who were in a peaceful sit-in demonstration in front of the premises of the National Elections Jury (JNE), awaiting the proclamation of the president-elect. Fujimori supporters have repeatedly demonstrated in front of the homes of the JNE magistrates and the head of the National Office of Electoral Processes (ONPE) which was in charge of counting the votes, shouting threats if they did not favor Fujimori interests. In the streets, marches with fascist symbols have been seen shouting death cries against all those who are not aligned with them. These groups are small, but very aggressive.

In social media there are many racist messages against Castillo and also against his constituents, among whom the majority are the inhabitants of rural areas and popular sectors. “What has happened marks a break. We respect peaceful demonstrations, but what happened is out of line. We will not allow it,” declared President Sagasti, referring to the latest acts of violence.

On the other hand, on Saturday, July 17, thousands of people marched peacefully through the streets of Lima and other cities in support of Castillo. They demanded his early proclamation as president-elect, which had been announced for this week, but which has been delayed for a few days by recent right-wing maneuvers.