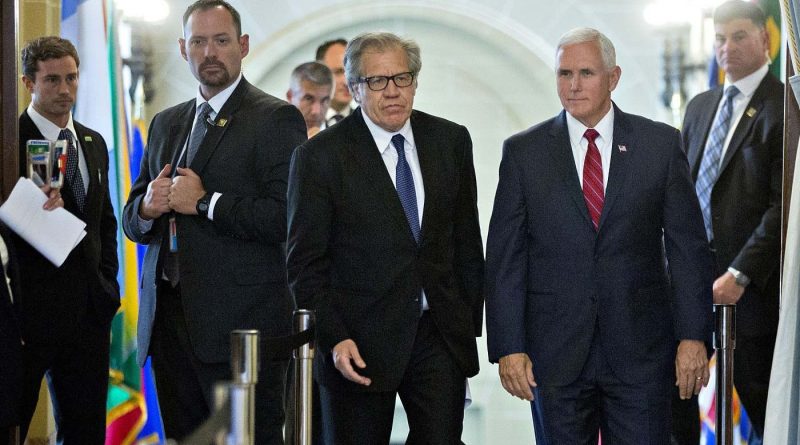 With 21 votes in favor, the Permanent Council of the Organization of American States (OAS) approved on Wednesday a resolution on the situation of human rights in Venezuela.
The resolution calls for strengthening cooperation between the Inter-American Commission on Human Rights and the Office of the United Nations High Commissioner (UN) to “monitor the situation” in Venezuela. “It also requires that an “independent, thorough and credible” investigation be undertaken to prosecute those responsible for human rights violations in the country.
“The situation in Venezuela demands a criminal investigation,” said OAS Secretary General and active leader of anti-Chavismo, Luis Almagro, referring to the purpose of the resolution passed and based on the information published in the latest report by the High Commissioner of the United Nations Organization (UN) Michelle Bachellet
This initiative was presented to the Permanent Commission by the delegations of Canada, Argentina, Brazil, Chile, Colombia, Costa Rica, Guatemala, Panama, Peru and the United States, from the Lima Group.
How was the vote?

The final result was the adoption of the resolution with 21 votes in favor, 3 against, 7 abstentions and 3 absences.

RELATED CONTENT: Bolsonaro’s Misogynistic Attack on Brigitte Macron Offers Glimpse Into Psyche of ‘Idiotic Baby Men’
During the OAS Council, Nicaragua expressed its disagreement with this resolution, which it described as “undue interference.” Saint Vincent and the Grenadines, as well as Dominica also expressed their rejection of this initiative.
The countries that voted in favor were: Jamaica, Panama, Paraguay, Peru, Dominican Republic, Saint Lucia, Argentina, Bahamas, Brazil, Canada, Chile, Colombia, Costa Rica, Ecuador, El Salvador, United States, Guatemala, Guyana, Haiti, Honduras and Venezuela.
It is important to remark that the Venezuelan government withdrew formally from the multilateral body last April after fulfilling a 2 years terms defined by the OAS charter. In a polemic move led by Luis Almagro and the USA, the participation of representatives of the US backed Guaido’s “government” was approved.
Among the nations that preferred to abstain are Saint Kitts and Nevis, Mexico, Suriname, Trinidad and Tobago, Barbados, Belize and Bolivia.
On the other hand, Antigua, Granada and Uruguay were absent.

The 6 points of the resolution
The approved document consists of 6 fundamental points:

1. To firmly condemn the grave and systematic violations of human rights in Venezuela, including the use of torture, illegal and arbitrary detentions, extrajudicial executions, forced disappearances and the denial of the most basic rights and necessities, especially those related to health, food and education.

2. To demand an independent exhaustive and credible investigation that makes it possible to bring the perpetrators and masterminds of the human rights violations to justice.

3. To reaffirm the importance of the immediate and full implementation of the recommendations contained in the report from the United Nations High Commissioner for Human Rights, including to investigate human rights violations and to halt the use of excessive force, extrajudicial executions, and torture.

4. To demand immediate and unhindered access for the Inter-American Commission on Human Rights to Venezuela.

5. To foster the strengthening of cooperation between the Inter-American Commission on Human Rights and the United Nations Office of the High Commissioner for Human Rights to monitor the human rights situation in Venezuela.

Who represents Venezuela in the OAS?
Venezuela formalized its withdrawal from the OAS on April 27, 2019. However, this body, subordinated to the designs of the United States and its allies, approved on June 26 a resolution recognizing Gustavo Tarre Briceño as “permanent representative ”of Venezuela in the body.
This Wednesday, Mexico considered that the OAS exceeded its powers by recognizing Gustavo Tarre, envoy of the self-proclaimed Juan Guaidó, as the representative of Venezuela to the OAS.

Featured image: US Vice President Mike Pence, right, and Luis Almagro, secretary general of the Organization of American States (OAS), arrive at a news conference in the Hall of the Americas at the OAS in Washington, DC, US, on Monday, May 7, 2018. /VCG Photo