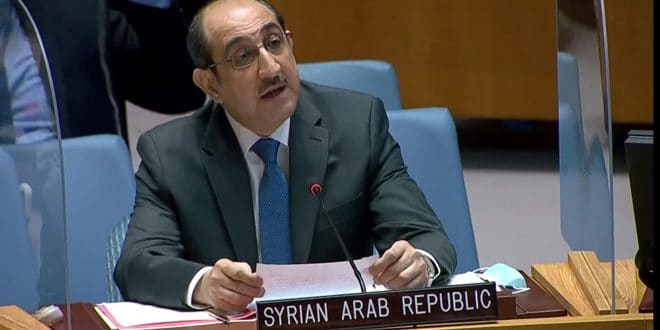 Syria’s Permanent Representative to the United Nations stressed that the US and EU illegitimate unilateral coercive measures escalated the suffering of millions of Syrians.

Ambassador Bassam Sabbagh made his remarks in a session of the Security Council on Friday on the humanitarian situation in Syria.

“The economic terrorism and the collective punishment policies represented by the illegitimate unilateral coercive measures imposed by the US and the EU have escalated the suffering of millions of Syrians who bear big burden to obtain their basic needs, in flagrant violation of all international legal standards and the principles and provisions of the Charter of the United Nations.”

He added that the catastrophic impacts of the illegitimate and inhumane embargo on Syria affected various aspects of life and limited to a great deal the ability of state institutions to provide basic services and prevented the implementation of many cooperation programs and projects between Syria and its partners in humanitarian work, such as the UN and its competent agencies, the International Committee of the Red Cross (ICRC) and dozens of foreign NGOs licensed to work in Syria, including projects approved by Resolution NO.2585.

Sabbagh pointed out to the need for the UN to play its role in putting an end to the practices of the Israeli occupation against our people in the occupied Syrian Golan, including the operations of repression, intimidation, arbitrary arrest and the seizure of lands.

He further added that Syria calls on the international organizations to condemn the occupation government step that held a meeting in the occupied Golan on the 26th of December and its announcement to establish two new settlements including thousands of units as part of its intention to double the number of settlers in the Golan.

RELATED CONTENT: Hundreds of Reconstruction Projects Carried out in Syria in 2021 Despite Difficulties and Challenges

He then reiterated Syria’s aspiration for urgent action by the Security Council to put an end to the repeated Israeli attacks on Syrian lands and implement its resolutions to ensure Israel’s withdrawal from the entire occupied Syrian Golan to the line of June 4th, 1967.