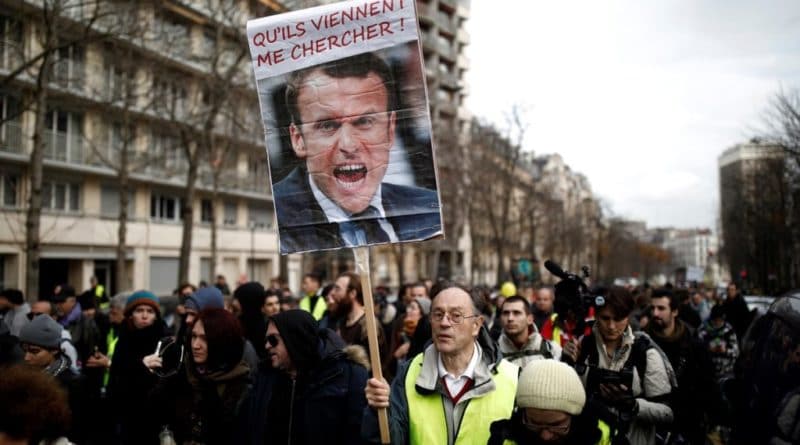 By V. Gnana and Alex Lantier

As French unions are calling to end strikes against pension cuts or delay action until a march on January 9, anger keeps building among workers at President Emmanuel Macron’s austerity policies. The strike that started on December 5 continues to shut down rail and mass transit traffic across France, and strikers are are increasingly demanding to decide their own actions independently of union bosses who negotiate with the state. The only possible progressive outcome of this confrontation between the working class and the government is for the working class to bring down Macron.

Strikers spoke to the WSWS at the “yellow vest” demonstration Saturday in Paris. Hamas, a striker affiliated to the Pabloite Solidarity union, stressed the need for workers to take the struggle out of the hands of the unions: “The rank and file, today, has realized that in fact, it has to take control of its own struggles. It has to decide on how this movement will unfold.” Those who should control the movement, he added, are “not the union bosses, who are hacks, paid 4,000 to 5,000 euros a month, who have their own offices, who are just bastards who go see Macron and shake hands with all his ministers, and have lunch and dinner with them to cut deals. They do not speak for France. They should not decide.”

RELATED CONTENT: One Year of the Yellow Vests in France

Amid a growing number of scandals over police brutality against striking firefighters and “yellow vests,” Hamas also stressed his anger at police repression of the strike against Macron.

He said, “France claims to be the land of the Rights of Man, the homeland of freedom that lectures the entire world. But today the mask has fallen, and we realize that this country represses those who dare speak out. … The police are not in the service of the citizenry, the police serve big finance. The police, which we pay for with our taxes, no longer serve the people.”

Strikers and “yellow vests” stressed their hostility to the police-state regime Macron and the banks are installing, and their attachments to the traditions of class struggle in the 20th century, from which emerged fundamental social and democratic rights that Macron is now trying to strip away.

Hamas said, “Today you see with cuts to pensions, unemployment insurance, labor laws, even the workers can no longer defend social programs created in 1945,” amid an upsurge of revolutionary struggles by the working class against the Nazi-collaborationist Vichy regime in World War II. Macron, he added, “wants to smash them. He wants to destroy them.” Céline, a “yellow vest,” told the WSWS: “I come from Poland, I came here in 1968. My parents told me about World War II, what they saw: trains for cattle, that were leaving, filled with Jews. I do not want us in France to fall back into that, I will not stand for it. Because each time in history, it starts with little things.”

Céline said she was protesting “against misery. … Nine million French people do not eat properly every day, they live under the poverty line.” She added, “Since Macron arrived, we know he wants to slash medical care, the greatest and most just of our systems. He does not need public medical care, so he plans to privatize it, so health care would be like in America: if you have money you go see the doctor, if you don’t … you can go off and die in a corner.”

After the over 10,000 arrests and 25 people that have lost eyes to rubber bullets since the beginning of the “yellow vest” movement, Céline stressed her anger at the French police state: “Police brutality is something horrific to watch. You know, I was detained for interrogation for 9 hours because I refused to take off my yellow vest. Nine hours detention on charges of insurrection? Where is society going? Also I have a friend who is even smaller than me, a rubber bullet nearly took half her face off.”

Céline spoke to the “yellow vest” protesters’ broader hostility to Interior Minister Christophe Castaner: “Mr. Castaner said ‘there are 1,500 violent demonstrators in Paris, we know where they are.’ … And each time you go to a protest march, you are searched of course. The guy in front of me had a baseball bat sticking out of his jacket, but he was not detained.” She concluded, “Now we know the ‘violent demonstrators’ are actually paid by [the state].” The cannon reads ‘Give back what you stole from the people’

Céline saw as the main sign of hope for the future the growing militancy and political awareness of workers and their mistrust of the union bosses. “The unions did not start this, it was the rank and file. That means that the people have said ‘Enough!’ That is very important because up to now, all the talks between the government and the unions took place behind closed doors. That means it was a hidden policy, we do not know what they discuss, we do not know what deals they cut.”

The way forward for strikers, “yellow vests,” youth and other forces entering into the struggle is to organize independently of the unions. There is nothing to negotiate with the government, which has insisted it will impose the pension cuts despite overwhelming popular opposition. The decisive question is to organize independently of the unions, in committees of action that can rally ever larger sections of workers in France and internationally who are showing in action that they are ready for a struggle to bring down Macron and the financial aristocracy.

RELATED CONTENT: 2019 Latin America in Review: Year of the Revolt of the Dispossessed

Despite the attempts of the unions and the government to impose a “Christmas truce” to halt the strike, protests continue to erupt on all sides.

Several musical ensembles including the Notre-Dame cathedral choir and the Opera of Paris are on strike, and the Lyon City Opera strike is getting wide attention on social media. Management tried to impose a concert on the singers on December 18 to punish them for striking the day before. The singers responded by announcing, as the curtain was lifted before a full house on December 18, that they were still on strike and would not sing any more on the 18th than they had on the 17th.

“Since December 5, millions have marched across France to demand an end of the pension cuts. The movement is not weakening; on the contrary, this week it has found a second wind,” they said to applause and catcalls from the audience. Denouncing Macron’s attacks on culture workers, they said: “Our management, by postponing a concert that was supposed to take place yesterday, is trying to prevent us from contributing visibly to this movement. … Therefore, unfortunately, we workers have decided not to perform tonight.”

Firefighters are also protesting amid mounting anger at police use of stun grenades to target firefighters who are peacefully demonstrating to defend their pensions. Even though the firefighters technically have the same paramilitary juridical status as the riot police, riot police have savagely attacked them. In October, a firefighter lost an eye to shrapnel from a stun grenade. Now, videos are circulating on social media of the December 17 march, showing police charging and assaulting peaceful firefighters and throwing stun grenades at them.