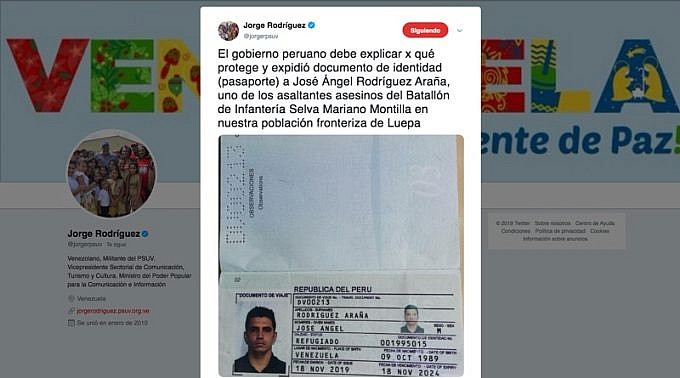 The sector vice president of Communication, Culture and Tourism, Jorge Rodríguez, urged the government of Peru to explain why it protects the identity of José Ángel Rodríguez Araña, one of those involved in the assault on the Selva Mariano Montilla Infantry Battalion, south of Venezuela.

Rodriguez made his exhortation through his Twitter account, where he also denounced the Peruvian government for protecting and issuing the passport of one of the criminals in the border battalion.

This Monday, Rodriguez revealed that the governments of Colombia, Ecuador, Peru and Brazil are following the plan to assault the border battalion by lending their territories for meetings, trainings and planning, all criminal actions.

In addition, he revealed that this action was aimed at creating a false positive that would serve as a “cause of war” for the United States government and thus justify an invasion.