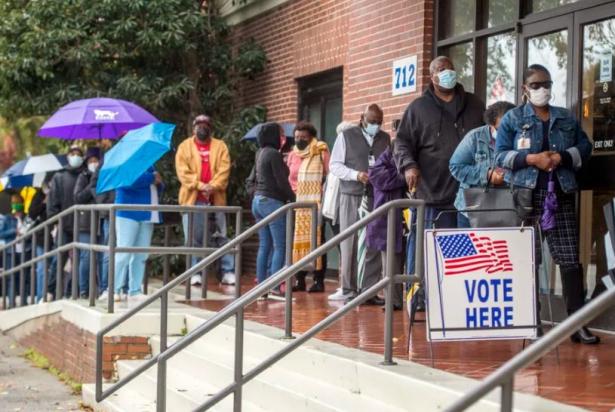 Voters purged are likely to be “young voters, voters of lower income and citizens of racial groups that have been denied their sacred right to vote in the past,” a report from the Georgia American Civil Liberties Union states.

Now that Donald Trump’s baseless lies about voter fraud have been summarily dismissed by the courts, perhaps some attention can be paid to the true threat to free and fair elections: systemic and massive voter suppression.

Voter suppression, not voter fraud, could have critically important effects in Senate runoff elections in Georgia that will determine which party controls the majority in the U.S. Senate.

In Georgia, voting rights groups, including the Rainbow Push Coalition and the Black Votes Matter Fund, have filed a lawsuit challenging the wrongful purge of nearly 200,000 voters from the voting rolls over the last two years. They are seeking, with the aid of counsel provided by the National Bar Association, injunctive relief to reinstate these voters prior to the Jan. 5 Senate runoff races.

As a September report from the Georgia American Civil Liberties Union states, the voters purged are likely to be “young voters, voters of lower income and citizens of racial groups that have been denied their sacred right to vote in the past.”

With Republicans in control of the state, it isn’t surprising that these are voters who are likely to vote overwhelmingly for Democrats. Nor is it surprising that the state chose not to use a licensee of the U.S. Postal Service — as required by law — to carry out the mailing designed to confirm that the voters were no longer at the address. Instead, it was done by a one-person firm located in Nebraska.

An independent analysis of over 300,000 voters purged from the rolls after 2018 showed that over 60% wrongfully lost their right to vote because of an incorrect assumption that they had changed their address. Too often, these voters never discover they have been purged until the time to vote, when it is too late.

The ACLU and Greg Palast, the independent investigator who discovered the wrongful purges, tried repeatedly to get the Georgia secretary of state to agree to meet to review the proof of unjustified purges. After receiving no reply, voting rights groups decided they had no choice but to file the lawsuit.

Georgia has a long history of voter suppression, dating back to the post-Civil War period when the Ku Klux Klan used widespread violence to intimidate Black and Republican voters in order to re-establish white supremacy. Georgia was one of the states that perfected Jim Crow laws to limit Black votes. Now, as Rev. William Barber II notes, “Jim Crow did not retire; he went to law school and launched a second career. Meet James Crow, Esquire.”

RELATED CONTENT: Georgia, do I Really Have to Sue you Again?

Georgia has employed all of the modern techniques of voter suppression. It has closed polling places disproportionately in areas of Black concentration, forcing voters to wait in lines for hours to cast a vote. It has repeatedly purged the voting rolls, striking far more voters off than the average state across the country. It required “exact match” voter signatures on registrations, with up to 80% of those disqualified people of color (a lawsuit brought that ploy largely to an end in 2019). When Republicans assumed total control of the state in 2010, the resulting gerrymandering was, as Rep. John Lewis stated, “an affront to the spirit and the letter of the Voting Rights Act.”

In Georgia, a hearing on the lawsuit — backed by a record of independent and authoritative expert analysis of the voters purged from the rolls — was slated for Dec. 10. Hopefully, this injustice can be corrected before the runoff in January.

Donald Trump’s false claims about voter fraud have captured the front pages and immediate attention of courts across the land. Ironically, the authoritative challenge to brazen voter suppression has received far less attention.

In Georgia and elsewhere, it will take constant attention, citizen mobilization and litigation to challenge the increasingly sophisticated efforts to suppress the vote.