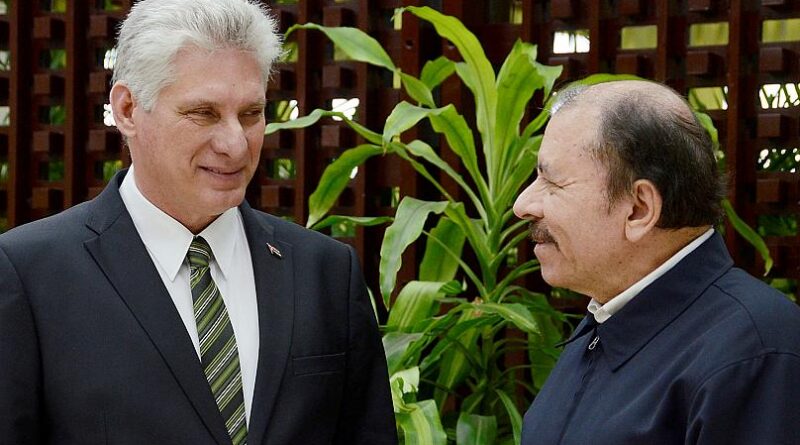 The US imposed sanctions on three Cuban entities and three Nicaraguan citizens, the US Treasury Department reported today.

The Office of Foreign Assets Control of the Treasury Department sanctioned the Cuban companies Grupo de Administración Empresarial, Financiera Cimex and Kave Coffee for their operations on the island.

The three sanctioned Nicaraguans are: Vice President of the Supreme Court of Justice of Nicaragua, Marvin Ramiro Aguilar García; Deputy of the National Assembly, Walmaro Antonio Gutiérrez Mercado; and head of the National Police in the department of León, Fidel de Jesús Domínguez Álvarez.

The first of the sanctioned Cuban companies is described by the Treasury Department as a conglomerate that includes firms dedicated to tourism, international trade, and the remittance sector of the island’s economy.

For its part, Financiera Cimex was dedicated to financial investment and also worked in the remittances business, while the third is a coffee company.

RELATED CONTENT: Traveling to Cuba in the Time of COVID-19

According to the US Treasury Department the three companies worked with a Panamanian firm that they used to “circumvent (illegal US) restrictions on international trade.”

“[President Donald] Trump’s administration remains committed to targeting the malicious behavior of the Cuban regime and its attempts to avoid US sanctions,” Mnuchin claimed, as part of a tirade against any government that doesn’t follow the US’ dictatorial rule.

Regarding the Nicaraguan citizens, the Treasury Department affirmed that the designations are an effort to target officials who continue to support the efforts of the government, headed by Daniel Ortega, and “undermine democracy” in the country.

Those designated are—allegedly—responsible for collaborating with Ortega in the “identification, intimidation and punishment of political opponents,” the Treasury reported.

“I reject the new blockade measures announced by [US Secretary of State, Mike] Pompeo. Cuba will forge ahead no matter how many entities they include on their spurious lists. Every action of the US foreign policy reinforces the isolation and international discredit to which Trump and his team led it,” wrote the Cuban Foreign Minister on his Twitter account.

According to a press release from the US government in Washington, the Office of Foreign Assets Control (OFAC) of the US Department of the Treasury added three companies of alleged Cuban military ownership to its List of Specially Designated Nationals and Blocked Persons (SDN List).

“All property and interests in the property of these entities that are in the United States, or in the possession or control of persons subject to the jurisdiction of the United States, continue to be blocked and must be reported to OFAC,” the State Department document states.

In the last three years, the administration headed by US President Donald Trump reversed the policies of rapprochement between Cuba and the US applied in 2014 during the term of former President Barack Obama (2009-2017), and intensified the application of the economic and commercial blockade against Havana, which has now lasted nearly sixty years.

According to Cuban authorities, the White House has applied nearly 200 measures and sanctions against Cuba including: entry bans on cruise ships and charter flights, sending remittances, financial persecution targeting any fuel entering the island, and an extensive “black list” that includes over 200 Cuban companies.