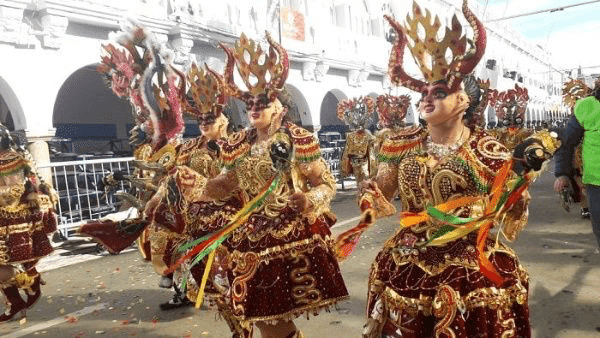 Government guarantees the Bolivian people full security during the celebration of the Oruro Carnival.

The Government of Bolivia, led by President Evo Morales, guaranteed the country security during the Oruro Carnivals. The Bolivian Government Minister, Carlos Romero, announced the deployment of a security plan that is in its full operational stage due to the the carnival parties.

Romero said that these days “new law enforcement officers are being incorporated that will allow a more effective action on the weekend at the Oruro carnival.” The official added that this security plan is designed with three objectives: “reduce violent acts , preserve public order during all activities, and neutralize any deficiency that exists during cultural events. ”

To meet this goal, Romero added that 2,225 troops were assigned to protect security, the component is composed of commandos of La Paz, Cochabamba and Potosí. In addition to the Oruro Command.” He explained that special units of Fire, Interpol, Intelligence and Anti-explosives were also deployed, as well as that there will be the activation of 261 cameras, 80 setup around the folk entrance, 40 in the outer ring and the rest in various points of the city of Oruro.

He added that there will be “air patrol”, covering all fronts in this way to avoid contingencies that may “denaturalize the joy and majesty of the entrance to the Oruro Carnival”.

The Carnival of Oruro is the maximum representation of carnivals in Bolivia, declared by UNESCO as “Masterpiece of the Oral and Intangible Heritage of Humanity” in 2008.