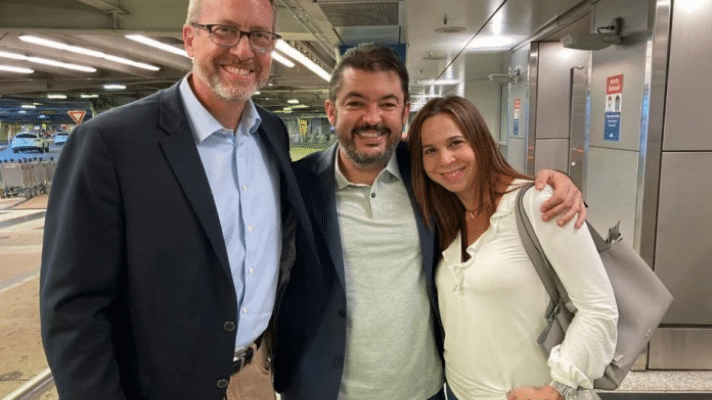 Last Wednesday October 7th Roberto Marrero, Guaidó’s former chief of staff, detained in 2019 for being involved in terrorist activities, traveled on a humanitarian flight with Venezuelan airline Conviasa, bound for Mexico, and then headed to Miami, Florida.

The information was released by US official James Story, who published some images of Marrero’s arrival at the Miami airport, claiming a supposed “victory” in which the United States government has made practically no diplomatic efforts.

In fact, Washington’s unilateral coercive measures were the ones that led to the triangulation of the trip through Mexico, because due to the “sanctions” against Conviasa, this airline is not allowed to make direct humanitarian flights to the United States.

Marrero flew on a Conviasa plane that was making a humanitarian trip to the Aztec country to repatriate 233 Mexicans and bring back Venezuelans stranded in Mexico and the US.

The YV1004 aircraft (model A340) was the one that took Marrero to Toluca, state of Mexico. This plane is one of 40 planes that were sanctioned by the Treasury Department in early February this year as part of its offensive to oust President Nicolás Maduro.

It is highly contradictory that Roberto Marrero decided to travel on a Conviasa flight, since the outgoing deputy Juan Guaidó, having promoted the US government’s blockade agenda against Venezuela, is responsible for the restrictions that the Venezuelan state airline has on its ability to respond to requests for humanitarian repatriations amid the pandemic.

In the same fashion, and understanding the bipartisan interest in Venezuela towards the presidential elections in the North of the continent, both the Democratic member of the House of Representatives of the US Congress, Eliot Engel, and the Republican senator for Florida, Rick Scott, also “celebrated” this fact.

Let us remember that in September Marrero entered the group of jailed anti-Chavez operators pardoned by the Venezuelan government as part of the effort that the latter has made to achieve national reconciliation.

According to anonymous sources cited by corporate media, the anti-Chavista politician tried to leave the country last week for Spain, within the program of humanitarian flights that the Venezuelan State has activated to attend to the repatriation of Venezuelans during the pandemic, but was removed from the plane because he wasn’t authorized to board.

Roberto Marrero is among the 110 anti-Chavista political figures who received the pardon of President Nicolás Maduro, as part of the dialogue channels established by the Bolivarian Government to advance in the consolidation of guarantees amidst the parliamentary elections scheduled for December 6, promoting the participation of all national political actors.

A bid to dismantle the supporting factors of the fake Guaidó government and the economic violence of the US blockade, at the same time it is part of the efforts to reinstitutionalize the Venezuelan parliament.

Like the rest of the pardoned opposition operators, the Venezuelan security organizations proceeded to capture Marrero for committing crimes that violated the constitutional order and promoted terrorism and violence in the country.

To be precise, Guaidó’s “right hand” was arrested by the Bolivarian Intelligence Service (SEBIN) on March 21, after it became known that he was leading a terrorist cell that had the objective of carrying out selective assassinations against the high political hierarchy of the Venezuelan government as well as attacks on public services.

When his house was searched, weapons of war and cash in foreign currency were seized.

DIPLOMATIC CHANNELS WITH THE VENEZUELAN GOVERNMENT

Spain’s El País confirmed that the government of Mexico and the high representative of Foreign Affairs of the European Union, Josep Borrell, had diplomatic talks with the legitimate authorities of Venezuela to get Marrero out of the country.

The Spanish newspaper consulted Marrero’s lawyer, Gustavo Limongi, who in an attempt to dismiss the weight of the Nicolás Maduro government in the negotiations for Marrero’s trip, said “in no case was this a negotiation.” However, he admitted that in the process “the intermediation of Michelle Bachelet has played a decisive role.”

Currently, a team of the United Nations High Commissioner for Human Rights, which recognizes the Executive of Nicolás Maduro, is working together with officials of the Venezuelan State on human rights.

In his Twitter account, Marrero thanked the AMLO government and his Foreign Minister for “their position in favor of a democratic solution, and their unconditional support that allowed me to travel via Mexico to meet my family again.”

Later, he extended his gratitude to the rest of the Mexican diplomatic team, including the chargé d’affaires of the Mexican embassy in Venezuela, Mauricio Vizcaíno, and the General Director of American Regional Organizations and Mechanisms of the Mexican Foreign Ministry, Efraín Guadarrama.

It should be taken into account that on the Venezuelan issue, Mexico has taken a position of respect for the legitimate institutions of the Maduro’s administration, dismissing the attempts to usurp power made by Guaidó’s team. In addition, the Mexican government recently voted for the approval of the resolution to strengthen the human rights work that Venezuela is carrying out with Bachelet’s office, just when the Lima Group presented another resolution to aggravate these efforts.

Featured image: Roberto Marrero received by Bogota based US fake ambassador to Venezuela, James Story, upon landing in Miami on October 8 (Photo: US Virtual Embassy)