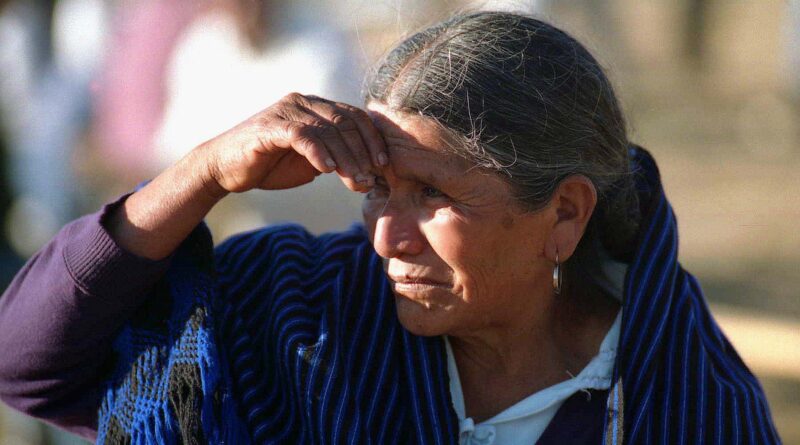 We should have a minimum of shame, since we have no courage. A minimum of indignation that takes us out of the social media networks that put up with everything, and takes us into the streets that are witnesses of the country’s history. The convenience of a social media network is beautiful, but that is just make-up, a varnish, verbiage, oratory; it does not bring about root changes and Guatemala is a rotting country.  It is the responsibility of the same mestizo and urban society, incapable of uniting with the native peoples in their enormous dignity and strength of struggle, who have the courage to present themselves wherever they have to, on whatever day it may be, constantly fighting to rescue the country from the hands of the criminal cliques that have taken over the state since the post-dictatorship.

Guatemala has been in decline since the dictatorship. And the passive and insensitive society is the avalanche that undermines all hope for the reconstruction not only of the social fabric, but also of the governmental structures that have served in the meantime as the enormous tentacles which these mafias have used to grab not only money, but also material resources, to deny any opportunity for development to a people who are on their knees in the face of fear. But more than fear, it is indifference. Indifference is more powerful than fear. Fear makes people react in time, indifference devastates.

We are accustomed to horror in times of democracy—a disguised democracy, of course because Guatemala is living a renewed version of the dictatorship of past decades. The difference is that before, people reacted, but today their outcry is only on social media. Only the native peoples have the guts to go on general strike indefinitely—those who have been the hardest hit, those who have always been humiliated by the government in power and by the racist and classist mestizo society, which struts around with dignity on social media networks and in its myriad of labels. However, this society is light years away from coming even close to the human greatness of the native peoples.

Horror as a mechanism of government imposition has so far not touched our deepest fibers, and the truth is that I don’t think we have any, just as we have no guts, we have no respect for children and even less love. Without respect and love, we don’t care what happens to children, as long as they are not our children. We don’t give a damn what happens to teenage girls, as long as they are not our family. Let them rape and kill as many women as they want, as long as they are not in our family circle. Poor things, but it doesn’t go beyond the pity we feel, and that pity with half-hearted indignation is only enough for a social media rant. Because it’s a shame not to say anything either.

RELATED CONTENT: Guatemala: Why Do Social Protests Culminate in a Blind Spot?

The horror should not be the rape and murder of a young girl; the femicide of dozens of women. The horror in a conscious society, with two fingers on the pulse, and a minimum of dignity should be that parks are not watered at least three times a week. That should be the horror, those should be the limits. But starting with the fact that we don’t even have parks, we have been denied the right to outdoor recreation in areas suitable for nurturing the integral development of children.  They have denied us the right to a health system, to an education system, to food, to recreation, they have denied us the right to freedom of mobility, and they are about to deny us freedom of thought. We have exceeded all the limits that should have outraged us at the time. The rivers have dried up, the great forests have been cut down, today it is ecocides that speak to us, and the mining companies are taking the minerals to other countries.  The beginning of that must have been the horror, and that is when we should have reacted. But since the indigenous communities lived there, not us, they could do whatever they wanted to them and we were happy with the shopping centers. We have allowed criminals from their remote-controlled oligarchic comfort to use the state to degrade us.

They have been measuring our water, how high our pressure is, what we are capable of being indignant about. We have served them as an experiment all these years. And since racism and classism, laziness and insensitivity are superior to any thought of unity and guts, then they swing us backwards and forwards. They didn’t even enter our houses by breaking down the doors, as in past decades during the dictatorship, today we leave them open for them to come in, take what they want, and do with us what they want because we lost all capacity to react. We are a dead country.

But there is still more to come, the horror is just beginning. Let’s continue passive, indifferent, throwing puffs on the social media networks. Guatemala needs real guts and only the native peoples have those. Those who have always put their chests out and fought with their heads held high, for thousands of years. The rest is bagasse, no matter how many university degrees are pasted on the wall or, as is the fashion, posted on social media networks. We are, unfortunately, the mestizo society of the great social media network revolutions, that is to say: just the simple noise of a carnival.