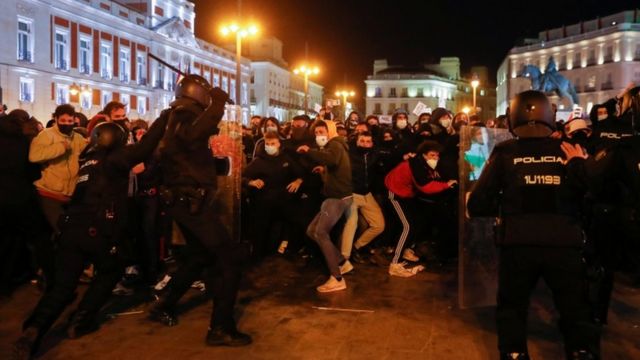 Spain burned again on the fourth day of protests following the arrest and imprisonment of anti-monarchist rapper Pablo Hasél.

In Spain, four consecutive night of protests have resulted from the imprisonment of Pablo Hasél. The rap artist was detained and led to jail on Tuesday for alleged crimes of glorification of terrorism and insulting the crown. Barcelona was once again the epicenter of protests demanding the release of the rapper amid resounding international condemnation for what is considered a contravention of freedom of speech.

Using tear gas, the police tried to disperse protesters who were throwing stones and burning garbage disposal containers. In addition to the liberation of Hasél, protestors’ slogans also demanded the end of the monarchy and the independence of Catalonia.

The events have generated a strong debate about freedom of expression in Spain. Amnesty International (AI) condemned the arrest of the 32-year-old rapper and the limiting of freedom of speech in the Iberian country.

The scandal has also caused disagreements in the Spanish Government. The Podemos party, part of the ruling coalition, rejects the police repression and supports the protesters. On the other hand, the Prime Minister Pedro Sánchez advocates for freedom of expression but calls for forceful action against violent protesters.

However Hasél’s case ends, the political figures emerging most harmed will be those of the royal family, whose faltering image has also been damaged by corruption scandals. According to studies, more than half of Spaniards consider it necessary to hold a referendum regarding the Head of State.

Featured image: Excessive use of force by the police has ignited violence in protests demanding Pablo Hasél’s release. Photo courtesy of Getty Images.