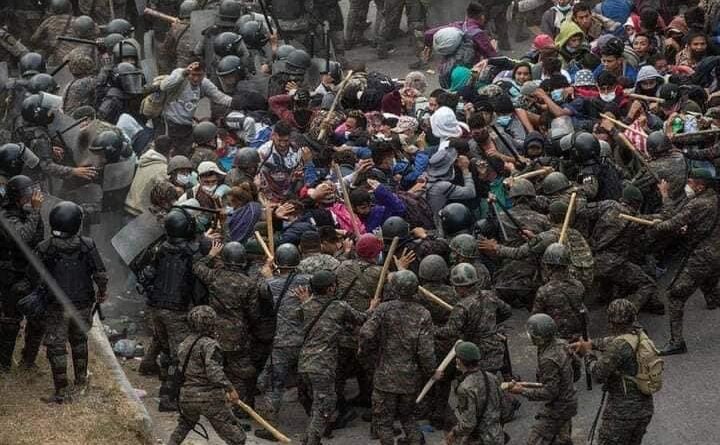 On Saturday, January 16, Guatemalan soldiers blocked and violently repressed the advance of part of a caravan of about 9,000 Honduran migrants at a point near the place where they entered the country in their attempt to reach the United States border, according to AP.

The soldiers, many armed with helmets, shields and clubs, formed a barrier on a highway in Chiquimula, near the border with Honduras, to block the march of the migrants and heavily repressed those that tried to peacefully bypass the barrier.

The government of Guatemalan President Alejandro Giammattei informed in a statement on Saturday that it had asked the Honduran authorities to “contain the massive departure of its inhabitants.” On Friday, January 15, the migrants entered Guatemala after passing about 2,000 police and soldiers at the border. Authorities complained that many entered without showing their negative coronavirus test, as required by the country.

Guatemala has installed nearly a dozen roadblocks and could begin to return more migrants to Honduras, as it has done before, arguing that they and others are endangered by large groups of people traveling during the coronavirus pandemic while many analyst agree that the only reason for the repression is to comply with US orders.

Mexico has continued to post thousands of National Guard members and immigration agents on its southern border, in a show of force aimed at discouraging the caravan from entering.

Mainstream media covered the incident as if it were a friendly family reunion where repressive military forces forbid in a friendly manner the passage of the caravan, and they used all possible euphemisms to present the incident like just a small skirmish when in reality video footage and photos show a heavy and disproportionate use of force against migrants who most of the times travel with young children in very vurnerable conditions.

On Friday night, two groups of more than 3,000 Honduran migrants each entered Guatemala without registering. These groups are part of a larger caravan that had departed before dawn from the Honduran city of San Pedro Sula. A third group entered Guatemala on Saturday.

Honduran migrants attempt to cross Guatemala to reach Mexico, driven by poverty and the hope of a warmer reception in the United States if they reach the US border. However, several previous attempts to form caravans were thwarted in Mexico, Guatemala, and Honduras.

On Friday around 4:00 a.m., young men and entire families carrying sleeping children set off. Some quickly got finger trips while others walked down the road under police escort.

Mainor García, a 19-year-old day laborer from San Pedro Sula, was walking down the road with a purple backpack on Friday morning. He said that he was afraid of the journey, but that he was willing to take the risk. Hurricanes “Eta and Iota destroyed all of our houses,” he said.

Another migrant, Óscar Zaldívar, 25, who worked as a driver in the town of Cofradía, said he had no choice but to abandon his country.

“There is no other option. We have to get out of here, out of this country because here we are going to die the same way,” he said refering to COVID-19 and the high toll in lives it has taken in Central American countries.

The International Committee of the Red Cross said in a statement on Friday that “the combination of COVID-19, social exclusion, violence and climate-related disasters occurring concurrently with a magnitude rarely seen in Central America pose new humanitarian challenges.”

On Thursday, Mexican authorities infomed that they had discussed migration with Jake Sullivan, whom US President-elect Joe Biden appointed as national security adviser, and raised “the possibility of implementing an emerging development cooperation program in northern Central America and southern Mexico, in response to the economic crisis caused by the pandemic and the recent hurricanes that affected the region.”