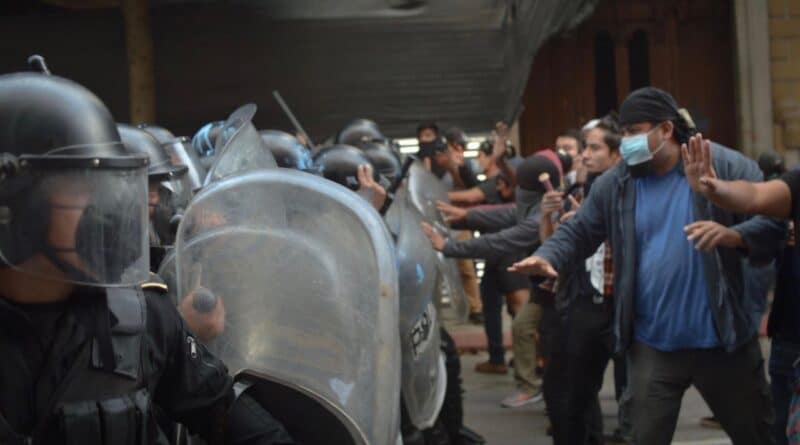 On the eve of initiating national celebrations for its bicentennial, Guatemala is once again in the international news as a result of recent social protests against the approval of the State budget for 2021.

What forced Guatemalans to take to the streets again?

The Congress of the Republic, without further debate, approved the general budget of the nation for 2021. The highest budget in all Republican history, more than 60% of which was destined for current spending. It suppressed the financing for the social program “Zero Hunger” and increased the already millionaire budget for deputies, construction companies, etc.

Hurricanes Eta and Iota, added to the COVID19 pandemic, caused too many economic losses in wide sectors of the country. During the pandemic, the current government indebted the country without greater control or social resistance. And yet the nation’s budget for 2021 was based on increased public debt. At the moment, each Guatemalan is born with a public debt equivalent to $1,000, and the 2021 budget increased that debt to $1,300 per capita.

The social protests are also an expression of the impotence that Guatemalans suffer in the face of the “shameless” management of the State and public goods by the rulers of a country with more than 60% of its population living in poverty, and the same number of children suffering from malnutrition. These are the best paid rulers and deputies in the region and in a good part of the continent!

Who are the social actors that protest and what do they demand?

Similar to the year 2015, although with less attendance, are young university students, urban neighbors, NGOs, civil associations, among others, who took to the streets in the capital city of Guatemala and in other cities. The business media, together with the alternative media, contributed to the calls, although not to the same extent as in 2015.

They demanded the reconsideration of the 2021 budget and the resignation of President Alejandro Giammattei.

Unlike the social protests of 2015, which ended with the dismissal and resignation of former President Otto Pérez and former Vice President Roxana Baldeti (both currently imprisoned without sentence), this time the U.S. Embassy kept a low profile. The country’s business elite expressed their protest against the approved budget… As did the religious hierarchies…

The indigenous and peasant sectors united in the sociopolitical movement CODECA did not join the recent social demonstrations because they consider that the “weekend” protests will not resolve the structural ills of the country, although formally they did condemn the shameful role of the Congress of the Republic and the central government.

The CODECA movement, since 2012, has been promoting and proposing the process of a Popular and Plurinational Constituent Assembly to agree on new rules for socio-political coexistence in the country, and a new constitutional framework to build the Plurinational State.

Why do these social protests culminate in a blind spot?

In 2015, the US government, through its Embassy in Guatemala, and using the narrative of the “fight against corruption” undertaken by the International Commission against Impunity in Guatemala (CICIG), called crowds of Guatemalans in the plazas and streets to remove and punish the corrupt ruler who was also not to the liking of the US government. And so, it happened…

Simultaneously, with the banner of the struggle “anti-corruption made in the USA”, progressive governments were criminalized in Brazil, Ecuador, Bolivia… Once Dilma Rousseff was dismissed, and Lula in Brazil and Correa in Ecuador were politically disqualified, CICIG was dismantled by the shameless government of Jimmy Morales, protected by the government of Donald Trump.

The recall protests of 2015 were also aimed at deactivating/invisiting the constituent proposals of social movements such as CODECA that were proposing structural changes for Guatemala.

In 2015, the bustle of the plazas had as its maximum political horizon the change of government, in spite of the fact that pro-constituent social movements warned that the crisis of the State would be resolved with a plurinational constituent process, and not merely with a change of government… Five years later, it is confirmed that medicine was worse than the disease. The neoliberal system is more vigorous and more corrupt…

It is now 2020, and again the same actions in the squares, with the same story of: “Renounce now”… Unlike 2015, now, the State represses demonstrators… rehearsing its terror tactics of yesteryear.

Why do we not finally make the leap to the Popular and Plurinational Constituent process to implement structural changes in the country?

The traditional political and social left in the country argue that there is no “necessary correlation of forces” for this. Are they afraid of the uncertainties? Do they fear the political and intellectual “defeat” bequeathed to them by the Peace Accords (1996)? Are they comfortable? Who knows?

The CODECA movement and its political organization, the Movement for the Liberation of the Peoples, do not feel so safe or capable of sufficiently shaking up, in the streets, the corroded state system that is falling to pieces. To some extent, this socio-political movement (CODECA-MLP) has been behaving too well with this delegitimized government and state, now even in the urban niches.

Perhaps the lethargic sociopolitical uncertainty caused by the power elites in Guatemala will be maintained thanks to the “political and intellectual selfdefeat” that prevents the traditional leftists from taking action and to the political “prudence” of CODECA-MLP that is waiting for the 2023 electoral calendar (general elections) performing “imperceptible” organizational work in the communities.