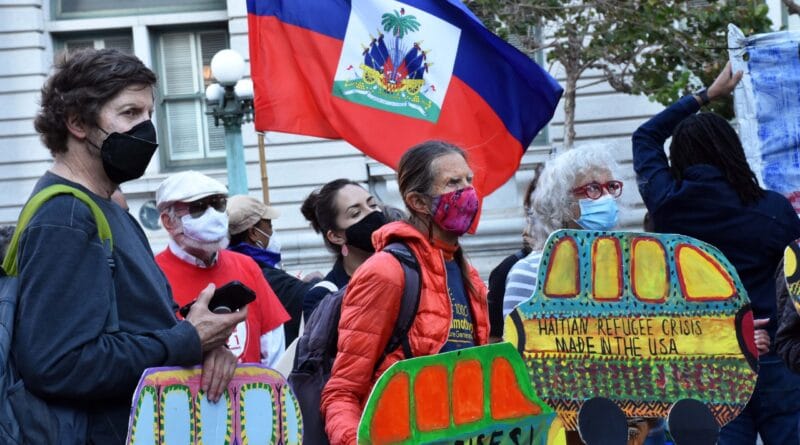 I have fresh in my mind those images of those guards on horseback chasing Haitians with whips at the southern border of the United States just like in the days of slavery. The pictures taken on September 21 scream from the shadows of that country’s racist past that still remains today.

The crisis occurred when hundreds of Haitian migrants were trying to cross the border from Ciudad Acuña, in Mexico, to a camp set up under a bridge in the town of Del Rio, Texas. They just wanted to buy food and water, which are basic goods they could not find on the US side.

In that camp, over 12,000 migrants, the great majority Haitians, were waiting for political asylum in the United States to escape from their country’s violence and extreme poverty. Instead of taking into account the unfolding tragedy there, the Biden Administration quickly implemented Title 42 of the United States code that allows immediate expulsion for anyone trying to get into the US who has recently been in a country where a communicable disease was present. In view of COVID, this would mean just about anywhere, but the White House’s decision can only be viewed as one that is an overtly racist move.

Thrust into planes, the images of people arriving back in the Haitian capital, Port-au-Prince on September 22, were just as painful as the ones taken by photojournalists at the southern border of the United States. Many people can be seen desperately running to get their belongings, which were left on the landing strip without any identification following their deportation from the US. While another group of migrants desperatley tried to re-enter the planes in which they had arrived, the rest of the people threw shoes and objects at the aircraft.

RELATED CONTENT: The Resignation of Biden’s Special Envoy to Haiti Once Again Exposes the White Supremacist Foundations of US Foreign Policy, No Matter Which Party is in Charge (Statement)

“They are only deporting Haitians. People of other nationalities were left in the camp. That is discrimination,” deportee Yranese Melidor told the local press in Port-au-Prince on September 22.

“The US government has no conscience. This hatred against us proves they don’t like us just for the color of our skin,” said Haitian Maxon Prudhomme.

But Haiti’s pain seems imperceptible to the international gaze. Today, not only the US is closing its doors to undocumented immigrants from this Caribbean nation, which faces a constant humanitarian crisis, aggravated by the assassination of President Jovenel Moïse and the recent earthquake, two events that shook the country with equal intensity last August.

The alarming situation faced by Haitians in Texas is only a small part of the reality they are facing on other borders of the continent.

The Colombian Ombudsman’s Office reported, for example, that there are some 19,000 undocumented migrants (a record number) stranded in the Necoclí city, from where they are waiting for a turn to cross into Panama for the trek north, with the distinct possibility of another tragic showdown like the one we just saw play out at the Rio Grande River.

Most of them come from the island of Hispaniola. They make their way north from Central America, through the jungles and swamps of the Darien Gap in Colombia and Panama to the Mexican-Guatemalan border, where they have faced brutal mistreatment, including rapes, robberies, murders and deaths.

“Migrants are victims. Instead of re-victimizing, punishing, persecuting, expelling and deporting them, we have to look for mechanisms to protect and receive them,” urged Professor María Teresa Palacios Sanabria, director of the Human Rights Research Program of the Universidad del Rosario, in Bogota.

“This migration has been motivated by the exclusion, discrimination, lack of opportunities, and poverty they experience in their country,” she added.

The region is sitting on top of an immigration time bomb. Haiti, the poorest country in Latin America, has been living through decades of one crisis after another, of power struggles, of diseases growing as fast as criminal gangs, of arbitrary school closures, of children growing up amidst violence, bullets, and food insecurity.

They are alone in a world that does not want them for one reason, as Uruguayan writer Eduardo Galeano would say: “The history of harassment against Haiti, which in our days has tragic dimensions, is also a page of the history of racism ingrained in Western civilization.”