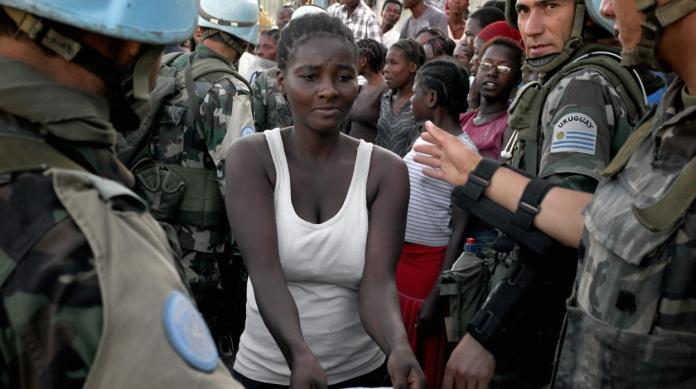 In the midst of strong allegations over the possible involvement of the governments of Colombia and the United States in the assassination of the President of Haiti, Jovenel Moïse, on July 7, Colombian President Iván Duque announced a $1 million donation to the Pan American Health Organization (PAHO)in order to strengthen its COVID-19 vaccination campaigns amongst the member states of the Caribbean Community, CARICOM.

So far, Haiti is the only country in Latin America, and one of the five in the world, that has not yet administered a single dose of a COVID-19 vaccine. However, after the assassination of Moïse, the United States has provided resources and vaccines to promote “stability in Haiti,” and without ruling out sending US troops there, it has, nonetheless, reinforced its Navy presence in its Embassy. Are these the first steps towards a new “humanitarian occupation” of Haiti?

Help or intervention?
According to Haitian authorities, at least 20 Colombian mercenaries participated in the assassination of President Jovenel Moïse. Some US versions of the events claim that it was an “arrest operation” aimed at detaining President Moïse and handing him over to the US Drug Enforcement Administration (DEA). The US State Department has admitted that seven of the mercenaries involved were former members of the Colombian military who had received some type US funded training.

Jorge Rodríguez, president of the National Assembly of Venezuela, has denounced an existing relationship between President Duque and Venezuelan businessman and Guaidó team member, Antonio “Tony” Itriago. Itriago is in charge of the US based company CTU xq Security LLC which hired the Colombian mercenaries that took part in Moïse assassination. The company had also participated in an assassination attempt against Venezuelan President Nicolás Maduro in 2019.

From the statements of the detainees in Haiti, it has been determined that the aim of the assassination was to install a regime that would allow greater US presence in Haiti. Since the time of the occupation of Haiti by the United Nations Peace Corps, Haitian people have been clamoring for complete witdrawal of US and UN missions and respect for Haiti’s sovereignty and right to self-determination. It seems that Moïse was also in favor of having a national army instead. Although international troops have “withdrawn” from the country, they maintain a presence though associated missions there.

Unfortunately, Haiti has been a clear example of what the so-called “humanitarian invasions” truly represent. After the 2010 earthquake, which affected more than a million people, Haiti received more than $9,000 million for reconstruction. These resources were administered by NGOs that were specifically established for this purpose. There were so many of them that Haiti became known as “the republic of NGOs.” Ultimately, the resources did not reach the people of Haiti, and, until today, Haiti is experiencing the consequences of destroyed public services and extreme poverty.

With “humanitarian aid” came the humanitarian occupation. A week after the earthquake, the United Nations approved the initial shipment of 3,500 peacekeepers, the MINUSTAH. Back then, these UN troops were denounced for their repression of the Haitian people and for rapes of minor girls and women in whcih they were involved. MINUSTAH staff was later found to be responsible for the cholera outbreak that killed more than 10,000 Haitians in three months.

Now, the sudden announcement of aid to Haiti by the Colombian government is a cause for suspicion. Colombia is the main US political operator in the region and without a doubt a military interlocutor in defense of US interests. The supposed solidarity gesture comes about in the midst of a wave of anti-Duque protests in Colombia and accusations of crimes against humanity, and of no less than 55 massacres.

The United States has also offered to give resources for the so-called stabilization of Haiti. The interim authorities of Haiti have requested the presence of US troops to guarantee the security of basic and strategic infrastructure of the country. The Joe Biden government has declared that, for now, it will not send troops, but will redouble its Navy presence in its Embassy in Haiti.

Amid social and political upheaval in Haiti, the US government has delivered 500,000 Moderna vaccine doses and promised new donations. This seems like a measure to quell tensions and the possible growth of a progressive movement in Haiti, a country Trump had previously referred to as a “shithole country” during debates on immigration.

Venezuela considers that there is a participation of the Colombian government, an unconditional Washington ally, in the Moïse assassination in Haiti, through contracts with companies related to Juan Guaidó’s group. Itriago’s company was the co-organizer, together with Iván Duque’s government, of the Cúcuta concert, Venezuela Aid Live 2019. This music event was the front for trying to smuggle weapons in trucks, under the guise of humanitarian aid, into Venezuela.

Rodríguez alerted that paramilitaries currently occupy 67% of the Colombian territory, and emphasized that Colombia is now a new School of the Americas, where private companies hire murderous mercenaries to fight and kill for money.

This would not be the first time that the administration in Washington has occupied Haiti in defense of its own interests and those of the corporations that own almost all of Haiti’s land, and which for years was treated as its private granary. The humanitarian aid narrative has already proven its usefulness in justifying interventions in the region.

Featured image: Haiti in the crosshairs of a “humanitarian occupation.” File photo.