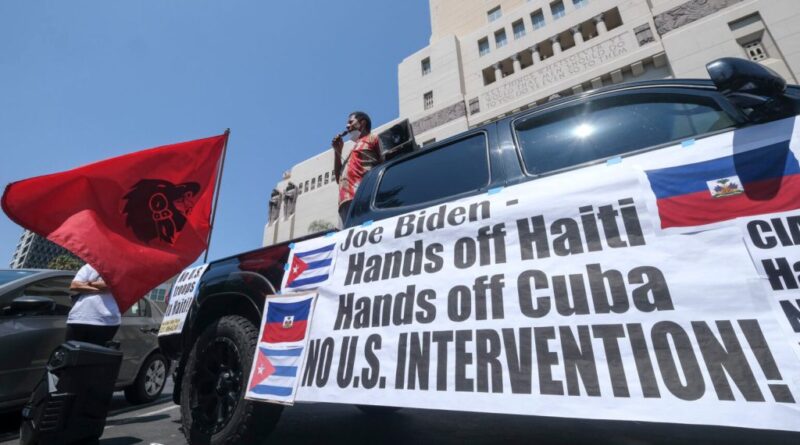 The Haitian and Cuban revolutions are two of the greatest events in world history. Both social upheavals inspired oppressed peoples and terrified their oppressors.

The Haitian Revolution was the only successful slave revolution in history. Every slave master from Texas to Maryland feared enslaved Africans rising up and breaking their chains, like they did in Haiti.

Haiti gave crucial aid to the liberator Simón Bolívar, who defeated Spanish colonialism in much of South America.

Since 1959, Wall Street’s nightmare has been all of Latin America becoming “another Cuba.” Two thousand Cuban soldiers died fighting alongside their African comrades in defeating the Nazi armies of apartheid South Africa.

The initial assistance to newly independent Angola was called “Operation Carlota.” It was named after an enslaved African woman who led a Cuban revolt against Spanish colonial rule. After being captured she was torn apart by horses.

Less than two years after the apartheid invaders were finally defeated at the battle of Cuito Cuanavale in southern Angola, Nelson Mandela walked out of prison on Feb. 11, 1990.

Cuba and Haiti are neighbors. The distance between them is less than a hundred miles across the Caribbean Windward Passage.

While the Haitian Revolution began in 1791, the Cuban revolutionaries entered Havana in 1959. This historical distance of more than 160 years explains their different outcomes.

No French Revolution without Haiti
The French Revolution was a capitalist revolution. But it was poor people in both France and Haiti who pushed it forward. The storming of the Bastille prison in Paris on July 14, 1789, has never been forgotten.

Over two million poor people are jailed in US Bastilles. These need to be torn down and the prisoners reunited with their families.

In the late 1700s, Haiti was the richest colony in the world. While today Big Oil calls the shots in the United States, it was sugar along with stealing and selling Africans that was central to the rise of European capitalism. Africans were their capital.

It was the profits from their sugar plantations in Haiti, Guadeloupe and Martinique that emboldened French capitalists to challenge King Louis and the rest of the feudal aristocracy. “Nearly all the industries which developed in France during the eighteenth century had their origin in goods or commodities destined either for the coast of Guinea or for America,” wrote C.L.R. James in “The Black Jacobins.”

Over 60 percent of French overseas trade was with Haiti. Its maritime trade with Haiti employed 24,000 French sailors on 750 ships.

French shipowners and other capitalists grew rich by working Africans to death. The average life expectancy of Africans in Haiti was just 21 years.

These conditions led to Dutty Boukman starting a revolt in August 1791 that burned 1,800 plantations.

Haiti helped shield the French Revolution from foreign invasion. Haitians defeated a British army trying to conquer Haiti. Because the redcoats were being vanquished in Haiti, they couldn’t march on Paris.

The French revolutionaries abolished slavery on Feb 4, 1794. This act simply confirmed what Haitian people had already won on the ground under the leadership of Toussaint Louverture.

It also reflected the feelings of the French poor. They hated the “aristocracy of the skin,” the white slave masters who worked Black people to death. Peasants and other French working people boycotted coffee because it was grown by enslaved Africans.

But beginning in July 1794, the French Revolution was thrown back. Its leaders were sent to the guillotine.

Napoleon kidnapped Toussaint Louverture and let him die in a cold prison cell. The French dictator sent an army to try to restore slavery in Haiti. It was defeated with 24,000 out of 34,000 soldiers having perished.

Haiti against the capitalist world
Jean-Jacques Dessalines declared Haiti’s independence on Jan. 1, 1804. But the world capitalist class never forgave Haiti for its revolution. The two centuries of revenge that followed made Haiti poor.

The United States refused to recognize Haiti until after the US Civil War had started, in 1862. The restored Bourbon monarchy in France agreed to diplomatic relations and trade with Haiti in 1825.

The French government did so on the condition that Haiti pay reparations to the defeated slave masters! The last payment on this reverse blood transfusion wasn’t made until 1947.

In order to pay off this blood money, Haitians were forced to chop down trees. Floods resulted from the hills becoming bare.

The United States has continuously intervened in Haiti for more than a century. U.S. Marines invaded the country in 1915 and stayed there until 1934.

A half-million dollars of gold was stolen from Haiti’s central bank by US soldiers and given to New York’s National City Bank, now named CitiBank. A US marine was given the medal of honor for assassinating Haitian resistance leader Charlemagne Péralte.

It was the CIA that helped prop up the dictatorships of “Papa Doc” François Duvalier and his son “Baby Doc” from 1957 to 1986.

Haiti’s revolution occurred as capitalism was on the rise. British textile factories, which were the starting point of the industrial revolution, depended on cotton grown by enslaved Africans in the US.

By the 1840’s, British capitalists invaded China to sell opium. The 1884-85 Berlin conference of European colonialists carved up Africa. Belgian King Leopold killed between 8 and 15 million Africans in Congo for rubber profits.

Black people in the United States played a crucial role in defeating the slave owners’ confederacy in the Civil War. After a brief springtime of freedom, Black people were pushed back by Ku Klux Klan terror that overthrew the Reconstruction governments. Haiti was all alone.

Socialist solidarity with Cuba
In contrast, when the Cuban Revolution triumphed on Jan 1, 1959—155 years after Haiti declared its independence—there was a constellation of socialist countries that embraced it. The Cuban Revolution came four decades after the 1917 Bolshevik Revolution.

That doesn’t mean the Cuban people had it easy. Over 3,000 Cubans were killed by terrorist attacks instigated by the CIA.

George Herbert Walker Bush was CIA director when 73 people were murdered on Cubana de Aviación Flight 455. They were killed on Oct. 6, 1976, by a bomb placed by Bush’s pal Luis Posada Carriles. It was revenge for Cuba helping to fight apartheid South Africa and the CIA in Angola.

For 60 years the US has enforced an economic blockade that tries to strangle Cuba. It has cost the country at least $144 billion or $13,000 per person.

The banksters were furious that the Cuban people took back their sugar mills, railroads and electric utilities from US financiers. Of the $12 billion in US foreign investments from Latin America in 1959, $2 billion were in Cuba. That’s worth nine times as much in today’s money.

As Fidel Castro said after the CIA’s attempted invasion at Playa Giron (Bay of Pigs): “This is what they cannot forgive: the fact that we are here right under their very noses. And that we have carried out a socialist revolution right under the nose of the United States!”

After 80 percent of Cuban doctors left the country, the socialist republic of Czechoslovakia helped train a new generation of physicians for Cuba.

The thousands of Cuban doctors who save lives around the world are also a legacy of the labor donated by Slovak, Czech, Hungarian and Roma workers. So are the 300,000 people in Central American who had their sight saved or restored by Cuban health workers in “Operation Miracle.”

The Soviet Union went to the brink of nuclear war in October 1962 to defend Cuba during the “missile crisis.” Vital economic assistance was given by the socialist countries of Eastern Europe and the Soviet Union.

Just the fact that these socialist countries conducted fair and equitable trade with Cuba served as a counterweight to the US economic blockade.

RELATED CONTENT: The Defense of the Cuban Revolution is a Struggle Against Fascism

Cuba’s solidarity with the world
It’s been 30 years since the Soviet Union and the socialist countries of Eastern Europe were overthrown. This immense tragedy is a greater defeat than Reconstruction’s overthrow in the US and more dangerous than Hitler’s crushing of the German working class.

Cuba lost two-thirds of its trade. So how has Cuba survived?

Fidel Castro told the Cuban people that an economic storm had arrived. The historical leader of the Cuban Revolution called it a “special period.”

The Cuban people endured shortages, but because of socialist economic planning not a single school or hospital was closed. Funding was continued on medical research.

While there are 111,000 homeless school children in New York City—the capital of capitalism—there are no homeless children in Cuba.

The Cuban people have never forgotten the aid given to their revolution by the Soviet people. Thousands of Ukrainian children who were victims of the Chernobyl nuclear disaster have been treated free of charge in Cuban hospitals.

Towards the end of the initial special period in 1999, Cuba opened the Latin American School of Medicine. Tens of thousands of doctors from around the world have been trained there for free.

Among them are hundreds of doctors who are helping poor people in the United States. The Cuban people are continuing this aid despite new economic sanctions imposed by Trump and continued by Biden.

The courage of Cuba and Haiti
The Cuban Revolution is the continuation of centuries of struggle. Cuba’s economy, like Haiti’s, was based on sugar. Revolts of enslaved Africans broke out, including the 1825 uprising in Matanzas and Carlota’s rebellion in 1844.

Hundreds of thousands of Cubans died during two liberation wars from 1868 to 1878 and 1895 to 1898. It was only because of these sacrifices that Spain was forced to abolish slavery in 1886.

Just on the brink of Cuba’s victory, the US declared war on Spain. Wall Street turned Cuba into a virtual colony.

The US Navy seized part of Guantánamo. Hundreds of detainees have been tortured there since 2001 while the US State Department and corporate media claim the Cuban government violates human rights.

Twenty thousand Cubans were murdered by the US-backed dictator Fulgencio Batista in the 1950s. Cuban revolutionaries, led by Fidel Castro, overthrew Batista in a guerrilla war.

The Cuban Revolution has been able to march forward since 1959 despite being just 90 miles from the United States. The first reason is the courage of the Cuban people and the leadership of Cuba’s Communist Party.

Cuba was also helped by the rising struggles of Black people in the United States. Even the Pentagon brass worried that if they invaded Cuba, Black troops might rebel.

The solidarity of socialist Cuba includes giving asylum to Assata Shakur and many other Black revolutionaries. Malcolm X met with Fidel Castro in 1960 at the Hotel Theresa in Harlem.

Haiti deserves reparations and a new revolution. Both Haiti and Cuba have done so much for workers and oppressed peoples around the world.

US hands off Haiti and Cuba!