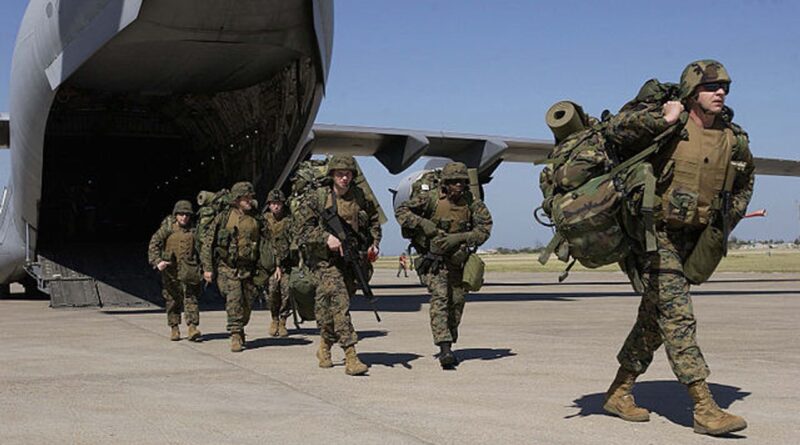 The Washington Post, a newspaper wholly owned by multi-billionaire Jeff Bezos, has begun a steady drumbeat for yet another US military intervention in the Caribbean island nation of Haiti on the pretext of rescuing its impoverished population from “anarchy” following the July 7 assassination of autocratic president, Jovenel Moïse.

“There is no way for Haiti to pull itself out of the current morass without elections that would certify and legitimize a new government and legislature,” the editorial continues. “That requires at least a short-term international intervention.”

The paper notes that the Biden administration is pressing for elections scheduled for September to go forward and that the country’s new prime minister, Ariel Henry, a longtime stooge of Washington who was installed on July 20 as a result of a direct intervention by the State Department, has pledged to deliver.

For an election to go forward, the Post editorial concludes, “Boots on the ground” will be necessary.

This hackneyed phrase, “boots on the ground” has a long and ugly record, which in the context of Haiti’s history smacks of a criminal drive to revive colonialism.

Haiti had American “boots on the ground” for three decades following the last assassination of a Haitian president, Jean Vilbrun Guillaume, who was killed by his political opponents in 1915. Then US President Woodrow Wilson sent in the Marines on precisely the same pretext that their presence was required to suppress “anarchy.” The real US motives were to thwart German influence in the country and ensure that its cheap labor and raw materials were placed at the disposal of US companies for exploitation.

The Marines seized Haiti’s treasury and customs house, while occupying the country’s parliament to ensure that a US-selected candidate was installed as president. Washington also forced through changes in the Haitian constitution, including a provision allowing foreigners to own land for the first time since the Haitian revolution’s final victory in 1804.

The US occupiers ended up killing an estimated 15,000 Haitians, while the Marines suffered just 16 fatalities.

Their one-sided war against the cacos, a peasant-based nationalist rebel movement led by former Haitian army officer Charlemagne Peralte, employed all of the bloody methods of counter-insurgency warfare that would later be employed in Vietnam, Afghanistan and Iraq. This included the first ever aerial bombardment of civilian populations, burning villages, forcing people off their land and herding them into concentration and forced labor camps, killing women and children on the grounds of being “auxiliaries” of the rebels and the systematic torture and summary execution of prisoners.

Among them was the caco leader Peralte. After killing him, the Marines photographed his body tied to a door and circulated copies of it among the population to convince Haitians not to resist. The image, which resembled a crucifixion, had the opposite effect, stoking popular hatred of the occupiers and turning Peralte into a martyr.

Reflecting on his military actions in Haiti and elsewhere in an essay published by the socialist magazine Common Sense, Marine commander Smedley Butler wrote, “I spent most of my time as a high class muscle man for Big Business, for Wall Street and the bankers. In short, I was a racketeer; a gangster for capitalism.” His mission in Haiti, he said, was to create “a decent place for the National City Bank boys to collect revenues in.”

Butler’s most lasting contribution to Haiti was the creation of the Garde d’Haïti, a collaborationist military force that provided the nucleus for the Haitian army, which dominated the political life of the country after the US withdrew its forces in 1934.

Military rule set the stage for the assumption of power by François Duvalier in 1957, inaugurating a dynastic dictatorship that would oppress the Haitian population for another three decades, employing horrific violence through its secret police, the tonton macoutes. The regime headed by François “Papa Doc” Duvalier and then his son, Jean-Claude “Baby Doc” Duvalier, was backed by successive US governments as a pillar of anti-communism until 1986, when a mass rebellion forced “Baby Doc” to flee the country aboard a US Air Force plane.

Since then, Washington has intervened in the country repeatedly to impose its neo-colonial domination and install corrupt puppets in the presidential palace. It engineered two coups, in 1991 and 2004, to overthrow elected President Jean-Bertrand Aristide, a former priest, whose association with the mass protest movement that toppled Duvalier and his left nationalist rhetoric won him a following among the country’s impoverished masses and unconcealed hatred within powerful US foreign policy circles.

US troops intervened in Haiti in 1994, 2004 and 2010. After the 2004 intervention, which overthrew Aristide and bundled him off to Africa on a US military jet, US troops were succeeded by a United Nations peace-keeping force known as MINUSTAH, which was commanded by Brazilian generals and served to quell popular unrest in the shantytowns of Port-au-Prince and prevent the resurgence of any rebellion from below. The UN force remained in Haiti until 2017, leaving behind a cholera epidemic that spread from foreign troops to the population, killing an estimated 10,000 Haitians.

The present political crisis in Haiti is “made in the USA.” Corrupt and right-wing governments have been installed through direct US interference in the country’s political life. In 2011, there was the installation of the former singer and associate of the ex-Duvalierists, Michel “Sweet Micky” Martelly, a favorite of Hillary Clinton, and then that of his hand-picked successor, the recently assassinated Jovenel Moïse.

Both presided over governments committed to the interests of foreign capital and the venal Haitian bourgeoisie, while ruthlessly suppressing mass protests and operating a web of corruption that siphoned off billions of dollars in government funds. Moïse maintained US support, including from the Biden administration, until his death, even as he gutted the country’s legislature, judiciary and local governments, ruling by decree.

The evidence that has emerged thus far in the Moïse assassination is covered in Washington’s fingerprints. The Colombian mercenaries alleged to have carried out the killing were from an elite US-trained special forces unit. A Haitian accused of working with the mercenaries was a key Haitian “asset” of the DEA and FBI. And the US-based security contractor who is accused of recruiting the Colombians and arranging their flights to Haiti is well known in south Florida political circles and played a role in the CIA-orchestrated provocations against Venezuela on the Colombian border.

Given this history, the obvious question arises: how is another US intervention going to save Haiti? Its present crisis and the oppression of a population in which 70 percent of Haitians live on less than $2 a day, two-thirds lack adequate access to water and sanitation and half are undernourished is a direct product of a century of US imperialist interventions.

Of course, the Washington Post has a long and sordid record of promoting US “boots on the ground.” Over the course of the last three decades, it has promoted one intervention and war after the other, from the first Persian Gulf War and the intervention in former Yugoslavia, to the invasions of Afghanistan and Iraq. In 2003, it denounced “obstructionist diplomats” and “antiwar demonstrators” for failing to recognize that Iraqis were “greeting the Marines as liberators.”

In 2013, it derided the Obama administration for failing to put US “boots on the ground” in Syria to secure the victory of the CIA-backed and Al Qaeda-linked militias in the war for regime change against the government of Bashar al-Assad.

There is no doubt that the Post, in its promotion of American militarism across the globe, serves as a mouthpiece for powerful sections of the US ruling establishment and its military and intelligence apparatus.

If the intervention that the Post is advocating in Haiti is realized, it will unleash another crime against the Haitian people. Its motivation will be not the promotion of democracy or the security of the population. Rather it will constitute an assertion of US imperialist hegemony in the Caribbean, under conditions in which it is being challenged in its “own backyard” by the rising economic influence of China, as well as an attempt by the Biden administration to preempt any surge of Haitian migrants to the US.

The working class in the United States must oppose any US or US-orchestrated military intervention in Haiti. The task of liberating the Haitian people from the “anarchy” produced by imperialist oppression is that of the Haitian working class and oppressed masses, not the militarists and coup mongers whose views are expressed in the Washington Post.