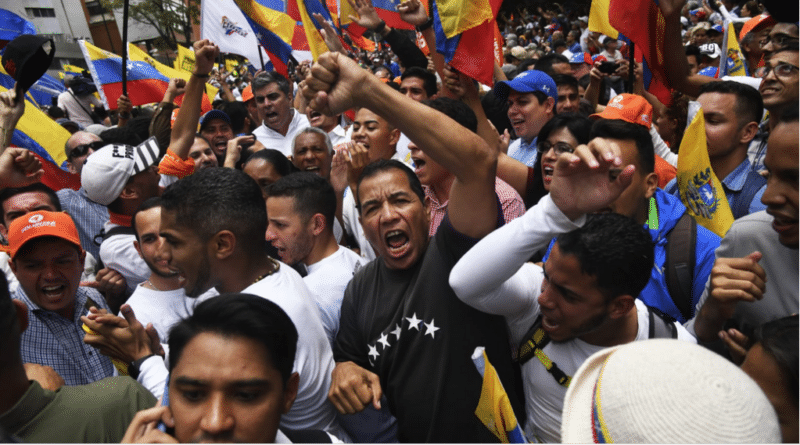 HBO Max began streaming a documentary on September 15: A La Calle (“To the Street”). It portrays US-backed opposition leaders in Venezuela as pro-democracy heroes battling a brutal dictatorship—a total reversal of the truth. A Daily Beastarticle (9/13/21) promoting the film is headlined “Capturing Venezuela’s Descent Into Socialist Hell,” which succinctly conveys the film’s slant, and suggests why it found a big corporate platform like HBO Max, a subsidiary of AT&T‘s WarnerMedia.

Legacy of violent coup attempts
López, a former oil industry executive, was one of the perpetrators of a US-backed coup in 2002 that briefly ousted the democratically elected president at the time, Hugo Chávez. A dictatorship under business executive Pedro Carmona killed 60 protesters during the two days it was in power. (Another 19 people, half of them Chavistas, were killed in violent confrontations just before the coup.) López—along with another prominent politician, Henrique Capriles—led the kidnapping of a Chávez government minister while Carmona was in power. López appeared on local TV, proudly saying that he had briefed “President Carmona” about the kidnapping.

Several months later, López backed a second major coup attempt, the opposition-led sabotage of the oil industry that supplied almost all Venezuela’s export revenue. The coup attempts against Chávez drove the poverty rate to over 60%by early 2003.

López supported violent protests again in 2013 after the candidate he backed, Capriles, refused to accept his loss to President Nicolás Maduro in the first presidential election after Hugo Chávez’s death. Later that year, López criticized Capriles for calling off the protests, saying they should have continued until Maduro was ousted. When Capriles called off the protests, they had already left nine people dead, all supporters of Maduro.

López initiated protests early in 2014 that led to 43 deaths: Half of them strongly indicate the responsibility of his supporters. It was only after leading that fourth US-backed effort to oust the elected Venezuelan government that López finally went to jail.

Not excusing but ignoring crimes
I watched the whole documentary, curious to see how exactly the film would whitewash all the coup attempts López was involved with, and how it would deny the violence his supporters and allies perpetrated over the past 20 years.

I also wondered how the film would excuse murderous US economic sanctions on Venezuela—acts of war that have been linked to the deaths of tens of thousands of Venezuelans by the end of 2018 alone. By 2021, US sanctions, which have been relentlessly intensified since 2019, reduced Venezuela’s government revenue by 99%, according to UN special investigator Alena Douhan.

I expected to see bad arguments justifying all these crimes. Instead, the documentary edited them out of existence completely. None of these things were mentioned even once: nothing about the US-backed coup attempts prior to 2014, nothing about devastating economic warfare the US has inflicted on Venezuela since 2017.

Venezuelan economist Ricardo Hausmann and Tamara Taraciuk (deputy Americas director of Human Rights Watch) deserve special attention for the mendacity of the statements they made.

Distorted history lesson
In the film, Hausmann said that Chávez came to power because 1998, the year Chávez was first elected, “was an economically difficult year.” In fact, Venezuela had a few disastrous decadesbefore Chávez was first elected. Hausmann should know, because in 1992, he became a minister in the government of Carlos Andres Pérez, which had perpetrated the Caracazo Massacre in 1989: Hundreds, possibly thousands, of poor people were gunned down during five days of protests against an IMF-imposed austerity program.

In a recent article (FAIR.org, 8/26/21), Justin Podur and I reviewed Venezuela’s economic history, showing that it had always been plagued with shocking poverty and inequality, despite Venezuela being a major oil exporter since the 1930s. Of course, “Venezuela’s Descent Into Capitalist Hell” is not a headline you are likely to find in corporate media coverage from the pre-Chávez era.

After deceptively explaining why Chavez was first elected, Hausmann moved on to bigger lies. “Hugo Chávez, in the first five years, changed many things,” he said, “but the economic situation did not improve.”

That’s a very crude lie of omission. Hausmann neglected to say that within those first five years, Chávez was hit with two major US-backed coup attempts that devastated the economy. By surviving those coup attempts, Chávez was, in 2003, finally able to get control of the state oil company, PDVSA, the country’s main source of hard currency.

Hausmann then deceived viewers again by saying, “In 2004, the price of oil shot up. Suddenly Hugo Chavez realizes that he has a lot of money.”

The price of oil had actually been rising since 1998, the year before Chávez first took office. Fortunately for most Venezuelans, oil prices kept rising for several years after Chávez finally wrested control of PDVSA from saboteurs. The economy was therefore able to quickly recover from the coup attempts and begin a period of dramatic poverty reduction.

No ‘recent’ precedent?
About 40 minutes into the documentary, Tamara Taraciuk of Human Rights Watch says that the violent protests of 2017 (which the film shows Leopoldo López encouraging from his jail cell) have “no precedent in recent Venezuelan history.” The word “recent” does a great deal of heavy lifting in this absurd statement.

Was the April, 2002 coup attempt (which killed 79 people, overwhelmingly supporters of Hugo Chávez, and briefly overthrew the government) not “recent,” deadly or politically significant enough to offer a “precedent” for the protests in 2017, which left 126 people dead? Also, it’s not clear if most of the victims in 2017 were opposition protesters. Some of the protesters perpetrated gruesome atrocities, like burning alive Orlando Figuera, a 21-year-old Afro Venezuelan government supporter.

What about the Caracazo Massacre of 1989, which was perpetrated by a pro-US government? Does it count as “recent Venezuelan history”? In five days, the Caracazo death toll surpassed, possibly by an order of magnitude, the combined death toll on all sides during US-backed protests against Venezuela’s Chavista governments in 2002, 2013, 2014 and 2017. (Incidentally, the Caracazo Massacre also had no impact on friendly US/Venezuela relations, or on the flattering US press coverage of the Venezuelan government at the time—FAIR.org, 8/26/21.)

About an hour and 28 minutes into the film, Taraciuk says that any “decent government” in Venezuela’s dire economic situation would “ask for help,” but that Maduro has “closed the door to international aid, which is available.” This was a commonly told lie around February 2019, when Trump’s government, fresh from recognizing Juan Guaidó as Venezuela’s interim president, demanded that Venezuela’s military defy Maduro and allow about $20 million of supposed “aid” to enter from Colombia (FAIR.org, 2/12/19).

Even at the time, this quantity of “aid” was a rounding error compared to the impact of economic sanctions that Trump had imposed since August 2017. Taraciuk never questions the “decency” of Trump deliberately choosing to strangle an economy that was already in crisis. That alone makes her comment obscene, but also, contrary to what she claims, Maduro had requested international aid that Venezuela was receiving prior to the US-led aid stunt of 2019 (FAIR.org, 2/12/19).

RELATED CONTENT: US Regime Change in Venezuela: The Documented Evidence

Committed to debunked propaganda
The documentary is so committed to debunked propaganda from 2019 that it also gives the impression that an aid truck on the Colombian border was set on fire by forces loyal to Maduro. “Three or four trucks entered into Venezuelan territory, but one of them was burned,” López says on camera. The Grayzone (2/24/19) and a bit later even the New York Times (3/10/19) refuted that lie at the time, noting that video shows that the truck was set on fire by an opposition protester.

After 2019, Western media actually moved on from pushing the lie that Maduro rejects international aid, largely because Trump, and now Biden, became so blatantly sadistic with their economic warfare on Venezuela (FAIR.org, 3/25/20, 7/21/21).

About 70 minutes into the documentary, Taraciuk strongly insinuates that votes were not secret during the May 2018 presidential election that Maduro won by a landslide, saying that voters “had to go through the punto rojo to register their vote.” The puntos rojos (“red points”) are kiosks the government has always set up near voting centers for exit polling. Even an anti-Maduro writer who attacked these kiosks as “blackmail” conceded that the government can’t know how people voted.

It’s also profoundly hypocritical to allege that Maduro coerced voters, while ignoring the obvious threat the US has sent Venezuelan voters since 2017: that crippling economic warfare against Venezuela will continue and intensify until Maduro is overthrown.

In any case, Maduro’s vote count in 2018 was in line with the level of support a Pew Research poll (hardly a pro-Maduro outfit) suggested he had several months later. It found that 33% of Venezuelans “trust the national government to do what is right for Venezuela.” That’s also a level of support among eligible voters that routinely wins elections in Canada, the US and UK (Mint Press News, 1/28/19).

Part of the Western media herd
Throughout the film, numerous clips from big media outlets reinforce the film’s dishonesty. Fox News correspondent Bryan Llenas says, “Venezuela is crumbling under the weight of Maduro’s oppressive regime.” A BBC journalist glares at Maduro with imperial contempt as he, quite validly, rejects the claim that his 2018 re-election was illegitimate.

Western media have long developed a kind of shorthand, repeated endlessly, that demands total impunity for US-backed politicians like Leopoldo López in Venezuela. Any legal consequences for US-backed sedition are portrayed as oppression (FAIR.org, 4/23/18).

US entertainment media have also contributed to the vilification campaign against Maduro’s government (FAIR.org, 9/18/19). Last year Ethan Hawke did a fawning interview with López (an old friend whom Hawke met while attending a private high school in New York). It’s very easy to see why HBO Max would feel comfortable streaming a documentary as ridiculous as A La Calle.