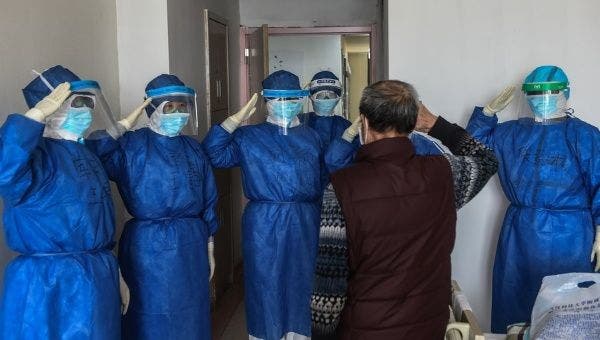 For over a year, the ravaging pandemic has put policymakers worldwide under the same unprecedented test: how to manage the intricate balance between safeguarding public health and mitigating the economic impacts.

Once the worst hit by the coronavirus, but now one of the very first to have contained the epidemic and restarted its economy, China has provided a clear and proven solution to the dilemma.

Under the leadership of the Communist Party of China (CPC) Central Committee, with Xi Jinping at its core, the country has walked a fine line between virus control and economic reopening, saved lives at all costs, fostered opportunities within the crisis, opened its doors wider despite strict COVID-19 containment, and coordinated short- and long-term goals.

Efficient control
It took China only six weeks this summer to contain a wave of COVID-19 resurgence attributable to the Delta variant, which first emerged in the airport of Nanjing in eastern China and quickly spread to multiple other cities.

Such quick and effective responses have been an essential part of the Chinese way to tame the virus. Back in 2020, Wuhan, capital of Hubei Province, closed outbound traffic for 76 days from January 23, 2020 onwards to stem the spread of the virus.

Xi, general secretary of the CPC Central Committee, said making the decision required enormous political courage. “The time called for resolute action. Otherwise, there would be trouble,” he said.

Thanks to strict and effective control measures, the spread of the virus in China was contained in just over a month. In around two months, the daily increase in domestic coronavirus cases fell to single digits. And within approximately three months, a decisive victory was secured in the battle against COVID-19 in Wuhan and the whole of Hubei.

Since then, only sporadic outbreaks occurred in China, and they were all quickly brought under control thanks to accumulated experience and targeted measures.

Domestically, authorities quickly clamped down on local flare-ups with measures like mass nucleic acid testing [PCR] and targeted lockdowns, which always led to a quick and distinct downward trend in new infections while minimizing the impact on people’s daily lives.

In September, high schools, primary schools, and kindergartens in most regions started the new semester on time, and cross-provincial travel also resumed in most areas.

China managed to maintain a fair number of international flights while strictly containing the spread of COVID-19 by introducing a reward and suspension mechanism. A flight suspension will be carried out if the number of passengers testing positive on the flight reaches a certain number.

In comparison, the United States has recorded over 43 million COVID-19 cases, with about 690,000 deaths, according to the latest data.

Despite some criticism that China has invested too much in epidemic prevention and control, the country has achieved remarkable results at a relatively low cost.

China was the world’s only major economy to post positive growth last year. Its GDP expanded 12.7% year on year in the first half (H1) of 2021, putting the average H1 growth for the past two years at 5.3%, said the National Bureau of Statistics.

Partly due to the need to cope with unusual circumstances, the country raised its deficit-to-GDP ratio in 2020.

Still, the overall deficit as a share of GDP in 2020 for China was lower than the average level for advanced economies, according to a report released by the International Monetary Fund in April this year.

People first, life first
On May 12, International Nurses Day, 88-year-old Qu Wanfang, accompanied by his family, expressed his gratitude in person to the medical staff of Taihe Hospital in Shiyan City, Hubei province.

Qu was diagnosed with COVID-19 in February last year. Six “critically ill” notices were issued by the hospital to his family.

Thanks to the combination of traditional Chinese medicine and Western medicine, psychological counseling, and nutritional support, he survived after 47 days of treatment by a special team of nine medical workers.

“Whatever was available to save his life was used,” said Luo Jie, the hospital’s president.

“What is ‘people first’?” stated Xi Jinping. “So many people worked together to save a single patient. This, in essence, embodies doing whatever it takes (to save lives).” Xi made the comments during deliberations with fellow deputies from Inner Mongolia Autonomous Region at the 13th National People’s Congress on May 22, 2020.

The per capita treatment cost of a COVID-19 patient in China is 23,000 yuan, and the treatment cost for a severe patient exceeds 150,000 yuan. By the end of June, 2.8 billion yuan of medical expenses had been allocated for hospitalized COVID-19 patients nationwide, of which 1.631 billion yuan was covered by medical insurance. More than 2.2 billion COVID-19 vaccine doses have been administered free of charge across the country so far.

“Regardless of cost, everything makes way for life,” said Wang Wen, executive dean of the Chongyang Institute for Financial Studies at Renmin University of China. “This is the embodiment of the people-oriented thinking of traditional Chinese culture, and highlights the people-centered governance philosophy of the Communist Party of China.”

Turning challenges into opportunity
“Crises and opportunities always exist side by side,” said Xi Jinping, speaking with local officials of Zhejiang Province, China’s eastern economic powerhouse, in April 2020. “Once overcome, a crisis is an opportunity.”

Since the COVID-19 outbreak, a slew of technologies have been developed in China’s battle against the novel coronavirus. These include a reagent testing kit capable of screening COVID-19 in 30 minutes.

Fixed-asset investment in China only increased by 2.7% year on year in 2020, but in the health and social work sector it soared by 26.8%.

In the first eight months of 2021, the value-added output of the pharmaceutical manufacturing industry increased by 30% year on year, much higher than the average level of the overall manufacturing sector.

While striking a strong blow to traditional industries, the health crisis has stimulated an accelerated growth of the digital economy and emerging industries.

Seizing the opportunity, the Chinese government has encouraged new infrastructure construction. A over one million 5G base stations have been built. Emerging industries such as intelligent manufacturing, unmanned logistics, online consumption, and medical and healthcare have shown strong growth momentum.

“A crisis in the economy could sometimes be a good opportunity to boost economic transformation and upgrading. Seizing the rise of the new economy can create new vitality in the crisis,” said Ji Weidong, dean of the China Institute for Socio-Legal Studies affiliated with Shanghai Jiao Tong University.

China’s contribution to the world
As China, a major country with 1.4 billion people, holds a strong line of defense against COVID-19, it makes significant contributions to the global fight against the virus.

There is ample proof that by taking the lead in bringing the virus under control and resuming work and production, China plays its role as the largest supplier of global anti-pandemic materials and promotes worldwide anti-pandemic cooperation and economic recovery.

China has also made a solemn commitment to making COVID-19 vaccines a global public good and promoting vaccine accessibility and affordability in developing countries.

China has provided more than 1.25 billion vaccine doses to more than 100 countries and international organizations, and medical supplies to more than 150 countries and 14 international organizations. It has supplied more than 320 billion masks, 3.9 billion protective suits, and 5.6 billion nucleic acid testing (PCR) kits globally. In addition to donating $100 million USD to COVAX, China will donate 100 million additional vaccine doses to other developing countries this year.

China has been making unremitting efforts to rally global consensus on COVID-19 response, and promoting the building of a community of common health for humanity.

The current pandemic may appear overwhelming, but humanity will surely overcome it and prevail, said Xi in his statement delivered via video at the general debate of the 76th session of the United Nations General Assembly on September 21.

To date, China has built or is building bottling bases for bulk vaccines in 15 countries, building local vaccine production centers, and providing technical support for countries that need vaccine cooperation.

China has twice invited WHO experts to China for origins tracing research on the principles of science, openness, and transparency. The experts went to all the places they desired and met all the people they wished to meet. The conclusions and recommendations of the China-WHO joint study report have been recognized by the international community and the scientific community.

“Only by rejecting the practice of forming small circles or zero-sum games and adopting the concept of one big family and win-win cooperation can we jointly take the road of peaceful coexistence and mutual benefit,” said Ruan Zongze, executive vice president of the China Institute of International Studies.

China has not become “closed,” but more open.

Despite the disruptions of COVID-19, China has, so far, signed more than 200 cooperation documents on Belt and Road cooperation with 140 countries and 32 international organizations. In the first eight months of this year, more than 10,000 China-Europe freight trains went to over 170 cities in 23 European countries.

On March 6, 2020, Xi stressed overcoming the impact of COVID-19 to clinch a complete victory in the fight against poverty at a symposium on securing a decisive victory in poverty alleviation.

Xi said that lifting all rural residents living below the current poverty line out of poverty by 2020 was a solemn promise made by the CPC Central Committee, and it must be fulfilled on time.

He called for continuous efforts on poverty alleviation, saying it is a tough battle and greater significance must be attached to it in the final push.

Several months after the symposium, China achieved the feat of removing all remaining counties from the country’s poverty list.

On November 23, 2020, the last nine impoverished counties, all in southwest China’s Guizhou Province, eliminated absolute poverty. It means that all 832 registered poor counties in China have shaken off poverty.

On February 25, 2021, Xi announced that China secured a “complete victory” in its fight against poverty while addressing a grand gathering in the Great Hall of the People in Beijing to mark China’s poverty alleviation accomplishments and honor model poverty fighters.

On July 1, 2021, Xi declared that China realized the first centenary goal of “building a moderately prosperous society in all respects” at a grand gathering to celebrate the 100th anniversary of the CPC’s founding.

Long-term development planning is always on the agenda of Chinese authorities even as the country confronts severe tests from the epidemic.

In March 2020, at a critical moment of leading the Chinese people to fight the epidemic, Xi personally led the formulation of the CPC Central Committee’s proposals for the 14th Five-Year Plan (2021-2025) for National Economic and Social Development and the Long-Range Objectives Through the Year 2035.

One year later, China’s top legislative body approved the Outline of the 14th Five-Year Plan (2021-2025) for National Economic and Social Development and the Long-Range Objectives Through the Year 2035, a roadmap of the country’s new journey toward socialist modernization.

The fact that China has included its experiences and reflection of epidemic control into the plan shows the Party’s strategic determination to coordinate the present task and the long-term goal, said Liu Qiao, dean of Guanghua School of Management, Peking University.

Indeed, history has proven that China can ensure the success of development and security at the same time and is determined to achieve national rejuvenation.

The Xiong’an New Area construction is at full throttle, and the Hainan free trade port construction is in full swing. The Pudong New Area in Shanghai is on the way to becoming a pioneer area for socialist modernization.

“The image China presents to the world today is one of a thriving nation that is advancing with unstoppable momentum toward rejuvenation,” said Xi when addressing the ceremony celebrating the CPC centenary.

Featured image: An elderly COVID-19 patient who is about to be discharged from a healthcare center salutes medical workers in Wuhan, central China’s Hubei Province, March 14, 2020. | Photo: Xinhua/Zhao Jiaqing