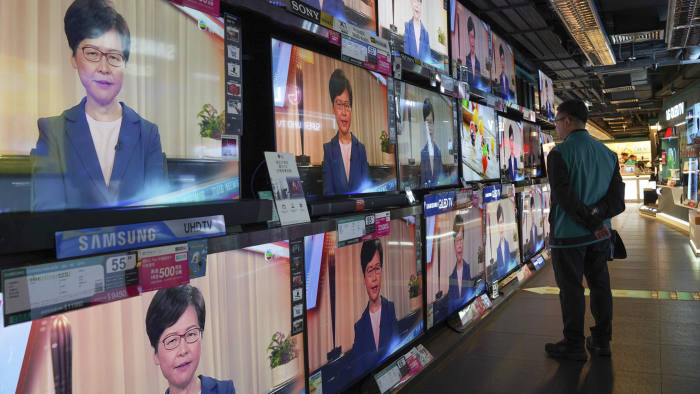 Hong Kong’s Chief Executive Carrie Lam has laid out her plans to end the western-backed protests, including the formal withdrawal of the controversial extradition bill. Lam also announced other measures, aimed at bringing the people together and peacefully ending the protests that have brought chaos and violence to the city.

At a press conference on Wednesday, Lam set out her plans saying, “”Many would say that we need a common basis to start such a dialogue, and that this has to start with the Chief Executive. I now present four actions to initiate this dialogue.”

The most important point is the formal withdrawal of the contested ‘Extradition Bill’ which was the original trigger for the opposition protests. Proposed originally by Beijing and the HK government in response to a Hong Kong resident murdering his pregnant girlfriend in Taiwan, and subsequently escaping justice by fleeing the mainland, the bill hoped to establish legality for the extradition of Hong Kong residents to the mainland if their crime had been committed there.

Protesters opposed the encroachment of Beijing on the Hong Kong legal system, and came out in large numbers against it.

Another important point announced by Lam was the appointment of former Director of Education Helen Yu Lai Ching-ping and lawyer Paul Lam Ting-kwok to the Independent Police Complaints Council (IPCC). The council will review police practices during the protests, and will listen to complaints brought by protesters.

Though protesters have alleged police brutality, many have praised the authorities for exercizing restraint. So far not a single protester has died as a result of clashes with police, despite the often violent nature of the western-backed protests.

Additionally, Lam said that her government will establish a platform for dialogue with the opposition, visiting communities across Hong Kong, she said, “After more than two months of social unrest, it is obvious to many that discontentment extends far beyond the Bill. It covers political, economic and social issues… We can discuss all these issues in our new dialogue platform.”

Finally, the Hong Kong chief promised to take seriously the demand for universal suffrage, but said that such discussions must be had “within the legal framework and in an atmosphere of mutual trust and understanding”. Rather than the atmosphere of violence brought about by protesters. Whilst addressing this issue, Lam also refused to accept demands that she stop referring to the protests as ‘riots’.

Riots occurred again in Hong Kong today. Radical protesters set fire near Hong Kong police headquarters. I saw police are dispersing illegal demonstrators there. I witnessed how violent protests have destroyed this city. I love Hong Kong and I condemn the rioters. pic.twitter.com/k9zaLg36gS

The move has been celebrated in Chinese public media as a sign of conciliation and peace, the Global Times stated. “The decision to formally pull back the bill marks a significant step by the SAR government to show its sincerity in resolving tensions, and its commitment to end the unrest.”

Nevertheless, extremist sections within the protest movement have rejected the measures. Two masked protesters released a video outside the legislative council condemning Carrie Lam. Though it’s not clear how representative they are of the movement as a whole.