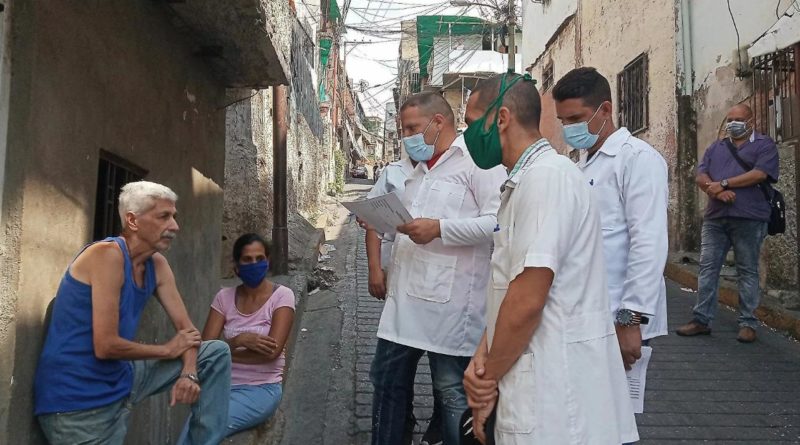 One of the strategies for dealing with the coronavirus in Venezuela is, in addition to quarantine, house-to-house visits that doctors make to detect cases of contagion and treat them early. Many of the doctors are Cuban, and they walk around the neighborhoods every day in their white coats and masks.

They search for cases of coronavirus infection even inside the home. This is what the so-called “house-to-house” approach is about, one of the most effective methods that has been implemented in Venezuela, along with quarantine, to deal with the COVID-19 pandemic.

The scenario has been repeated every day since the deployment of the SARS-CoV-2 strategy began shortly after the first cases were confirmed in the country on Friday, March 13. Currently, in the state of Miranda alone, in central-northern Venezuela, at least 1,500 Cuban doctors are covering the neighborhoods with their white coats, masks, lists to be filled in with data on the people visited in their homes.

It is not a random route. The deployment is based on a database collected by the government through a digital data storage system – called Plataforma patria – (the Patria system) where those who have symptoms report their situation.

Thus, instead of having an influx to health centers, doctors go to those who may have COVID-19.

“We go — doctors, nurses, laboratory personnel, looking for the houses where there are people who have had contact with people from abroad and people who have symptoms and have reported through the Plataforma patria,” explains Rafael Crespo Plasencia, a doctor who recently arrived from Cuba to join the battle against the coronavirus.

The work is also educational: “There are still people who do not perceive risk; they have not been very well informed despite all the information networks, radio, and television. At home they are informed that they should wear a face mask and wash their hands.”

The majority of people comply with the rules, although during a tour of a popular neighbourhood in Petare, in Caracas, Plasencia pointed out that some people still do not use a mask when they stand, for example, at the door of their house. This is the absence of risk perception, he insists.

How does the Venezuelan health system work?

The San Miguel Arcángel Integral Diagnostic Center (CDI), or Petare Cemetery, as it is known in the area, is located on a main avenue. Behind it is one of Petare’s many neighborhoods that rise on a hill through narrow streets, corridors, stairs, a labyrinth for those who do not know.

The CDI’s belong to the secondary level of health: on the first level are the Barrios Adentro clinics, and on the third level are the hospitals. The CDIs, together with the consulting rooms, are part of the health architecture that was developed during the Bolivarian revolution in conjunction with the Cuban medical mission in the country.

One of the keys to that system was based on two central pieces: prevention and community participation, which are part of the current keys in the strategy to combat the coronavirus.

The health personnel who go out every morning to tour the neighborhood from the CDI are accompanied by an individual belonging to one of the popular forms of organization that exist in the neighborhood, such as communal councils, communes, local supply and production committees.

“We accompany the doctors on the tours to take them to the houses, we are always there, because we know our community, we know the cases, otherwise they are like boats adrift,” explains Norma Josefina Urbina, part of the community council, who walks with Plasencia and the healthcare group that tours the steep neighborhoods.

They are another great strength along with the digital database with the cases of people with coronavirus. They know who lives in the homes, the people most at risk, who had symptoms and didn’t report them. They guide Cuban and Venezuelan doctors with knowledge of the area.

The objective is “to detect any person who has any symptoms, including respiratory ones, and to visit and assess the state of health of the most vulnerable groups, such as the elderly, women, pregnant women and people with chronic diseases,” explains Carlos Luis Oliver Santana, a Cuban doctor who has been in the country for a year.

A total of 11,988 people have been visited, of the approximately 37,000 who live within the radius of action of the CDI Petare Cemetery. The work is daily, constant.

In the homes they talk to people, ask questions about possible symptoms, and contact with people who have returned from abroad or who have had the virus and “if we notice any symptoms or evidence” then the person is transferred to the CDI and “is given a quick test that does not cost anything.

Petare belongs to the state of Miranda, where about 3 million people live. There are 60 CDI’s for this territory, of which 38 are the Sentinel CDI’s, which provide 24-hour surveillance to deal with the pandemic. “They deal with all pathologies, but only respiratory conditions related to the coronavirus are admitted,” explains Angel Sierra, the state’s deputy chief medical officer.

The CDI Cemetery of Petare is one of these 38 sentinels and has been equipped to carry out this mission. At the entrance there is a doctor protected from head to toe with a complete suit, gloves, mask, and eye protection, who receives patients with symptoms.

If they are in one of these situations, they are admitted to the intensive care unit where they are isolated, placed under observation for 14 days – the incubation time of the virus – and given the various drugs, such as interferon, to strengthen the immune system.

Once they are discharged, “a doctor will visit you at home for seven days to see that there are no symptoms.”

Sierra explains that they have “all the resources, supplies, medicines and equipment to treat the coronavirus in all the CDIs. In Miranda, they have a total of 2,198 members of the Cuban health team, of whom an average of 1,600 travel to investigate, while the rest provide care. Between 49,000 and 52,000 patients are seen daily, and 500 are detected with respiratory symptoms every day.”

Coronavirus in Venezuela: a Model of Combat

The house-to-house system has been successful in Venezuela. It is a method that builds on what had already been established in terms of healthcare and popular organization, reinforced by the arrival of medical supplies from countries such as China, Russia, Cuba, as well as international agencies such as the Red Cross and the Pan American Health Organization (PAHO), the regional arm of WHO.

Its implementation has made it possible to launch an offensive against the coronavirus, conducting a search of every home to detect it early and avoid complications in patients, breaking the chains of transmission, and preventing its proliferation – which can be very fast, as has been demonstrated in other countries, such as Italy and Spain.

This is part of the reason why the curve remains flat in Venezuela. The role played by Cuban aid is crucial, as much as it was in building part of the healthcare system from the beginning of the Bolivarian revolution. There are doctors, every day, in the hills, in their white coats, masks, knocking on door after door, asking questions, giving advice, contributing to the battle against the pandemic.