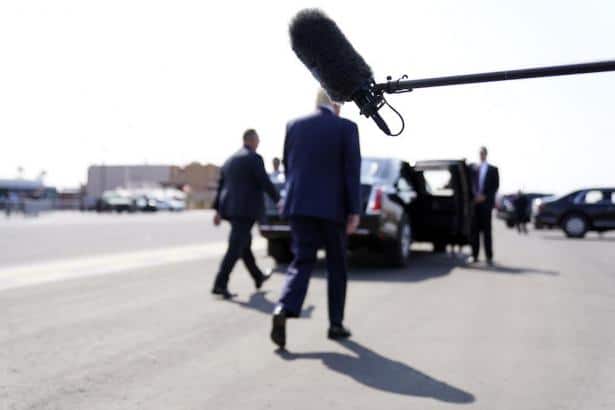 Every so often, you’ll watch a congressional hearing (if you’re me) or you’ll be on a Zoom call (if you’re everybody) and you’ll see someone’s lips moving with no words coming out, and inevitably a member of Congress or Jan from HR will remind them, “You’re muted.” What’s happening there is a complex phenomenon known in the annals of amplification as the mic being off. In the event of a broadcast situation, whether to lobbyists in a congressional hearing room or the gang from the office working from home, if your mic is off nobody can hear you.

Believe it or not, the same thing works in broadcast television. I will impart to you my wise experience of nearly 20 years in the television industry. There’s a sound engineer in any studio environment, and he has everyone’s mic wired into a different spot on the soundboard. He can turn the mic up or down, so the signal broadcast out to the world can either hear or not hear the speaker. This is helpful when you have people on screen speaking over one another, or out of turn, or in the case of The Jerry Springer Show or some such operation, when there’s just someone so unruly that they won’t shut up.

In a situation where you have two speakers, and each of them is supposed to get an uninterrupted amount of time during a portion of the program, you could simply bring up that person’s mic, and “cut” the other one (that’s a technical term). Anyone who has watched Fox News or really any news program with a guest can plainly see that, when it’s the host’s turn to speak, the mic of the guest is turned down. Sometimes, if Bill O’Reilly is the host, this cutting of the guest’s mic is very explicit: Normally it’s just implied.

Sure, if the two individuals are in the same room, and one of them is ranting with their mic cut, it may be hard for the other person speaking to concentrate. But that’s life in the big city, and something that public speakers have to get used to. If they know that they’re in control of the mic, and therefore the situation, they can just ignore the other speaker and plow forward, confident that their message is getting across to the people at home, who matter more than the people in the room. (Heck, even in the room only the person amplified will be heard, as that’s how a microphone works.)

Now, why am I relating this as if I’m speaking to an eight-year-old? Because the eight-year-olds at the Commission on Presidential Debates are apparently unaware of the power of amplification. The Progressive Change Campaign Committee has now made explicit an ask of the commission, saying, “In the next debates, you must CUT THE MIC when it’s not a candidate’s turn to speak to control the situation and allow the debate to go forward.”

You would think, if the commission had rules that each candidate would get two uninterrupted minutes at the beginning of each section of the debate, that they would have mastered this concept on their own. Those certainly didn’t have to be the rules. You could have rules with no conditions on cross talk and interruption. But they were the rules, agreed to by both campaigns. And the simplest tool known by every television producer in the history of the medium is available to enforce that rule. If the moderator won’t do it, the sound engineer can.

Now let me tell you why the Commission on Presidential Debates will not resort to this time-honored tactic. The commission, run by corporate lobbyists from both parties, more than anything wants to display their neutrality. Though it’s entirely neutral to enforce a ground rule agreed to by all sides that an uninterrupted segment of the debate remain uninterrupted, this tactic would be met with howls of derision by the most frequent interrupter, maybe lead to a boycotted debate, and would upset the delicate control that the commission, a perfectly fictitious corporation sponsored by other private corporations, wants to project.

More to the point, television news has invited the kind of brawling style on display last night. They act as theater critics watching a play and give points to the more “aggressive” contributor to the debate, judging the candidates on style far more than substance. To allow for uninterrupted points of the debate would mean actually having to listen to what the candidates have to say, which would be awful. They view television through the lens of conflict and have created the reality show in which we now find ourselves.

Though history in the Trump era begins the moment people wake up in the morning, this is not the first debate marred by endless cross talk from politicians with a sense of entitlement, who know that they can just blow past the agreed-to debate rules to get their message out. The way the media has run debates for years, the same way they run panel discussions and interviews, has contributed mightily to this mess. They have a way out, but they don’t want to use it. They want to maintain “neutrality” but refuse to implement any steps to that end. The reason the debate was a “shitshow,” as Dana Bash called it, is because of the people who have been stirring the shit for the last few decades.

David Dayen is the executive editor of The American Prospect. His work has appeared in The Intercept, The New Republic, HuffPost, The Washington Post, the Los Angeles Times, and more.