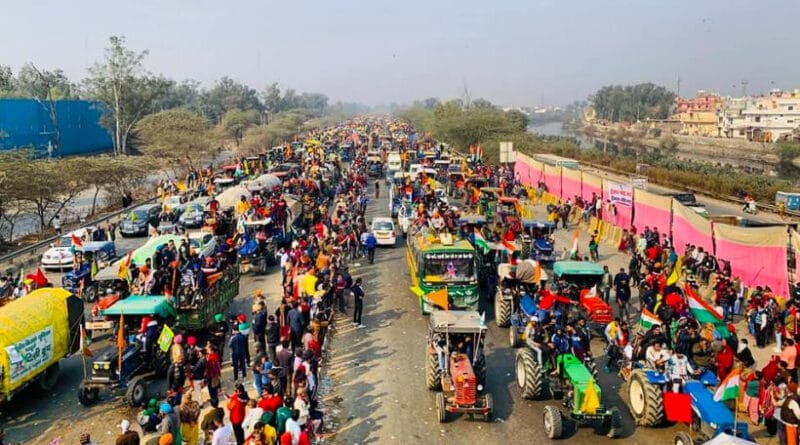 For the past three months, Indian farmers and agricultural workers have been in the middle of a difficult struggle against the government of Prime Minister Narendra Modi. Tens of thousands of them have gathered around the capital city of New Delhi; they say that they will not disband unless the government repeals three laws that negatively impact their ability to remain economically viable. The government has shown no sign that it will withdraw these laws, which provide immense advantages to the large corporate houses that are close to Prime Minister Modi. The government’s attempt to crack down on the farmers and agricultural workers has altered the mood in the country: those who grow the food for the country are hard to depict as “terrorists” and as “anti-national.”

Modi’s party — the Bharatiya Janata Party (BJP) — currently holds power in several of the states that border Delhi. It is from these states — Haryana and Uttar Pradesh — that many of the farmers have gathered, although they have also come from far afield, from Bihar and Maharashtra (they have also come from Punjab, which is governed by the Congress Party). Even if there are some shifts in the political calculations in these states, particularly Uttar Pradesh (population 200 million), these will not be tested at the ballot box for some years to come: Punjab and Uttar Pradesh do not go to the polls until 2022, and Haryana will elect its legislative assembly in 2024 when the Indian parliament will face a general election. Modi is safe for the next three years, an eternity in contemporary political life.

Little wonder that he has not felt the need to make any concession to the farmers and that he has turned to the full arsenal of intimidation and violence to fragment the unity of the farmers. This intimidation includes a general attack on those branches of the media that have favorably reported the protest (Newsclick, a news portal, faces a bewildering investigation because—as is widely acknowledged—it had amplified the views of the protesting farmers).

Over the next few months, assembly elections will take place in one union territory (Puducherry) and four states in India: Assam, Kerala, Tamil Nadu and West Bengal. To put this into perspective, the populations in these four states total 225 million, by itself the fifth-largest country in the world behind Indonesia. That the democratic fate of so many people will be decided by May 2 and that these elections get so little attention outside India tells one a great deal about the Eurocentrism of our global media (certainly the result of the national election in Germany—with a population of 83 million—will be far more consequential than these five regional elections in India, but nonetheless the lack of any interest should not be shrugged at).

The prime minister’s extreme right party, the BJP, is in power in only one of these states, Assam (population 31 million). It is likely that the BJP will retain hold of that state, although there is tension around the highly unpopular Citizenship Amendment Act (CAA) pushed by the BJP in 2019. In a triangular contest, the BJP and its allies will face on the one side a grand alliance of the center-right Congress Party and its Left and regional allies; and on the other side, newly formed anti-CAA parties (the Assam Jatiya Parishad and the Raijor Dal). Fragmentation of the anti-BJP vote could very well be decisive for its re-election, a point made by the Congress Party, which has sought unsuccessfully to bring in the new parties.

West Bengal (population 91 million), like Assam, will face a triangular contest between the ruling Trinamool Congress (TMC), the BJP, and a bloc of the Communists and the Congress. On February 28, 2021, more than a million people gathered at Kolkata’s Brigade Ground for a massive show of strength led by the Left and its allies against both the BJP and the TMC. The Left Front had been in power in West Bengal from 1977 to 2011, when it was ousted by the TMC. Since then, the TMC has gone in and out of alliance with the BJP in Delhi, and it has promoted corruption, cronyism and social despair. The power of BJP money and the projection of Prime Minister Modi as a charismatic figure have drawn key TMC leaders into the BJP. This is the first time that the Left and the Congress are going to the polls together. A recent ABP/C-Voter poll found that the TMC looks to be on track to hold the state government.

RELATED CONTENT: Farmers’ Protest in India: Price of Failure will be Immense

Regional parties such as the TMC are a familiar feature in India’s larger states. Here linguistic sub-nationalism provides the foundation for the local elites to drive their own agenda through such entities. In Tamil Nadu (population 68 million), the history of anti-Brahmin agitation led to the creation of a non-Brahmin party, which then fissured into several parties, two of which (AIADMK and DMK) remain the dominant forces in the state’s politics. The AIADMK, currently in power, is gripped most tightly by the regional elites and has an intimate relationship with the BJP even if there are some social divergences. The DMK, on the other hand, has been smart with its alliances, although it is dogged with accusations of nepotism. As in earlier elections, the DMK has made an alliance with the Left, which has deep pockets of support among the working class and the peasantry; anti-privatization fights, led by the Left, will help the alliance gain the support of workers in densely populated urban areas. Opinion polls suggest that the DMK-Left alliance will prevail in Tamil Nadu.

Since 1980, the electorate of Kerala (population 35 million) has not re-elected its state government, with power oscillating between the Left Democratic Front and the United Democratic Front. This year, the Left Democratic Front (LDF), which has been in office since 2016, looks set to break the pattern and return to power. There is widespread agreement that the LDF government — led by Chief Minister Pinarayi Vijayan — has fulfilled the promises of the communists’ 2016 manifesto; there is overwhelming clarity that the LDF administration has been efficient and rational. The LDF government confronted a series of cascading crises with calm competence: the aftereffects of Cyclone Ockhi in 2017, the Nipah virus outbreak of 2018, the floods of 2018 and 2019, and then the COVID-19 pandemic (Health Minister K.K. Shailaja was called the “Coronavirus Slayer” by the Guardian). Despite what seemed like a never-ending cycle of crises, the government pushed hard to strengthen public education and public health care, and to provide housing and food to the public.

No anti-incumbency was visible in the local body elections in 2020, when the young—largely female—candidates of the LDF triumphed. The LDF opened its 2021 campaign with a march to deepen development (Vikasana Munnetta Yatra) that began at the north and south ends of Kerala’s length. Development is the key theme—the promises that the LDF government has met include a major push to build basic infrastructure through the pro-people budgets of Finance Minister T.M. Thomas Isaac. The LDF record is strong, which is why it has entered the election campaign with the slogan “Urappaanu LDF” or “LDF for Sure.”

The return of the Left to government in Kerala would be significant, but it is not a bellwether of the Left’s overall strength in India. Nonetheless, the cycle of farmer agitations and the linkage with the main trade union federations suggests the possibility of the future growth of the progressive forces.

This article was produced by Globetrotter. Vijay Prashad is an Indian historian, editor and journalist. He is a writing fellow and chief correspondent at Globetrotter. He is the chief editor of LeftWord Books and the director of Tricontinental: Institute for Social Research. He is a senior non-resident fellow at Chongyang Institute for Financial Studies, Renmin University of China. He has written more than 20 books, including The Darker Nations and The Poorer Nations. His latest book is Washington Bullets, with an introduction by Evo Morales Ayma.

Featured image:  For over three months, farmers in India have been mobilized in protest camps outside the capital New Delhi to demand the immediate repeal of 3 farm laws which they allege paves the way for corporate domination. Photo: Newsclick