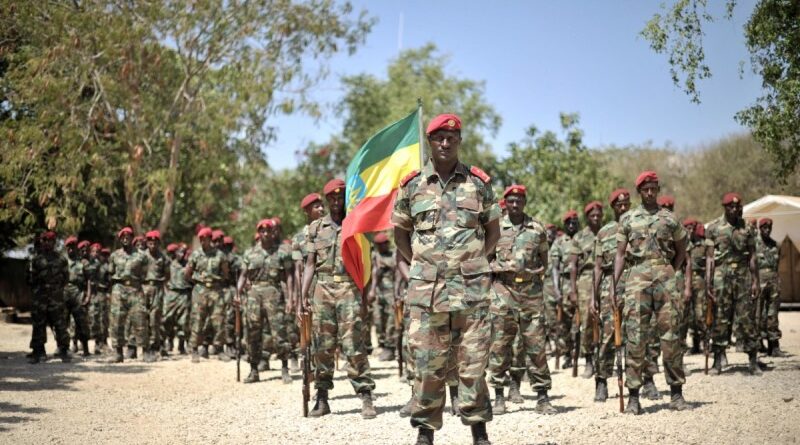 The ongoing conflict in Ethiopia’s Tigray region is largely framed in terms of a power struggle between the rebellious Tigray People’s Liberation Front (TPLF) and the Ethiopian federal government. Even though the TPLF has been dethroned from its regional stronghold of Mekelle by Ethiopian federal forces backed by Eritrea, Amhara regional forces and allied militias, fighting is continuing in the region’s rugged mountainous countryside. Power politics aside, the conflict has another layer that most analysts have failed to discern: the role of neoliberal market forces taking root with destabilizing effect under the leadership of Prime Minister Abiy Ahmed.

In a clash of ideological paradigms, Abiy’s administration has embarked on a path of neoliberalism that has placed Ethiopia in direct conflict with the Chinese-backed developmental state initiated by former leader Meles Zenawi, and principally favoured by the TPLF militants in the north. In part, the military intervention in Tigray is a push by Abiy to integrate the rebellious region into the neoliberal fold and to eliminate any remaining obstacles to his Western-backed reform agenda.

When Zenawi, Ethiopia’s former charismatic but despotic prime minister, hosted the 2012 World Economic Forum on Africa in Addis Ababa, he shocked the international financial elite by declaring that neoliberalism was a failed project. After taking over the reins of power in May 1991 following the ouster of Colonel Mengistu Haile Mariam’s Derg regime, Zenawi, who espoused Marxist-Leninism during his guerrilla fighting days, initially pursued watered-down free-market reforms in a bid to win over Western aid following the collapse of the Soviet Union.

Unlike other developing countries, Zenawi did not implement these reforms to the letter, but instead, positioned Ethiopia as the West’s preferred ally in its so-called War on Terror in the Horn of Africa. At the behest of the United States, Zenawi rolled Ethiopian troops into Somalia in December 2006 to topple the moderate Union of Islamic Courts (UIC) that had in the previous six months pacified much of south-central Somalia after defeating the notorious Mogadishu-based warlords. By playing proxy to US objectives in the region, Ethiopia regained its strategic geopolitical significance that it lost in the final days of the Derg regime. With Zenawi acting as the US’s “anti-terror” enforcer, the West could look the other way, as he cracked down on dissent with a level of political repression reminiscent of the Derg and imperial eras.

At the onset of China’s ascendancy in Africa in the early 2000s, Zenawi ditched his piecemeal reforms and vigorously promoted a “developmental state” loosely based on the Chinese and East Asian models. According to Stephanie Jay, writing for Jacobin, Zenawi’s vision placed Ethiopia in the driver’s seat of development, with ownership over key economic sectors and a tightly regulated private sector that served to advance the overall national development agenda. Under Zenawi, the developmental state became official policy in 2006. Despite this, Zenawi was able to play China off the West, allowing Chinese capital to extract Ethiopia’s resources with unfettered access to its vast oil reserves while retaining US support through the Pentagon-led military intervention in Somalia, aimed at neutralizing Al-Shabab and Al-Qaeda’s influence in the region.

Zenawi created state monopolies in key sectors of the economy, including the Ethiopian Electric Power Corporation (EEPCO), which operates about a dozen hydro-electric power plants across the country, the Ethiopian Sugar Corporation, the Ethiopian Railway Corp oration (ERC), Ethiopian Airlines, and the Metals and Engineering Corporation (METEC)—a military-owned conglomerate made up of 98 companies, two of which manufacture military equipment while dozens of othersmake civilian products including TVs, solar panels, trucks, construction machinery, plastic products and other goods. As Jay further notes, Zenawi saw METEC as critical to the centrally-planned economy, using it as a program to transform the country of 105 million people into a middle-income state by 2025 through investments in infrastructure and manufacturing.

It should be noted that the choice of the developmental state paradigm for Ethiopia is the result of a long process of searching for alternative development paths. The model aimed to bring structural change through prioritizing and modernizing agriculture and moving towards industrialization. It ushered in an era of unprecedented economic development with annual growth rates averaging around 10 percent for a straight decade. However, this growth mostly benefited a small clique of the TPLF elite while ordinary Ethiopians—who nevertheless gained better access to education, healthcare and potable water than ever before—still languished in poverty at the margins of society.

The Ethiopian developmental state was largely financed by Chinese largesse that infused billions of dollars into mega infrastructure projects. These include the $2.9 billion standard gauge Addis Ababa-Djibouti railway, connecting landlocked Ethiopia with the Djiboutian port of Doraley, which provides both passenger and cargo service. Construction of the 759-kilometre electrified railway began in 2011 and concluded in 2017 before it was officially launched the following year. Operated by the ERC, the line was jointly built by two Chinese state-owned companies, the China Railway Group (CREC) and the China Civil Engineering Construction Corporation (CRCC). In 2015, the $800 million, two-line Addis Ababa Light Rail System, totaling more than 30 kilometres, was completed with a north-south line running from the city centre to industrial areas in the south and an east-west line serving key residential and commercial districts.

Other gigantic projects of the developmental state include the Hawassa Industrial Park (HIP) in southern Ethiopia, which provides employment to around 100,000 low-wage earners and has 52 production units designed to accommodate the needs of 30 different international corporations. While Hawassa is a flagship industrial park focused on textiles and garments, Ethiopia has 10 other such parks leading production in other sectors of the economy.

Another mammoth project is the Grand Ethiopian Renaissance Dam (GERD) formerly known as the Millennium Dam. Built in the Benishangul-Gumuz region on the Blue Nile River, about 40 kilometres east of the border with Sudan, the $4.7 billion project is owned by EEPCO and is entirely financed by domestic bonds. The dam has the capacity to meet the electricity needs of Ethiopia, Sudan, South Sudan, and Egypt. The filling up of the dam reservoir has triggered a bitter diplomatic row with Egypt, which fears a significant reduction in its quota of the Nile waters. Egypt depends on 90 percent of its water needs from the river based on a 1959 agreement that gives it the lions share of the Nile.

According to Ethiopian scholar Messay Kabede, Meles’ criticism of neoliberalism stemmed from the fear that it may simply result in him and his followers losing power, as evidenced by the 2005 elections. In those elections, opposition parties that favoured a free-market economy registered sizeable victories in Addis Ababa and nationwide, directly threatening the TPLF’s hold on power. Even though neoliberalism is a failed project in Africa, reactionary oppositional forces peddle it as a tool to enlist Western support in a bid to wrestle power from authoritarian states. What made the promotion of the developmental state a necessity for Meles and his cronies was its overriding ability to effect absolute control of state power.

Abiy’s attempts to liberalize the economy through market reforms and privatization of previously TPLF-controlled public assets is aimed at dismantling the remaining vestiges of the developmental state. During his World Economic Forum speech in Davos in 2019, Abiy pledged to make doing business in Ethiopia easier for everyone who wishes to invest in the country and called on investors from across the world to take advantage of the considerable business potential in Ethiopia.

Liberalization and privatization were major talking points in his speech. Abiy said his government was committed to opening up the economy to international investors in telecoms, logistics, energy, aviation, railways, and industrial parks. Abiy further said his government would continue to foster public-private partnerships.

In late February 2019, Abiy told the Financial Times that his “economic model is capitalism” and said Ethiopia aimed to complete a multibillion-dollar privatization of its telecoms sector followed by a sell-off of stakes in state energy, shipping and sugar companies. Ethio Telecom is one of the biggest internet and telephone service providers in Africa with over 60 million users. The partial privatization of Ethio Telecom is expected to open bids by Vodacom, Orange, and others.

Abiy’s pursuit of neoliberalism means the doctrine must be applied uniformly across the country including the Tigray region, which before its fall, maintained a strong preference for the developmental state and vehemently rejected attempts to impose free-market reforms. Debretsion Gebremichael, the deposed Tigrayan leader warned against the shift to neoliberalism stating that it would derail Ethiopia’s state-led economy. To pave the way for these changes, Abiy moved fast to purge key Tigrayan government and military officials at the helm of state-owned enterprises, replacing them with his appointees before embarking on a military offensive to enforce his rule in the rebellious Tigray.

Abiy’s move to overhaul the Chinese supported developmental state is largely driven by the West’s injection of financial aid to support his economic reforms. According to Politico, in December 2019 Ethiopia received a $9 billion aid package from the International Monetary Fund and the World Bank. The “influx of cash could upend 15 years of Chinese dominance and spark unprecedented interest from Europe and America,” investors, economists and political analysts say.

“The granting of this money sees the West countering China in a very tangible way, in one of the more politically and economically important and consequential countries in Africa,” said Zemedeneh Negatu, an Ethiopian American investor and global chairman of the Fairfax Africa Fund. The reforms are creating “opportunities for Western businesses to invest in Ethiopia,” even as they are altering Ethiopia’s relationship with China, noted Abdulmena Mohammed Hamza, an economist specializing in banking at the Edinburgh Business School.

There are indications that Abiy may go the full distance and ditch Chinese aid in favour of his newfound Western benefactors. Speaking at a conference in Addis Ababa, Abiy went as far as to say the terms of Chinese loans had damaged the Ethiopian economy.

“There are some that say we are adding more debt to the country’s already high debt. But borrowing from the IMF and the World Bank is like borrowing from one’s mother,” Abiy said.

“What hurt Ethiopia is borrowing from other companies or some countries. For instance, Ethiopia borrowed to build a railway but was asked to repay the debt before the completion of the construction,” he added, referring to the Chinese-backed railway line to Djibouti.

Neoliberalism and the new scramble for Ethiopia threatens to tear the restive nation apart. State formation in modern Ethiopia has always been rooted in economic systems that entrenched imperialism, and dictatorships that benefited state cronies at the expense of the masses. Since the days of Emperor Haile Selassie I, Ethiopia has transitioned from one regressive state model to another with the imperial state and its feudal tendencies a hallmark of the emperor’s reign (1930-1974), while Colonel Mengistu Haile Mariam’s Derg regime (1974-1991) created a pseudo-Marxist state that was equally oppressive. Likewise, Zenawi’s developmental state was an authoritarian system whose unprecedented economic growth only benefited the TPLF elite and did not trickle down to the impoverished masses. Ethiopia is now transitioning to a neoliberal state amid a fierce East-West geo-strategic competition that poses an existential threat to its sovereignty.

The only system that can work for Ethiopia and Africa at large is the establishment of a revolutionary, Pan-African, socialist state that can not only forge national unity and Pan-African identity, but end centuries-old imperialist driven, conflict-prone, socio-economic inequalities.

Ethiopia needs a third force, a movement that can mobilize the masses toward the establishment of a fully independent Pan-African state responsive to the needs of its impoverished peoples.

Featured image:  Members of the Ethiopian National Defense Forces stand in formation during a ceremony in Baidoa, Somalia, to mark the inclusion of Ethiopia into an African Union peacekeeping mission, January 22, 2014. Photo by Tobin Jones/Flickr.

A former Research Fellow at the York Centre for International and Security Studies (YCISS), Farid Abdulhamid is a long-time member of the Toronto Chapter of the Group for Research and Initiative for the Liberation of Africa (GRILA).