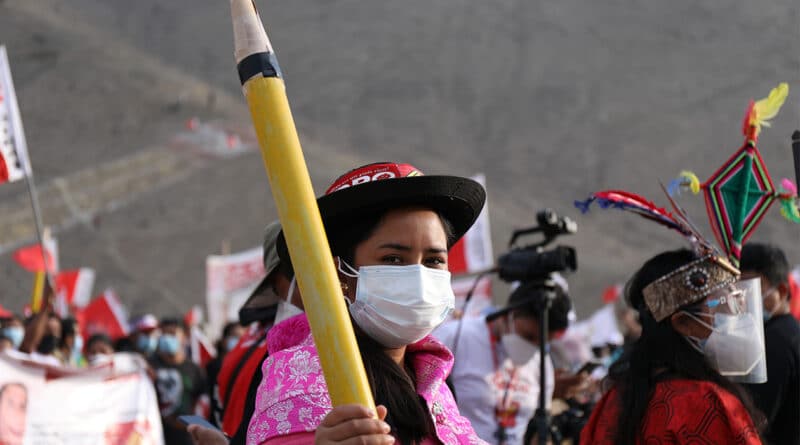 This last week was one of the most tense since Pedro Castillo became Peru’s president last May. The Congress, with a right-wing majority, is eager to disarm the executive branch so they can technically annul Castillo’s electoral triumph over the extreme-right candidate Keiko Fujimori.

For those who do not follow the South American country’s internal policies, this may seem like a last-minute move by right-wing sectors, but it is not. The coup was immediately set into motion once Castillo won the presidential runoff early this year.

The first step was to cast doubts over his electoral victory, and clearly and strongly divide the country over this issue. To do so, Keiko Fujimori spread accusations of systematic fraud in the polling stations where Castillo won, and filled the media with this argument to poison the public opinion against the leftist candidate. At the same time, she filed appeals to throw out 200,000 votes, mainly in impoverished rural areas, before the National Office of Electoral Processes (ONPE) to delay Castillo’s legal victory as long as possible. However, they could not succeed, which does not mean that they were not able to cause damage to the reputation of the recently elected president in the process.

The Perú Libre candidate began his term forming the new cabinet with a strong leftist presence, which unleashed the right’s powerful machinery made for politicians. The first one to fall was the Foreign Affairs Minister Héctor Béjar, an openly communist intellectual and politician. The media crucified him due to some statements he had made in which he reproached the CIA-trained National Navy for fostering terrorism in the country. Béjar stepped down in order to avoid problems for Castillo’s formation of a government, and was replaced by a traditional diplomat.

Next on the list were Labor Minister Iber Maravi and the Prime Minister Guido Bellido. Despite the parliamentary vote of confidence for Bellido’s cabinet in late August, the Congress continued to question him and some of his ministers for their past actions as leftist militants. Bellido and all the ministers had to resign after Castillo asked him to do so, evidently under pressure from the opposition, which was ready to place obstacles before every executive proposal in a Parliament where they were, and still are, the majority.

These actions were aimed to make the first days in office unbearable for Castillo—who also had to deal with the pandemic, an earthquake, and a wobbling economy. The president ended up by appointing a new cabinet with wider opposition participation, but this was not enough either, since the real objective was not to have more participation in the government, but to destroy it once inside. And they have certainly made some progress with all these maneuvers which have dynamited the relationship between the president and his party, Perú Libre .

As of today, the new cabinet has not received the parliamentary vote of confidence yet, and the opposition is about to disarm the president even more, by abrogating his right to dissolve the Congress if it repeatedly impedes his executive proposals. This right is known as “matter of confidence” in Peru, and it was created as the counterpart to the Congress’ ability to declare a presidential or ministerial “vacancy.” After losing the presidential elections, Parliament remains under the control of the right-wing forces, and they need to keep it that way to make the presidential vacancy happen and finish the coup d’état they started the minute they knew they lost the presidential election. Right-wing sectors are fearful that Castillo could use his “matter of confidence” prerogative to dissolve parliament, just as Martin Vizcarra did in September 2019 due to the Constitutional Court judge’s order. This is the reason why Congress passed a law reinterpreting the “matter of confidence” prerogative.

The new law limits the scope of the prerogative by reducing its application to general matters of government, which means that it cannot be summoned when constitutional reforms—or any other procedures or processes exclusively exercised by Congress—are on the floor. However, Castillo sent an appeal demanding the Constitutional Court declare the new law unconstitutional. According to the executive, the law transforms constitutional aspects; therefore, it should not be passed with less than two-thirds of the votes, something that was not taken into account by the head of Parliament and the right-wing congresswoman Maria del Carmen Alva. Moreover, the law breaks the balance of power between the Legislative and the Executive and violates Article 102 of the Constitution regarding the ability of Congress to reinterpret the Constitution, which is a matter concerning only the Constitutional Court.

At the same time, Congress sets apart the bills sent by the President, aiming to clarify the reasons for a presidential vacancy to be decreed. Castillo proposes to specify that it is only possible if “mental and/or physical disability” is duly certified by doctors. If this amendment is passed, Congress would not be able to move ahead with another legislative coup based on “moral disability,” as it did with Vizcarra just a month after he tried to dissolve the parliament. The bill was also intended to regulate motions of censure against ministers by limiting the causes to the time they have been in office.

Castillo knows that Congress is his Damocles’ sword and he is trying to shield his administration against attacks in this scenario, as has happened during these first months. But his chances of succeeding are limited. To dismiss the aforementioned law, five out of six of the Constitutional Court magistrates would need to accept the President’s demand, which seems difficult since they were elected by the same right-controlled Congress.

On the other hand, according to the website El Foco, there is a group pushing for the presidential vacancy called “Pisco Guild,” which is linked to the National Society of Industry (SNI). They seem to be led by former Foreign Trade Minister Jose Luis Silva Martinot, and have declared themselves ready “to pay for news and road cutbacks to bring the country to chaos and rid it of communism.” After all this, it is evident that a coup d’état is underway, even more so if we take into account the last call issued by Keiko Fujimori for protesters to march on October 26 under the slogan “Keiko won.”

Castillo’s struggle in Peru is not only about parties fighting for power seats, but rather the struggle of Latin America’s leftist movements in defense of democracy, which has been virtually kidnapped by the most powerful economic interests. The regional right has rehearsed this screenplay over and over again with some circumstantial changes whenever they lost a presidential election. After Fernando Lugo in Paraguay and Dilma Rousseff in Brazil, Castillo is just one more leader in the coup lab of the regional right sectors.

“And last but not least, to give the final tune up to this project, you have to throw in some charges of corruption or abuse of power,” according to the recipe.