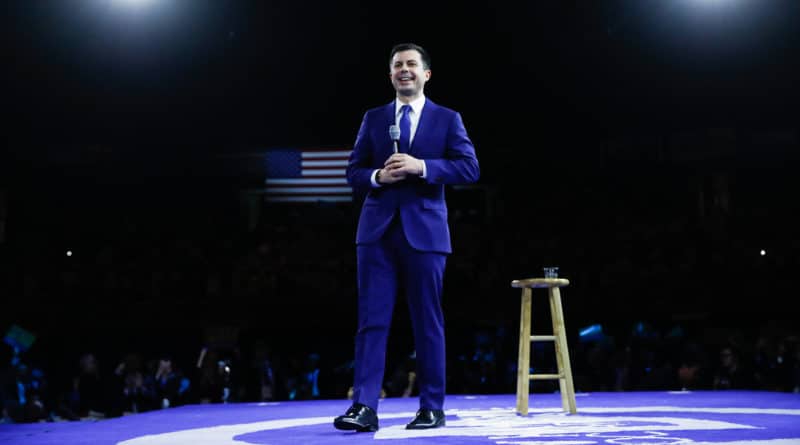 Pete Buttigieg has promised to “put an end to endless wars,” but there are reasons to suspect a Buttigieg presidency would not be as pacifist as his pronouncement implies.

Former South Bend mayor Pete Buttigieg has developed a habit of putting out clever, catchy phrases as part of his bid to win the Democratic presidential nomination. On Friday he released an image of himself reading, “The shape of our democracy is the issue that affects every other issue,” something that was immediately panned by his detractors. Former Democratic candidate Marianne Williamson remarked, “If I had said it, there’d be jokes about my being on acid. And I would never have said it.” Unconcerned by his critics, this weekend Buttigieg was at it again, claiming that, “I will put an end to endless wars.”

With the statement, the Harvard graduate attempted to channel the widespread American fatigue with conflicts started during the Bush administration, using a phrase often associated with the antiwar movement. However, there are reasons to suspect a Buttigieg presidency would not be as pacifist as the pronouncement implies. International relations are not a leading feature of Mayor Pete’s presidential bid; his campaign website’s foreign policy section features only five sentences, where he again states it is “time to put an end to endless wars” but also that we must “restore American credibility” on the world stage. The phrase “restoring credibility” is an ominous one for those with long memories, as it was exactly the justification NATO used in bombing Yugoslavia in 1998; President Clinton announcing that failure to follow through with threats would “discredit NATO.” “Our mission is clear, to demonstrate the seriousness of NATO’s purpose,” he said. British Prime Minister Tony Blair echoed Clinton’s sentiments claiming that to draw back from bombing Yugoslavia would “destroy NATO’s credibility.”

Furthermore, when interviewed by The New York Times on foreign policy, the former South Bend mayor gave many answers that appear at odds with a more dovish America he suggests he would lead. When asked if he would potentially use force for humanitarian intervention or to pre-emptively combat Iran or North Korea, he simply responded “yes.” Furthermore, he said he would not agree to remove American troops from the Korean peninsula. U.S. forces have occupied the South since 1945 and participated in a bloody civil war that saw up to a quarter of the population wiped out. Buttigieg also opposed the idea of moving the American embassy in Jerusalem back to Tel Aviv. He also did not answer the question if he saw himself ordering U.S. troops to kill or remove foreign leaders, not a difficult question to answer for someone skeptical of war.

Perhaps most at odds with his apparent anti-war stance is Buttigieg’s grand vision for the return of the military draft. “Our intention is for this proposal to create a pathway towards a universal, national expectation of service for all 4 million high school graduates every year,” his campaign website proclaims. While insisting it would be “strictly optional,” it also states that, “we hope service becomes so common that the first question asked of every college freshman or new hire is: ‘where did you serve?’”

While in the army and working for the McKinsey Corporation, Buttigieg worked alongside the C.I.A. He has also garnered widespread support and endorsement among the national security and intelligence community, adding further fuel to the theories that he is an asset. In December, over 200 foreign policy and national security professionals endorsed him en masse. Among those were former Secretary of the Army Eric Fanning, former deputy CIA director David S. Cohen and former Assistant Secretary of State Philip Gordon.

After a strong showing at the Iowa caucus, Mayor Pete has emerged as a potential frontrunner in the race for the Democratic nomination. While Sanders received more votes and is projected as the favorite in virtually every state, his support was more localized in urban locations like university towns whereas Buttigieg’s was more evenly spread. However, there is also considerable hostility towards him from some quarters. During the New Hampshire Democratic debate last Friday, both Sanders and Andrew Yang used the phrase “nibble at the edges” when discussing Buttigieg, which many took as an allusion to his online depiction as a dishonest rat. Thus, while Buttigieg rhetorically opposes endless wars, his history of militarism will mean it will take more than a few screenshots to convince those skeptics that he represents a genuine break with the past.