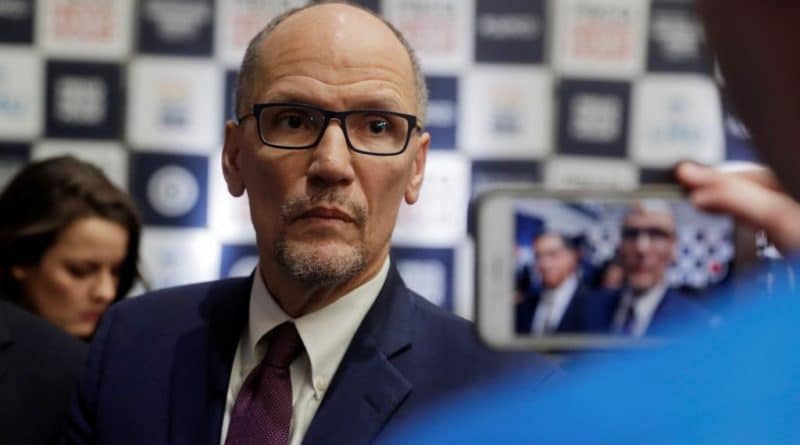 He represents an establishment that has put its own position in the party above the party’s success. It’s time to go.

Tom Perez should never have been DNC chair. He was used as part of a proxy war between Barack Obama’s faction of the establishment and the rest of the party, which was fully ready to move on after the 2016 mess. Both Harry Reid and Chuck Schumer had embraced Keith Ellison, one of Bernie Sanders’s top surrogates in 2016, for the position, a show of unity that might have helped rebuild broken bonds within the party. Just as Howard Dean’s elevation to DNC chair in 2005 brought insurgents within a broader circle of power, Ellison’s victory would have at least attempted a rough union between the Sanders and Clinton forces, and given the party’s left wing more of a shot at creating a strong and legitimate message to counter Donald Trump.

Obama couldn’t handle it. He pressured Perez, who was musing about running for governor in Maryland, into the race, and bore down on the establishment to break with the Ellison unity shtick and accept his preferred candidate. This eventually succeeded, with the help of a party coup in Puerto Rico that delivered Perez all of that delegation’s votes.

Obama, now a movie studio boss and occasional public speaker, had no personal reason to force Perez on the party. The most logical reading of his rationale would be that he did it for the blob, the network of consultants, strategists, pollsters, lobbyists, policy mandarins, and media figures for whom politics is their business. They didn’t want the spigot to close on the hundreds of millions of dollars that flow through campaigns, and they needed to eliminate the threat of a gatekeeper like Ellison, who might have different ideas. So Perez was installed.

The disastrous past week of Democratic politics is the result, deeply damaging the perceived competence of a party that is attempting to ask the American people to put them back in power to engage in activist government. The Iowa results weren’t just one snafu but part of a pattern of self-dealing and stupidity within a party elite that’s more concerned with staying in power than taking power. And so, for the second straight cycle, like Debbie Wasserman Schultz, a DNC chair needs to step down before the end of their term. Tom Perez must go.

Iowa is instructive for more reasons than the failure of an app to deliver results. Thanks to the Unity Commission, the DNC did make serious progress in rolling back caucuses (which now only occur in four states), and pushed to increase access in those that remained. But Iowa stuck to its traditional format despite these reforms, adding a so-called “virtual” caucus to grant the right to vote to those who couldn’t physically attend on caucus day. The DNC allowed Iowa to create the technology so non-attendees could cast their votes over the phone, and gave this innovation a preliminary green light in July. By the end of August, however, the DNC shut it down over security concerns.

Incredibly, Iowa then did not eliminate the caucuses, defying a DNC rule that requires states to enable voter participation for those who cannot attend. The DNC couldn’t kill the caucus because of New Hampshire’s insistence on being the first in the nation for primary balloting, scheduled for one week after Iowa. So to maintain New Hampshire’s gravy train, Perez had to maintain Iowa’s.

This weakness continued with the abominable Shadow app, which the DNC effectively if indirectly approved by recommending against having caucus administrators call in their results over the phone. As we now know, the app was an epic grift from a cast of well-connected Democratic operatives, the very kind Tom Perez was installed to maintain in the higher echelons of the party. It was part of a push to “beat” Republicans on tech, matching buzzwords like “disrupt!” with outsourcing to operatives who can skim lots of dollars off the top.

Shadow wasn’t tested, wasn’t coded properly, wasn’t set up in time for most organizers to install it, and in short, didn’t work. Worse, the new transparency placed on the caucus process (which reported actual vote counts for the first time) exposed numerous tabulation errors that were easily exposed by Twitter sleuths. These errors were probably a feature of every Iowa caucus since the 1970s, but we only now had the data to actually see it. Still, the delegate vote was nearing a conclusion that jibed with the popular vote, thanks to Bernie Sanders’s prowess in the satellite caucuses, flexible voting sites for those who couldn’t otherwise participate—the one access-boosting innovation that remained.

The Iowa results weren’t just one snafu but part of a pattern of self-dealing and stupidity within a party elite that’s more concerned with staying in power than taking power.

It’s at this point that Perez called for a “recanvass” to count the votes again in Iowa. Waiting until the moment Sanders was poised to take the lead to demand a recount set the conspiracy-minded reeling, and with good reason. It was also Perez’s dumb attempt at self-preservation. Perez never coordinated with the Iowa Democratic Party over this demand, and under caucus rules has no authority to do so. Authority notwithstanding, CNN’s Jeff Zeleny has reported that the DNC “has been running the show in Iowa for the last 48 hours.”

RELATED CONTENT: The Myth of Incompetence: DNC Scandals are a Feature, Not a Bug

So Perez is seeking to be an independent actor trying to “clean up” the Iowa mess, when he was fully implicated in making the mess in the first place. Moreover, Perez’s recanvass request apparently came because of differing and contradictory rules over how to count the aforementioned satellite caucuses. That there would be this much confusion over the counting process can only fall, yet again, on the head of the leader of the DNC, which approved the delegate plans for all the states.

Because the outcome in Iowa predictably pits the left-wing and moderate factions of the party against one another, recriminations of vote-rigging and treachery have ensued, fracturing an already divided party at the very moment it requires unity. That also must be laid at Perez’s feet. His very presence is a testament to an establishment that refused to relinquish its grip on power, despite the catastrophe of 2016. It has presided over a mess in Iowa that threatens to define the party as thoroughly hapless.

Perhaps the most damning example of the establishment looking out for itself was revealed last month, when Buzzfeed reported that the DNC had secretly approved golden parachutes for Perez and two top lieutenants. Once the story leaked, Perez had to set those parachutes adrift. But the incident made clear Perez’s real fallback plan in case Bernie Sanders won the nomination: getting paid.

Now that the special payout has been extinguished, the DNC can happily say goodbye to Perez without incurring additional financial costs. This is no longer optional after Iowa: I don’t see how the eventual nominee can do better than limp along with Perez, and more importantly what he represents, at the helm, given the complete lack of confidence that Perez now inspires among the millions of volunteers the Democrats will need this fall. This critical election already has a Republican standard-bearer defined by self-enrichment and ineptitude. The Democrats must purge their counterpart.

David Dayen is the executive editor of The American Prospect. His work has appeared in The Intercept, The New Republic, HuffPost, The Washington Post, the Los Angeles Times, and more.