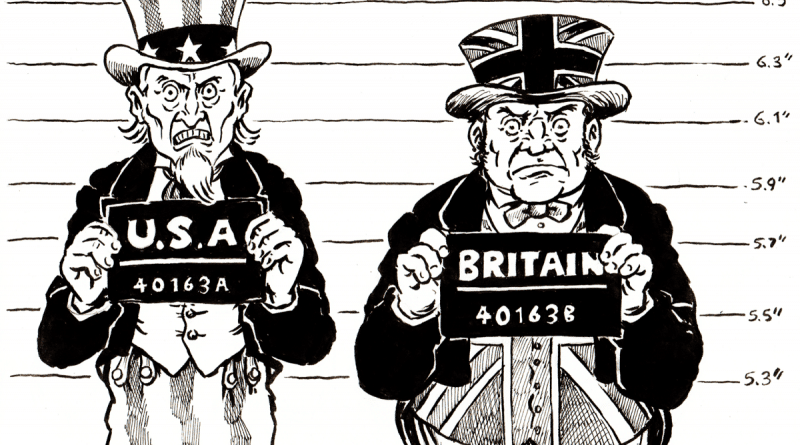 So what is Imperialism ? Well my definition would start with 600,000 dead Iraqi babies 40,000 dead Venezuelans The destruction of Afghanistan and Libya the military coup in Egypt and the fascist coup in the Ukraine

To view imperialism we must define its characteristics and goals

Modern 21 st century imperialism is trying to create a unipolar world where capitalism,the pursuit of profit and the enslavement of Sovereign nations and peoples are but a by product of world domination.

Those who seek to impose this new world order on the rest of humanity do so in the name of trans global corporations ,trans global finance, trans global oligarchs ,in the interest of the capitalists who owe no allegiance to countries or states but to the global class of the elite, using the industrial military complex and the profits gained from war and resource exploitation of conquered or vassal states, with which ,they intend to further gorge themselves on the wealth of humanity against the interests of the world population so the few may live in utopia while many live and die on the streets .

In order for the elite in this trans global international class to preserve ,protect and build on what they have gained and stolen from everyone else through the endless war on terror, which in reality is an endless war of terror by the United States and others will last unfortunately for the foreseeable future while they strive to conquer cajole bully and threaten the rest of us into submission.

We are witnessing today what is simply the eternal battle between good and evil, rich and poor, the have and the have nots, the feudal barons and the kings

The more things change the more they stay the same.

From the gunboat diplomacy of the 18th and 19th century we now have siege ,sanctions, military and financial interventions , trade embargoes and where necessary assassinations ,murders, boots on the ground and show trials Gaddafi and Hussein being recent examples.

So what is happening in today’s modern world.

It appears that those countries which want to remain sovereign independent and opposed to this new uni polar world order and those who peoples have endorsed and elected socialist governments continue to be selected for regime change programs initiated by the CIA instructed by their government and others under the auspices of humanitarian aid or interventions to bring about stability, an end to a despotic regime, bringing democracy American style, with American values and customs and western imposed dress and traditions ,to free the people .

In reality they impose war, austerity foreign financial institutions, the free market,unregulated capitalism,indebtedness to the foreign banks and the International Monetary Fund.

The weapons of war

So how is this achieved

Well here is a well used template which starts with fomenting internal dissent in the targeted countries.

So we have destabilization techniques such as mobilized street protests many times foreign directed and financed which build in scale and turn from peaceful from violent .

They become armed and attack the state structures and institutions resulting in counter violence from the state which is then portrayed as brutal ruthless state re[repression which must be challenged.

Examples are protests in Midan square in the Ukraine financed by America against a democratically elected government were protesters were shot and killed by agent provocateurs in the crowd leading to further violence culminating in a fascist led coup ousting the elected government and replacing it with people who hung huge portraits of a Nazi collaborator Banderos from the Parliamentary building ,which in turn encouraged the attacks in Odessa targeting workers and trade unionists in a building which fascists set alight killing many leading to Lugansk and Donetsk seceding from Ukraine and setting up their independent states in the Donbas.

In Venezuela the socialist governments of Chavez and now Maduro overwhelmingly and democratically elected by the people are trying to progress their social reform agendas to the benefit of their people, are under prolonged and continuous financial siege from America ,Europe and increasing pro right wing governments in Latin America and the Caribbean.

The social program which has built more than 2 million public housing units to include schools and medical clinics are a stunning testament to what can be achieved when the wealth of the nation is invested in the infrastructure and the people not the banks and the elite.

The envy of the modern world, now under neoliberal attack from successive conservative governments education is no longer free for university students parents and charities are subsidizing secondary and even primary education and heath now is a two tiered system were under investment leads to chronic waiting lists ,which lead to waiting list initiatives, which lead to outsourcing medical contracts thus depriving the health service of much needed funds.

While parts of western governments embrace neo liberal austerity to further enrich the wealthy they want to impose these draconian measures on countries such as Venezuela which are trying to eradicate poverty illiteracy rates ,slum housing and create welfare pensions and decent lives for its peoples

The response from America and the West is frozen assets, the theft of monies by Western neoliberal governments to the benefit of those government and the detriment of the people of Venezuela

Examples of these financial sieges can be found against China Russia Iran Venezuela North Korea and the Donbas regions.

The attempt destruction and or balkanization of Syria was a proxy war fomented by the west to strengthen Israel, to weaken Syria and by extension Lebanon Iran and finally Russia .

Isis was created or co opted in my view opinion by the west as a proxy in many cases sectarian army with one goal the destruction of a strong secular Syria ,the confessional State of Lebanon then Iran and perhaps through aggression in Chechnya the further isolation and marginalization of Russia.

Hezbollah,along with the Iranian National Forces and Russian Military ,are all in Syria in order to preserve their own State structures going forward ,by halting Zionist American British and French machinations in destroying or subjugating their countries.
America may claim to be leaving Syria in reality its is redeploying around the oil fields as I speak

In essence what I am saying is the old world order of empires, wars, military interventions , siege ,trade wars embargoes coups proxy sectarian wars divide and conquer boots on the ground and the racism intolerance murder torture and brutality that goes with it from the 18 19th centuries has not gone away .

It has simply changed its clothes and tactics, the accent from European to American ,the elite are the same the poor are the same and the poor continue to die and be killed for the enrichment of the elite.

RELATED CONTENT: Differences Between an Attempted Coup D’état and a Popular Civic Insurrection

The biggest war in the west is not physical its electronic.

Its the propaganda of weapons of mass destruction In Iraq its 9-11 in Afghanistan its Assad killing his own people, its Babies taken out of warm incubators in Kuwait by Iraqi soldiers and left to die on the cold floors

A story told the American Congress by a very believable young Kuwaiti volunteer nurse, which led Congress to approve the war on Iraq.

Turns out she was the daughter of the Kuwaiti ambassador to America and the UN.

So the media creates a narrative, a compelling story line for regime change, mainly false, like the discredited white helmets founded by British ex soldier John le Mesuier ,the Western governments encourage street protests which they have some control over via the leadership of the protests ,siege, financial embargoes trade wars and coups are their tried and trusted methods to achieve their aims.

Our media and many non governmental organizations are complicit in the deceit and lies that are used to pre program our consent for these wars.

I mentioned Syria Lugansk and Venezuela in my talk .I did this because i have visited all three of these countries between May and September this year

The murders in Odessa coalesced their minds back to the second world war when 26 million Russians died at the hands of these fascists and they were determined to prevent anymore Odessa type massacres.

They too speak of peace and a desire to allow their democratically elected government to reinvest the wealth of the nation in the infrastructure and in the people in raising health ,wealth and literacy of the people.

They cannot understand why the West says a non elected Guido should be declared President when they have a democratically Leader in Maduro and for that matter neither do i.

In Syria where I attended the World Federation of Trade Union conference with leaders of Lebanese Trade Unions Libyan pilots ,South African ex political prisoners, representatives of State and Trade Union structures from Africa and the Middle East to include Senegal, Palestine Iran and North Korea during a two day conference

The people again expressed support for the wish to live in peace for all foreign interventionists from Turkey to America Britain Israel Saudi Arabia and the Gulf States to allow the Syrian people to negotiate their own future to live in peace with each other and their neighbors and the wider region.

In all three countries that i visited this year the underlying theme was foreign inspired, financed, directed and controlled aggression aimed at the state to divide the people through siege, through proxy war boots on the ground coups and sanctions

And who is leading this America Israel and the Eu

The real terrorists are not in Bora Bora they are in Whitehall Washington and Tel Aviv.

How do we know this because thanks to the courage of Julian Assange and Chelsea Manning we have transcripts, we have collateral damage videos and we have emails

We have Hillary Clinton, We came, We saw He died accompanied with demonic victorious laughter at the death of Muamar Gadaffi

We will have peace when we have justice

I say no to war ,no to regime change operations, no to sieges, no to financial or military interventions,no to apartheid Israel ,and No to the Extradition of Julian Assange

Freedom of the press is paramount and freedom of Julian Assange ,Chelsea Manning and many others is essential in a free word

Finally it is important not to confuse regime change operations which are state sponsored from organic protests by the people which are legitimate.

National wars of liberation and resistance against foreign illegal occupation as with the Apartheid Israeli OCCUPATION OF THE PALESTINIAN WEST BANK ARE JUSTIFIED AND ENSHRINED IN INTERNATIONAL LAW.
THE INDIGENOUS PROTESTS IN ECUADOR AGAINST NEO LIBERALISM THAT HAS DOUBLE THE PRICE OF DIESEL AND INCREASED THE PRICE OF GAS LEADING TO ECONOMIC HARDSHIP FOR THE MOST VULNERABLE IS JUSTIFIED

THE YELLOW VEST NON VIOLENT MOVEMENT IN FRANCE IS JUSTIFIED

WE MUST END WARS, LIVE IN PEACE AND STOP IMPERIALIST INTERVENTIONS FOR PROFIT
WE MUST FREE JULIAN ASSANGE AND CHELSEA MANNING.

IN THE END IT IS NOT THE WORDS OF OUR ENEMIES BUT THE SILENCE OF OUR FRIENDS THAT WILL DEFEAT US!