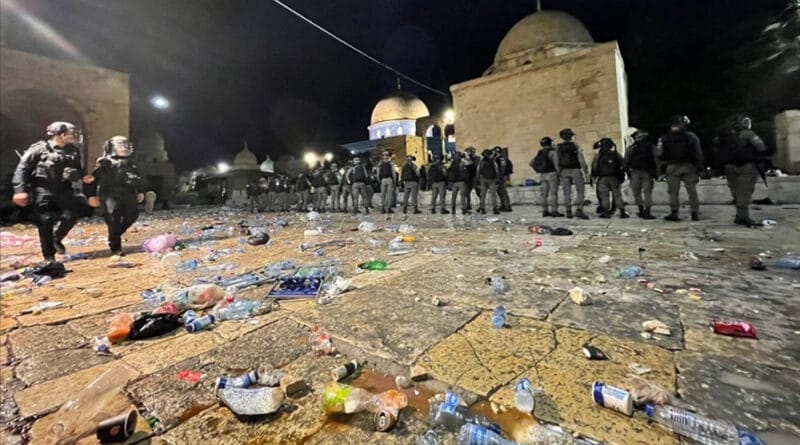 The European Union (EU) has called for de-escalating the alarming situation in East Jerusalem al-Quds and the al-Aqsa Mosque after Israeli forces brutally raided Palestinian worshipers at the holy mosque compound.

In a statement on Saturday, the European bloc warned that tensions and violence in the occupied West Bank, particularly in East Jerusalem al-Quds, have dangerously surged over the past days.

“The European Union calls on the authorities to act urgently to de-escalate the current tensions in Jerusalem [al-Quds],” said Peter Stano, the European Commission’s chief spokesman on foreign affairs, stressing, “[T]he status quo has to be respected.”

His comments came after the Israeli police raid of al-Aqsa Mosque Compound, also known as al-Haram Al-Sharif, on Friday night. More than 200 Palestinians were injured as Israeli forces fired rubber bullets, tear gas, and stun grenades at hundreds of Palestinians attending night prayers at the compound.

Dozens of worshipers were also arrested by the occupation forces, according to Wafa news agency.

The clashes took place on International Quds Day, the last Friday of the holy Muslim fasting month of Ramadan.

Every year, the occasion falls on the last Friday of the holy Muslim fasting month of Ramadan. It has been so named by the late founder of the Islamic Republic in Iran, Imam Khomeini. He has obliged Muslims around the world to rise in demonstration on the occasion in support of the Palestinian cause of liberation from Israeli occupation and aggression.

“Violence and incitement are unacceptable and the perpetrators on all sides must be held accountable,” Stano further said, adding, “Political, religious and community leaders on all sides should show restraint and responsibility and make every effort to calm down this volatile situation.”

The forced eviction of Palestinians by Israeli authorities from Sheikh Jarrah neighborhood in the East Jerusalem al-Quds also infuriated Palestinians, prompting them to hold protest rallies against the move.

Israeli forces have been demolishing Palestinian homes and structures in the Sheikh Jarrah neighborhood for the construction of a new settlement outpost.

Some 28 Palestinian families face the threat of forceful eviction from the neighborhood.

“The situation with regard to the evictions of Palestinian families in Sheikh Jarrah and other areas of East Jerusalem is also of serious concern. Such actions are illegal under international humanitarian law and only serve to fuel tensions on the ground,” the European Commission’s chief spokesman further said.

Since 2001, the European Union has repeatedly called on the Israeli regime to end all settlement activity and to dismantle the already existing ones.

Israel occupied East Jerusalem al-Quds, the West Bank, and the Gaza Strip during the Six-Day War in 1967. It later had to withdraw from Gaza but has been occupying the other territories since.

Featured image:  Israeli forces are seen as they enter Al-Aqsa Mosque in Jerusalem al-Quds, May 7, 2021. (Photo by Anadolu Agency)