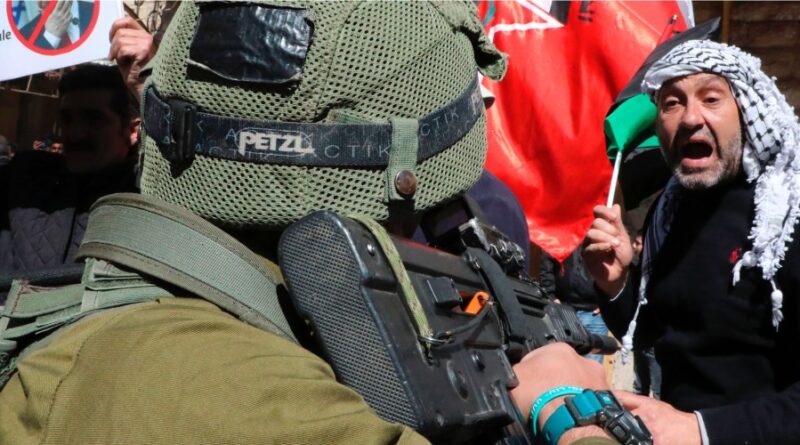 “The United States cannot turn its back on the atrocities, including war crimes, enabled by U.S. policies, particularly its decadeslong policy of shielding Israel from accountability.”

Less than a week after Human Rights Watch published a scathing report accusing the Israeli government of the crimes against humanity of apartheid and persecution for its treatment of Palestinians, a leading U.S. legal advocacy group on Monday submitted a memorandum to the Biden administration outlining the legal basis for reversing Trump-era pro-Israel policies that violate human rights and international law.

“It has long been obvious to anyone paying attention that U.S. policy on Palestine and Israel does not match its rhetoric nor the ideals that it claims to stand for—freedom, human rights, and democracy.”
—NLG

The memo (pdf), authored by the National Lawyers Guild (NLG) International Committee’s Palestine Subcommittee, notes that after four years of “bullish and detrimental” U.S. policy on Palestine and Israel under the Trump administration, “the health, human rights, and humanitarian situation for Palestinians—both in Palestine and in the refugee camps of surrounding countries—is dire.”

“From withdrawing vital funding from humanitarian organizations that provide basic needs to Palestinian refugees and moving the U.S. Embassy to Jerusalem, to targeting human rights advocates in the United States, the Trump administration enacted a number of policies that have harmed both Palestinians and U.S. citizens, and continue to do so today,” the memo states.

🗣️“Rescinding Trump’s recognition of Israel’s annexations should have been done on day 1 of the Biden administration." —@huwaidaarraf

This @NLGIC memo released today lays out the legal basis for immediate reversal of Trump policies on Palestine/Israel: https://t.co/wg3XnAPDYL

The memo’s authors urge the Biden administration to take steps including, but not limited to:

• Relocate the U.S. Embassy from Jerusalem to Tel Aviv;
• Reverse the Trump administration’s repudiation of a 1978 State Department legal opinion declaring Israel’s settler colonies in the occupied West Bank to be illegal;
• Rescind the previous administration’s rule requiring “Made in Israel” labeling on goods produces in the unlawful settlements, as well as former President Donald Trump’s formal recognition of Israel’s illegal annexation of Syria’s Golan Heights;
• Reinstate aid to the United Nations Relief and Works Agency;
• Call for an immediate end to Israel’s 15-year closure and blockade of Gaza;
• Refrain from further interference in International Criminal Court proceedings and consider ratifying the Rome Statute;
• Reverse Trump’s order falsely conflating criticism of Israel with anti-Semitism; and
• Affirm that boycotts for human rights such as the Boycott, Divestment, and Sanctions (BDS) movement “are a form of highly protected speech under the U.S. Constitution.”

“The policy recommendations made herein represent the minimum required to reverse the damage done by the Trump administration and begin to bring United States policy and practice on Palestine and Israel in line with international law,” the memo states. “The United States cannot turn its back on the atrocities, including war crimes, enabled by U.S. policies, particularly its decadeslong policy of shielding Israel from accountability.”

“Thus, the United States has a legal and moral responsibility to act expeditiously,” the memo adds. “It has long been obvious to anyone paying attention that U.S. policy on Palestine and Israel does not match its rhetoric nor the ideals that it claims to stand for—freedom, human rights, and democracy. The Biden administration has an opportunity and an obligation to correct course and to pursue policies grounded in integrity, human rights, equality, and respect for the rule of law.”

“Rescinding Trump’s recognition of Israel’s annexations should have been done on day one of the Biden administration.”
—Huwaida Arraf, NLG

Memo co-author Huwaida Arraf, a human rights attorney and co-chair of the NLG International Palestine Subcommittee, said in a statement that “rescinding Trump’s recognition of Israel’s annexations should have been done on day one of the Biden administration, and although [President Joe] Biden has stated that he would not relocate the U.S. Embassy from Jerusalem back to Tel Aviv, this position cannot be reconciled with a stated intent to ‘respect the rule of law.'”

As the restoration of $235 million in U.S. aid to Palestinians earlier this month demonstrated, the Biden administration is expected to place more emphasis on Palestinian human rights than its predecessor. However, unconditional U.S. military aid to Israel—currently about $3.8 billion per year—continues despite human rights advocates accusing its government and military of crimes including illegal occupation and settler colonization, apartheid, ethnic cleansing, and genocidal policies and actions.