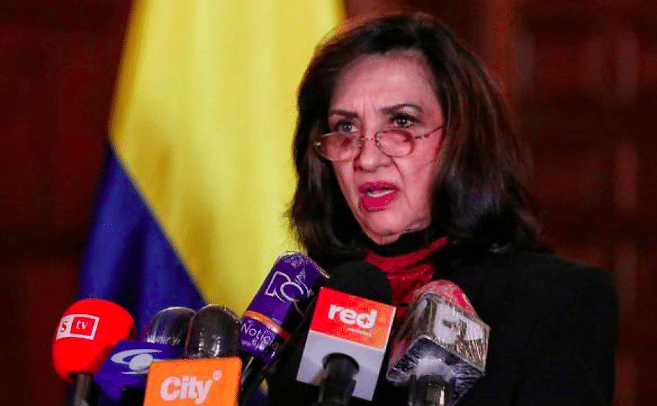 This Sunday, May 9, the resignation of Colombia’s Minister of Foreign Affairs Claudia Blum was announced, the second resignation from Iván Duque’s cabinet in the last two weeks.

Blum’s departure reinforces the view that things are not only going wrong in the country, but in the government as well, due to the human rights crisis created by a brutal response of President Iván Duque to the national strike, and due to his incapacity to negotiate a tax reform.

The proposed bill would have proved most damaging to the vulnerable sectors of Colombia’s population. The original requests of the National Strike Committee, demonstrators and social movements have now transformed into greater demands based on the human rights failings of the extreme right-government of Colombia.

According to local media, the former foreign minister met with the president on Friday, and Duque had questioned her effectiveness as the protests unfolded.

Within 12 days, the image of Colombia as a repressive nation where the neoliberal shock doctrine has resulted in acute social dissatisfaction, met with brutal repression, has reached screens worldwide.

Claudia Blum was a shadowy minister in the government who, during the protests, found herself in charge of reinforcing claims of subversive interference of guerrilla groups and foreign agents in the uprising.

She did not do much to save face for Colombia, a country that has seen its reputation hit a new low, internally and internationally.

On Saturday, the Institute for Peace Studies (INDEPAZ) and the NGO Temblores reported that, following 11 days of massive mobilizations in the main cities of Colombia against the neoliberal policies of President Iván Duque, at least 47 people had lost their lives. At least 39 of these deaths were by the hand of the repressive agents of the ESMAD riot police and the Army.

In addition, they denounced that, since the start of the national strike on April 28, there have been 963 arbitrary arrests, 12 cases of sexual violence, 548 disappeared, 28 victims of eye injuries, 278 assaults by the police, and 1,876 violent incidents.

A diplomat without diplomacy
Instead of practicing diplomacy, Blum dedicated herself to posting messages on Twitter to discredit opposition politicians such as Gustavo Petro, whom she tried to frame as a leader unpopular with his own followers and opposed to the demonstrations.

Blum’s resignation follows the resignation of Finance Minister Alberto Carrasquilla and his vice minister. These two were the architects of the tax reform which ignited the spark of social dissatisfaction that mobilized millions of Colombians, resulting in  the bloody repression by Duque’s security apparatus.

The Colombian media outlet Semana commented on Blum’s departure from the Ministry in discourteous terms. The news outlet said that the former head of foreign affairs “almost never knew what diplomacy was about,” and “had become one of the least qualified officials in La Casa de Nariño [seat of the presidency], with little connection to the cabinet and public opinion.”