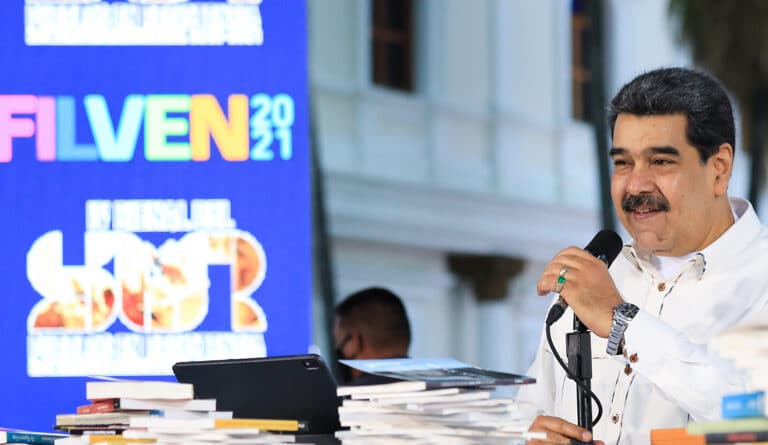 Thursday, November 4, the President of Venezuela, Nicolás Maduro, announced that during the 17th Venezuelan International Book Fair (FILVEN), 100 new books will be launched and issued to readers. President Maduro made the statements during the inauguration of FILVEN 2021, which takes place this year at the Federal Legislative Palace in Caracas, headquarters of the National Assembly.

“100 books will be christened within the framework of FILVEN 2021,” said President Maduro from the National Assembly, “and we are going to deliver them to the people, to the readers, so that they can come to refresh their reading lists.”

The head of state stressed that the soul of the people of Vietnam and the people of Venezuela will be shared at the International Book Fair: “Heroic Vietnam, our sister!” stated the president while conducting a tour of Venezuela’s architectural heritage spaces.

The event will welcome the participation of 134 writers, including 100 Venezuelan nationals and 34 from other countries, in some 800 activities scheduled in person and online.

In addition, Minister for Culture, Ernesto Villegas, indicated that they will also exhibit plastic and art works inside the Federal Legislative Palace.

Likewise, FILVEN will be projecting 50 works on the windows of the palace so that “passers-by and users of the Caracas Metro can observe them.”

For face-to-face activities, the “traffic light” system for COVID-19 safety will be used, Minister Villegas stressed, referring to the smartphone system designed to prioritize public places for those people identified as vaccinated by the Patria platform.

There will be 10 continuous days of the fair, with an average of 80 events per day such as seminars, symposia, and the delivery of the 2021 Rómulo Gallegos Award.

The honored writers for FILVEN 2021 are José Vicente Rangel and Vladimir Acosta. The Socialist Republic of Vietnam attends the 2021 edition as guest of honor.

Carabobo, freedom roads
The President reported that on Monday, November 15, the television series Carabobo, Caminos de Libertad will be released, commemorating the 200-year anniversary of the historic Battle of Carabobo.

This is the first season of the series, which President Maduro assured is an example of the highest level of cinematography. The production is directed by Luis Alberto Lamata, and recreates the events that took place around the final battle that liberated Venezuela.