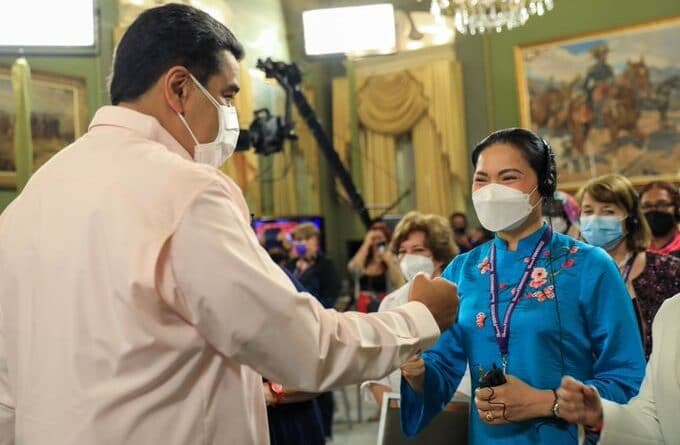 The 17th Congress of the International Democratic Federation of Women (FDIM), held during April 27-30 in Caracas, Venezuela, ended on Saturday, April 30. As part of the activities of the closing ceremony, FDIM presented its feminist work agenda in a meeting with the Venezuelan Minister for Women, Diva Guzmán; Vice President Delcy Rodríguez; and President Nicolás Maduro at Miraflores Palace.

Lorena Peña, the current president of FDIM, gave a presentation of the resolutions approved during the international congress. She highlighted the challenges faced by women in their struggle against patriarchy and imperialism.

Peña explained the organization’s four main axes of work or focus: the role of the FDIM and its challenges, the impact of the pandemic on the lives of women, human rights of women, and the fight against inequalities in health, work, maternity and against capitalism.

Relaunching an offensive against war, fascism and inequality is one of the organizational challenges pointed out by the FDIM. Another is training and promotion of women and the renewal of leadership.

Peña added that another goal of FDIM is to adapt the organization’s message, content and ideas through mass media tools and other technological resources at hand.

FDIM will also establish national and regional alliances for feminist struggles, announced Peña. Regarding the impact of the pandemic on the lives of women, the FDIM Congress concluded that it has been proven once again that capitalism is a system incapable of preserving life.

The Federation recognized that women have been the hardest hit by the COVID-19 pandemic as they have been typically assigned with carework; and when working as doctors and nurses, they represent the largest number of deaths from the pandemic.

The FDIM is also focused on creating a specific work agenda for young women, rejecting the neoliberal precariousness of public services.

RELATED CONTENT: Venezuela Hosts Fourth Summit Against Fascism, an Ideology that Has Not Died

During the days of the Congress, a number of debates were held on the human rights of women, the rights of LGBTIQ+ people, women with disabilities, and indigenous peoples.

The Congress also discussed feminicide, criminalization, discrimination and other inequalities in health, labor, motherhood, and capitalism. The FDIM proposed to promote labor movements and to transform the hardships of women in war contexts, as well as discrimination in the workplace and to guarantee women’s sexual rights.

Acknowledging that the meeting took place at a very critical moment on the global level, Peña pointed out the resurgence of wars in the world, and the pressure from NATO.

“We are feminists of the left,” said Peña, who also reflected on the need to care for and fight to preserve the interests of women, since in times of war women’s rights are forgotten.

“The Congress of Venezuelan Women has put forward practical proposals for the strengthening policies of protection for women and their rights, and the fight against violence and discrimination,” said President Nicolás Maduro, while felicitating the Congress. He exhorted those present to “communicate the truth about Venezuela, its essence, its sensitivity to the world, and the women of the world can count on the support of Venezuela in their fight for the rights of women.”

The Venezuelan Minister for Women, Diva Guzmán, congratulated the FDIM for a successful international forum, and said that the organization is “a revolutionary, feminist and fighter federation” comprised of “class sisters.”

FDIM declared its solidarity for the peoples of Latin America and the Caribbean, afrodescendant and indigenous peoples who are victims of racism, victims of terrorism, and advocated the dissolution of NATO and establishment of world peace.