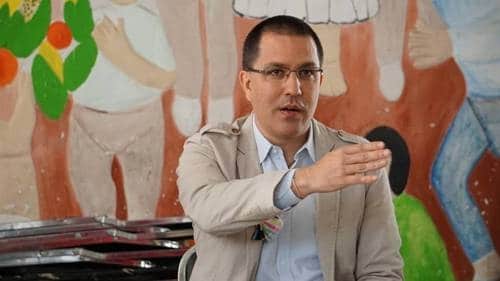 The Venezuelan Foreign Minister, Jorge Arreaza, has dedicated the last four years of his life to weathering the worst diplomatic crisis his country has suffered in decades. During that time he has faced the trade blockade, the confiscation of strategic companies and deposits abroad, and the recognition of the parallel government of Juan Guaidó by Washington and the European Union.

In an interview with La Jornada, the Minister of People’s Power for Foreign Relations of the Bolivarian Republic of Venezuela, who was in Mexico City to participate in the twenty-first Meeting of Foreign Ministers of the Community of Latin American and Caribbean States (CELAC), indicated that Joe Biden’s administration seems to recognize that his country defeated coup attempts and mercenary operations, and has decreased pressures against it.

What the United States has done to harm Venezuela goes—the Chancellor pointed out—far beyond the economic blockade. It is, he assured, a persecution which has required great sacrifices from his country’s people, aggravated by the pandemic.

The following are significant parts from this conversation with the newspaper:

La Jornada: The pandemic has had very serious costs for Latin America. What has Venezuela done to face it?

Arreaza: It has been very difficult, because we are in a very complex situation due to the blockade and sanctions. For Venezuela to be able to import masks or diagnostic tests or ventilators or antivirals or vaccines, it has to pay. And the financial system of the world does not work with Venezuela, it rejects us. We have our money blocked abroad. They have tried to bring our oil production to zero.

And, in the middle of this war, we were taken by surprise by the pandemic. For Venezuela it is much more expensive than for Colombia, or for Brazil, or for Mexico, to buy a medicine or a vaccine, because of the circumstances.

President Maduro, in January 2020, saw the difficulty that was coming when in China they were dealing with the coronavirus. He organized a commission of the highest level, with a scientific team supporting him, and we started to take early actions such as quarantines, indispensable sanitary measures and treatments.

In Venezuela, if you get sick, your treatments are free. If you go to hospitals or intensive care, it is your right to be treated, to receive antivirals and diagnostic tests. We have a technological system, Sistema Patria, in which more than 20 million Venezuelans are registered, and the doctor goes to your house to pick you up.

We have another method that President Maduro designed, with advice, of course. The 7+7. What does that mean? One week of confinement, where stores are not open and there are many restrictions on transit, and one week of flexibilization. It is a very flexible method, unique in the world.

We made great efforts. That is why we have seen that, while in Brazil there were times when almost 5,000 people died every day, and in Colombia more than 1,000, in Venezuela we have less than 4,000 people dead in the year.

We have counted on the solidarity of China, Russia, Turkey and Cuba, which sent doctors and are sending us vaccines. Thanks to all these factors we have managed to contain the pandemic. But, if we had our assets at our disposal, all Venezuelans would have been vaccinated a long time ago.

La Jornada: Did your public health system withstand the crisis?

Arreaza: This pandemic was the litmus test for the Barrio Adentro Mission and the Integral Diagnostic Centers (CDI). No matter how many problems we have due to the blockade and lack of resources, there is the doctor in your neighborhood, the CDI very close to your home and the hospitals.

We have managed to contain the epidemic. It was predicted in the world’s major media and NGOs that ‘Venezuela is going to totally collapse with the pandemic. It is going to be the epicenter of the virus in Latin America, because there is no investment in health, no investment at all.’ And it turned out that Venezuela has not even come close to being the epicenter of anything in terms of the pandemic in Latin America.

Our health system had the resilience to meet this challenge. Plus good, very well-directed policies and, also, a very significant citizen awareness.

La Jornada: What is the magnitude of the economic blockade against Venezuela?

Arreaza: We have to explain it from the most painful point of view: seeing children who died because they could not have their bone marrow transplant operations, which were financed by PDVSA (the state oil company) through CITGO (the Venezuelan oil company based in the US), which stole it from us.

Or that we cannot import spare parts for the radiotherapy machines of the linear accelerators. And then queues of patients form and people die of cancer. Or, that at one point, we couldn’t bring in medicines for diabetic treatments or for dialysis. Then, we solved it with Russia.

We’ve learned to deal with that. But it’s always more expensive. A ship that touches a Venezuelan port is threatened with sanctions. The insurance they charge us is three times what any country in the world pays. The freight they charge is much more expensive. Trading with Venezuela is a danger for those who do it, because of the persecution we are going through. It is not only a blockade, it is a persecution.

RELATED CONTENT: Review of the Destructive Effects of US Blockade on Venezuela’s Orinoco Oil Belt

La Jornada: How large is the amount of goods expropriated from Venezuela?

However, we would have to calculate the impact of PDVSA having been attacked. Our production fell to 300,000 barrels per day when we were producing almost 3 million barrels a day. We are recovering it. We have worked magic, miracles, guerrilla work and we have managed to bring in spare parts, pieces, but it has been much more difficult, much more costly and has taken much more time. How much production has been lost? Tens of billions of dollars.

La Jornada: Have there been changes toward the relationship with the United States as a result of Donald Trump’s departure?

Arreaza: It is not only the fact that there is another president in the United States, but that we defeated the coups d’état, the attempt to impose a parallel government, the mercenary operations, a very violent part of the opposition. There is a reality and President Biden’s administration seems to recognize that reality. There is less pressure.

La Jornada: For many years, relations between Mexico and Venezuela were very difficult. How are they now?

Arreaza: Despite the differences we had with previous governments, we managed to create with Mexico and other countries the Community of Latin American and Caribbean States [CELAC]. There was ideological and political tolerance. That should be promoted. In these past years it was very hard with Peña Nieto, the Lima Group and the United States, which led the orchestration of the attack and isolation of Venezuela.

Since his campaign as a candidate, President López Obrador was asked about Venezuela and he said ‘but I am going to be president of Mexico, not of Venezuela.’ They insisted on Nicolás Maduro, and López Obrador answered: ‘We will see. He is the president of that country. I don’t get involved in whether he was elected or not.’

He was always very respectful of the Estrada Doctrine, of the Mexican Constitution. He returned to what was the Mexican political tradition of respect for internal processes and the sovereignty of countries. We have a supportive, respectful relationship. We know that President Lopez Obrador is against sanctions, against the blockade. He puts his country at the service of Venezuela for dialogue. We are very grateful that he is our ally, our friend. Respect is what the Mexican government has given us.