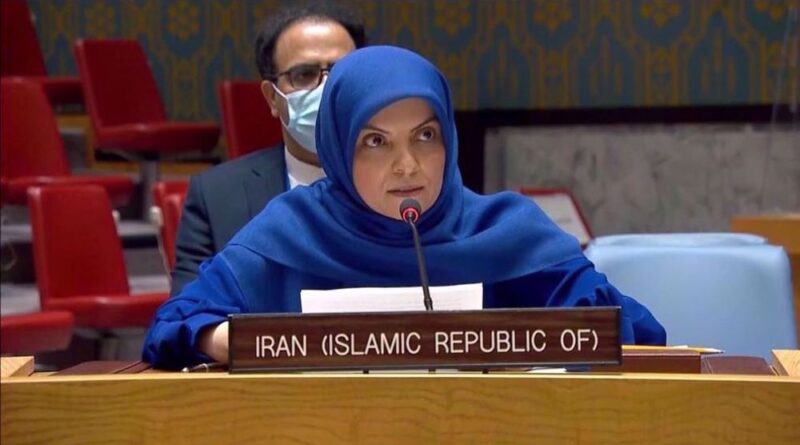 Iranian envoy to the United Nations says the Israeli occupation is “playing victim” to divert attention from its continuing crimes in Palestine, warning the ‘Israel’ against any acts of “adventurism and miscalculations.”

Zahra Ershadi, Iran’s deputy permanent representative to the UN, made the comments in a statement on Friday after a closed-door meeting of the UN Security Council on a recent incident for an Israeli-operated oil tanker in the Sea of Oman.

Ershadi’s comments came in reaction to Israeli War Minister Benny Gantz who said on Thursday that ‘Israel’ is ready to attack Iran and that there must be a global response against Iran.

On Wednesday, Gantz had claimed that Iran has “violated all of the guidelines” in the Joint Comprehensive Plan of Action (JCPOA) which US President Joe Biden wants to restore.

Israel, along with the U.S. and the U.K. have blamed Tehran for the attack on the Israeli-operated tanker off the coast of Oman, the Mercer Street, last week, as it was headed for Fujairah, a bunkering port and oil terminal in the United Arab Emirates, although Iran has denied involvement.

“Immediately following this event, Israeli officials accused Iran of the incident. This is what they usually do. It is a standard practice of the Israeli regime. Its aim is to divert attention of the world public opinion from the regime’s crimes and inhumane practices in the region. To that end, they accuse others of wrongdoing. In almost all incidents in the Middle East, Israel accuses Iran. They do it immediately and provide no evidence. Playing victim, lying and deception are part of their toolbox,” said Ershadi in her statement.

She also said that the ‘Israel’ hue and cry on the Mercer Street incident was aimed, in particular, at concealing its terrorist acts against commercial navigation.