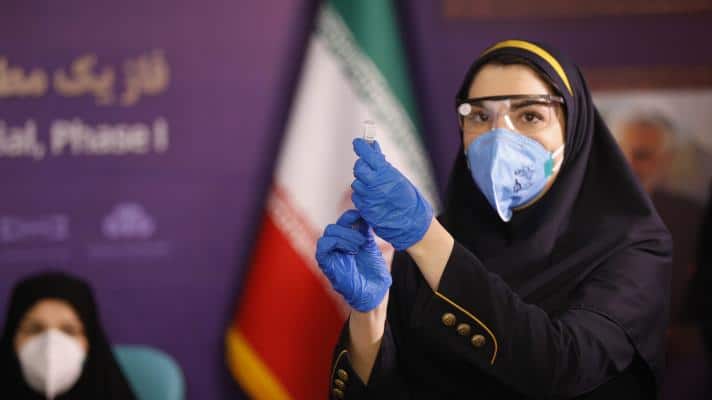 Iran began the second and third phases of human trials on the Coviran Barekat vaccine this week, with the aim of speeding up the process by combining the last two stages of testing.

“We will test the vaccine in 20,000 people in the third phase, administering the injection to two groups to estimate its effectiveness,” said Hamed Hosseini, head of the team behind the clinical trials quoted by the Islamic Republic News Agency (IRNA).

Barekat is the first of three vaccines Iranian scientists are developing to combat COVID-19, all of which are in clinical trials. The second Iranian vaccine, Razi CovPars, began the clinical trial with two volunteers during a ceremony on February 27. The third, called Fakhra, will begin clinical trials with 20,000 volunteers from Tehran and other cities, the Iranian government announced on Tuesday.

Days before, in an interview with IRNA, Dr. Mohamad Reza Salehi, who directs the clinical trials of the Coviran Barekat vaccine, said that preliminary results in 35 of the volunteers who participated in the first phase of the trials showed effectiveness of 90 % to the new coronavirus. Additionally, Iranian officials claimed that Barekat is “100 percent effective” against the covid-19 variant first discovered in the UK.

The first out of a total of 56 volunteers who were accepted for the first phase of the human trials of the vaccine were injected during a ceremony on December 29, 2020. By early February, all volunteers had received both doses.

Mohammad Mokhber, head of Imam Khomeini’s Order, reported that the Barekat vaccine began mass production on Monday, with a production capacity of 3 million doses per month.

Foreign Minister Mohammad Javad Zarif applauded the work of Iranian scientists responsible for COVID-19 vaccines, saying: “We have to defend ourselves on our own.”

The senior official also expressed concern about vaccine hoarding in European countries, as well as in the US and Canada: “The West has stockpiled vaccines three times more than they need.”

The Persian country began its vaccination campaign by administering the Russian Sputnik V vaccine to medical personnel, of which three batches have already arrived. A donation from China of 250,000 Sinopharm vaccine injections was also received.